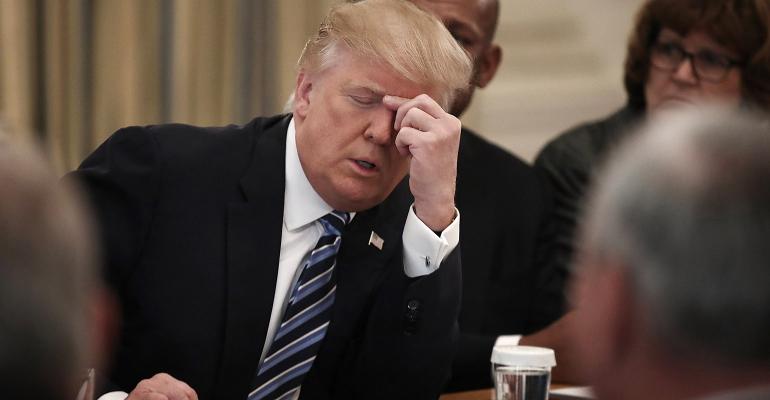 There are repercussions when so many wealthy taxpayers put off their tax bills.

By Saleha Mohsin and Christopher Condon

(Bloomberg) --Wealthy Americans have put off some of their tax bills this year, causing such a pinch to government revenue that the U.S. could face a default on its debt months sooner than the White House expected.

High-income taxpayers may be anticipating a future tax cut from President Donald Trump. But they may also accelerate a political headache for him: persuading Congress to raise the government’s debt limit.

The wealthy may have deferred recognizing as much as 20 percent of their taxable income last year, according to independent estimates, a move that is legal and allows them to delay paying taxes on non-wage earnings including capital gains. Trump’s promise of tax cuts gives richer Americans “large incentives to shift non-wage taxable income from 2016 to 2017,” said Lucy Dadayan, a senior researcher at the Rockefeller Institute of Government. Debates over raising the debt ceiling became especially politicized under former President Barack Obama. Republicans used the specter of a default as leverage to demand spending cuts and other policy changes. Bills to raise the ceiling were commonly passed in the nick of time.

Mnuchin began using special accounting measures in March to stay below the ceiling, and he has projected that the Treasury will run out of money in the second half of the year.

The stakes are high. Global financial markets risk volatility if there is political uncertainty about the U.S. government’s ability to repay its debts. Failure to take action in time could result in the first-ever U.S default. Mnuchin has said he would not prioritize debt payments over other government spending in the event the ceiling isn’t raised.

America’s wealthiest may be partly to blame if the deadline arrives sooner than anticipated. While most people pay their taxes through deductions from their paychecks, richer taxpayers also earn income through the sale of stocks and other assets, or by taking profits out of companies, resulting in capital gains.

“Taxpayers often make their decisions on selling assets based on current tax rates as well as expected future tax rates, among other factors,” said Rockefeller’s Dadayan.

Mnuchin in January vowed that a tax cut -- part of what he says will be the biggest overhaul since the 1980s -- would not benefit the wealthiest Americans, who Trump has said reaped all the benefits of the economic recovery and left lower-income people in despair. More recently, Mnuchin has declined to guarantee that only middle-class taxpayers would receive a cut, saying he may need to make concessions to close a deal with Congress.

Even with a Republican-controlled Congress, advancing the time line for action on the debt limit will be difficult. Lawmakers are already grappling with two complicated and fraught debates: repeal and replacement of Obamacare and the tax overhaul. Both issues threaten to paralyze a Congress where consensus is already weak and mid-term elections next year loom large.

Shai Akabas, an analyst at the Bipartisan Policy Center in Washington, said that a reduction in income tax receipts probably isn’t enough to significantly hasten action on the debt ceiling.

“We don’t see enough evidence yet to show that the entire time-frame that we’re talking about has shifted,” he said. While the research group has cited “heightened volatility” in tax revenue this year, “it’s pretty unlikely that the government will run out of funds to make its payments in August,” Akabas said.

A debt-limit deal is divisive even within the political parties. Republicans are at odds over whether spending cuts should be part of an increase. Democrats, whose votes in the Senate are needed to avoid a default, may use that bargaining chip to demand other concessions. Some lawmakers are also rankled at Mulvaney, who has downplayed the dangers of a default.

Most analysts project that the government has until October or November to raise or suspend the debt ceiling, citing a mandatory payment from the Treasury to a military retirement trust between $50 billion and $100 billion that is due on Oct. 2.

The administration hasn’t clearly signaled the impact of weak tax revenue. Mulvaney, in a hearing in the House on May 24, said that the Treasury Department’s initial assessment showed it would run out of money in “early September." That date has "moved a couple of weeks in advance" because of slower-than-expected receipts.

Mulvaney stands by the remarks, Office of Management and Budget spokeswoman Meghan Burris said Tuesday in an email.

Mnuchin “has been consistent and clear in urging Congress to act as soon as possible to raise the statutory debt limit,” Treasury spokesman Tony Sayegh said.