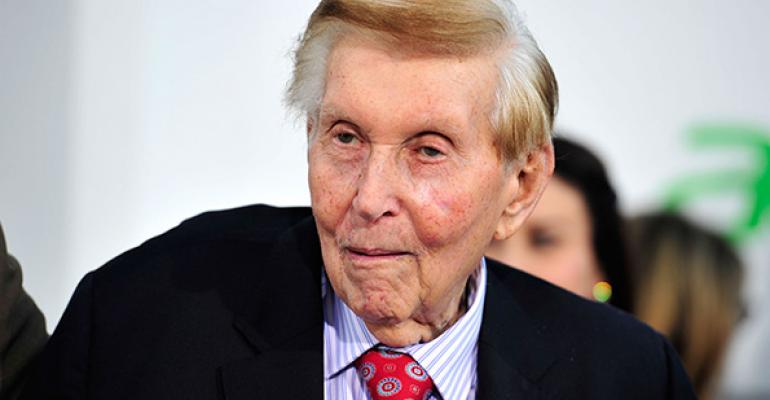 Redstone Has Shot at Quick Trial Victory on `Strong Evidence'

Edvard Pettersson and Christopher Palmeri | May 09, 2016

(Bloomberg) -- The second day of the Sumner Redstone competency trial that started Friday could be the last.

Los Angeles Superior Court Judge David Cowan will decide as early as Monday morning whether to throw out the lawsuit filed by Redstone’s ex-girlfriend, who is challenging the 92-year-old’s mental capacity and seeking to be reinstated as the agent who makes his health-care decisions. Redstone, the controlling shareholder of CBS Corp. and Viacom Inc., may have dealt a decisive blow with his videotaped testimony Friday, which the judge called “strong evidence.”

Redstone’s legal team on Sunday filed a new brief arguing for dismissal, saying “it is abundantly clear that this proceeding is not reasonably necessary to protect Sumner Redstone’s interests.” Lawyers for his former romantic partner, Manuela Herzer, countered that Cowan couldn’t trust what the billionaire said, because of his “serious cognitive impairment.”

In the recorded testimony, which the judge watched after clearing the courtroom of reporters and spectators, Redstone was assisted by an interpreter who at one point asked that his dentures be adjusted so he could be better understood. He was questioned for 18 minutes, and was most articulate when asked about Herzer, using obscenities to describe her. “I hate her,” he said, according to a transcript. “I want Manuela out of my life.”

Cowan said Redstone had communicated “as best he can what he wants,” and told Herzer’s attorney, Pierce O’Donnell, “Your burden is a hard one.” He asked both sides to submit written arguments over the weekend as to whether the trial should continue.

Herzer, 52, claims Redstone wasn’t mentally capable in October 2015, when he kicked her out of his mansion and removed her from his health-care directive. A ruling in her favor could cost Redstone control of his stakes in Viacom and CBS, media giants worth $42 billion. He owns majority voting rights through a family holding company, National Amusements Inc. If he were to be declared incompetent by the judge, it could set in motion a chain of events that would shift control of that company to seven trustees, among them Shari Redstone and Viacom Chief Executive Officer Philippe Dauman.

In their brief Sunday, Herzer’s lawyers said Cowan couldn’t assume Redstone “was expressing his true wishes and beliefs, particularly when those statements were only intelligible to his speech therapist,” the interpreter. “The disparity between Redstone’s responses to questions from Herzer’s counsel and his responses to questions from counsel strongly suggest that Redstone and his speech therapist had been prompted to rehearse ‘his’ responses.”

His lawyers didn’t venture into that territory, saying their client had “testified in the strongest possible terms that he does not want Ms. Herzer in his life, and he does not want her making his health care decisions.”

Redstone testified that Herzer had stolen money from him and lied to him. His testimony was taken Thursday at his home, with questions posed by one of his lawyers, Gabrielle Vidal, and O’Donnell. Redstone didn’t answer some, and often had to be prodded to speak more loudly or more slowly by the interpreter. At some points, according to the transcript, he couldn’t form words and was asked point to letters to spell them out. Shown a photo of himself and Herzer and asked when it was taken, he said, “Who cares?”

His lawyers said in a filing that in the weeks before she was evicted, Herzer spent more than $200,000 using Redstone’s American Express card and had him sign for $40,000 in cash delivered to his house. They said she executed a $5 million grant agreement with Redstone for a foundation she runs.

In all, the lawyers said, Redstone spent about $150 million on Herzer and another former girlfriend, Sydney Holland, who also had briefly been his health-care agent. They exercised “virtually unfettered” control over his money, according to the lawyers. Redstone is worth about $4.5 billion, according to the Bloomberg Billionaires Index. He plans to seek to recover the $150 million from the two, according to a person familiar with the matter who asked not to be identified.

After Herzer’s eviction from the mansion, she was replaced as health-care agent by Dauman and taken out of Redstone’s estate plan; she had been in line to receive $50 million upon Redstone’s death, along with his residence, valued at $20 million. Recently, Shari Redstone assumed the role of health-care agent for her father, with the authority over whether, for instance, he should be fed or hydrated if he himself can no longer make his desires known.

The witnesses scheduled to testify about Redstone’s mental health and the alleged plotting and scheming by those around him include ex-girlfriends, geriatric psychiatrists and his nurses. Others will include Shari Redstone, with whom he has had a rocky relationship, and a granddaughter who claims Redstone needs court protection from his daughter.

In his opening argument, O’Donnell said Shari had orchestrated a palace coup to get rid of Herzer, surrounding Redstone in “a circle of deceit” with nurses and staff who spied on Shari’s behalf. In a statement Friday, Shari Redstone called that “total fiction with no factual basis.”

O’Donnell said Redstone was “unable to answer the simplest questions” during his testimony. “It was anguishing to watch and painful to hear.”

Robert Klieger, an attorney for Redstone, said in his opening remarks that his client doesn’t tolerate lies and needs to trust the people around him. Nobody questioned Redstone’s mental capacity when he threw Holland, the other former girlfriend, out of his house in August and removed her from his health-care directive, Klieger said.

According to Klieger, Herzer lied to Redstone about Holland and a third woman, Terry Holbrook. She tricked him into leaving voicemails on her number when he thought he was calling Holbrook and created fake letters from Holland. “He obsesses about women,” Klieger said.

Another witness Friday, Stephen Read, a psychiatrist hired by Herzer to examine Redstone, told the judge that Redstone displays symptoms of dementia. Read said Redstone bet with family members on televised sports games and didn’t realize they were recorded, and that the others let him win. Read described his personality: “Anger emerges quickly and readily, short-circuiting everything else.”

He said Redstone didn’t have the mental capacity to understand the consequences of his actions when he removed Herzer as his health-care agent. Redstone told him during the exam that Herzer stole $40 million but he wasn’t able to elaborate, Read said, and acknowledged his money was managed by responsible people in Boston.

Joseph Octaviano, one of Redstone’s nurses, testified that he kept Shari Redstone secretly informed about what was going on at her father’s house and he knew she wanted to use the information to get Herzer thrown out.

The staff hugged and high-fived each other after Herzer was evicted, Octaviano said.