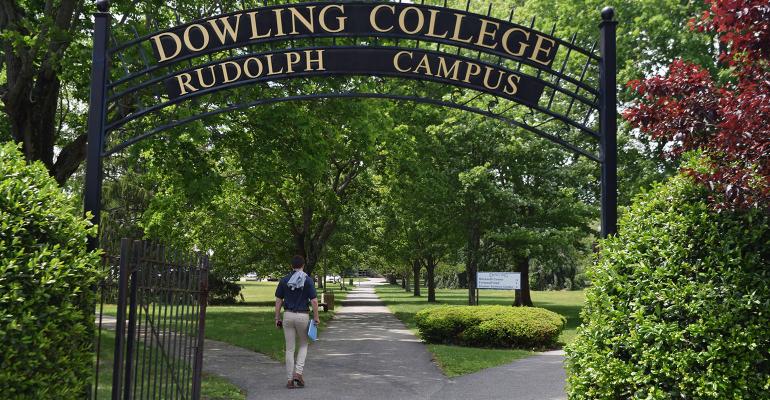 Attorneys general will have to navigate legal thickets to dispose of relatively tiny sums as small colleges close at rates more than three times higher than before the recession.

(Bloomberg) --When Dowling College on Long Island closed last year, it left a few things that will be easy to unload. There’s the waterfront mansion and a score of houses. There are 13 cars and a couple of boat trailers.

One thing off limits is the $2 million endowment, restricted by a tangle of bankruptcy law.

“We’re figuring it out now,” said Robert Rosenfeld, the school’s chief restructuring officer. “The likely scenario is that those funds are going straight to the AG’s office.”

Attorneys general will have to navigate legal thickets to dispose of relatively tiny sums as small colleges like Dowling close at rates more than three times higher than before the recession. They leave behind not just physical plants, but the shriveled remnants of endowments, which are a well of frustration for donors’ descendants, vendors owed money and bondholders. The biggest victims may be the states that have to expend mighty efforts to settle minuscule amounts of cash.

“The attorney general or state regulators are going to have to get more involved in bankruptcy cases,” said Lawrence G. McMichael, a Philadelphia lawyer who last year represented Morris Brown College when it sought protection from its creditors.

In 2016, 763 higher-education institutions closed, including for-profit schools, according to the U.S. Department of Education. That’s the most since 2012.

Four-year, nonprofit institutions at risk rely heavily on tuition to cover expenses, a structure that Moody’s Investors Service deemed inefficient in a 2015 report. The ratings company predicted that closures of those colleges would triple to about 15 annually, most with fewer than 500 students. Many are affiliated with religious denominations.

“Catholic schools are winding down,” said Janet Mills, the attorney general of Maine, who helped close Bangor Theological Seminary in 2013. “Girls don’t want to be nuns anymore. You have to do something with those funds that’s actually going to help people.”

Bankruptcy courts operate under federal law, but endowments aren’t considered property of colleges because they don’t fully control their use. Instead, a patchwork of state laws governs endowments, said Susan Menditto, the director of accounting policy at the National Association of College and University Budget Officers.

“There’s really no template,” she said.

In many states, the money must be used for a similar purpose as the original intent, setting up a financial feeding frenzy.

In New York, the attorney general’s charities bureau must find non-profits with similar mission to receive endowment funds. The agency is currently engaged not just with Dowling College, but the troubled College of New Rochelle.

“We have begun to see some institutions that have difficulty paying their bills,” said Jim Sheehan, who heads the bureau. “In the face of these events, our office has a responsibility.”

Dowling began as extension of Adelphi University, becoming its own entity in 1968. Its jewel was a former Vanderbilt mansion that once housed the Royal Fraternity of Master Metaphysicians, a sect that attempted to raise an "immortal baby" in the late 1930s by never introducing the child to the concept of death or disease.

The school catered to local students and specialized in aviation, business and education training at two Long Island campuses. Enrollment declines decided Dowling’s fate. Its freshman class fell 50 percent between 2011 and 2015, according to Moody’s.

Weeks after Dowling’s spring 2016 semester, students discovered via email that the school would close. Social-event schedules for the fall semester still hang on bulletin boards around the Oakdale campus.

"The buildings were falling apart, teachers were being laid off, but I never thought they would just shut the doors with no warning," said Justin Carlson, who had just completed his junior year.

Dowling’s property and other assets could be worth half a billion dollars, well over the $66 million that creditors like Carlson and bond holders have claimed, according to court documents. Anything in excess of those claims will make the trip with the endowment to the attorney general office, Rosenfeld said.

Often, there are no scraps left to fight over. An intact endowment for a failed institution is rare, said Art Rebrovick, restructuring officer for Virginia Intermont College in Bristol, which closed in 2014.

“The endowment was on the books for $4 million, but it had been leveraged and used for faculty salaries so many times that there was just literally no money there,” Rebrovick said.

Sweet Briar College, a leafy oasis of Virginia gentility, attempted a different approach. The women’s college announced in May 2015 that it would close after years of budget problems and its $85 million endowment would facilitate a smooth transition for students and faculty.

Instead, graduates rallied to keep the school open. But this year’s freshman class was 75 women short of its 200 student goal, according to local news reports. Alumnae agreed to free $16 million of endowment funds for operations.

“It’s a nice story that they kept the school open, but the sad truth is that they’re most likely just delaying their fate, and making it an uglier closure than it had to be,” Rebrovick said.

Meanwhile, Dowling’s creditors wait to see what happens with the endowment, and if it’s relatively tiny, its importance looms large to them.

"I billed them, they never paid, then I hear they go under,” said Alex Cruz, owner of AE Auto Service in Long Island.

His bill for a tire service and inspection is less than $40.