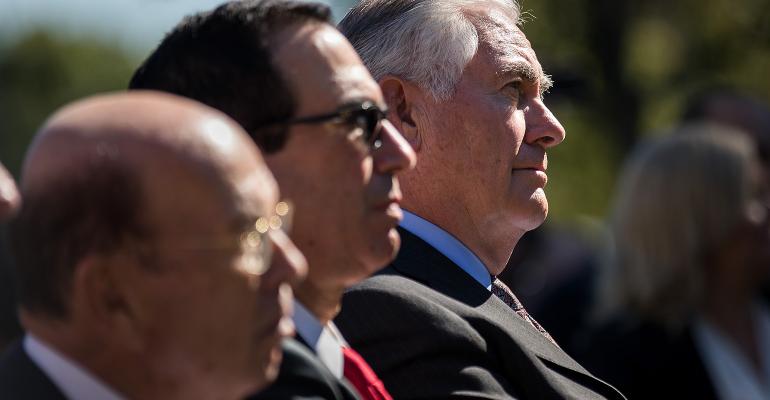 House leaders want to pass the bill by Thanksgiving, in roughly 2 1/2 weeks.

But the Republican chairman of the House Ways and Means Committee indicated Sunday that the panel would stick to its plans to consider the bill this week. Representative Kevin Brady said he believes lawmakers “have a pretty good handle” on how to address the erosion to the U.S. tax base that results when corporations shift profit offshore. House leaders want to pass the bill by Thanksgiving, in roughly 2 1/2 weeks.

The bill that Brady released last week would impose a 20 percent excise tax on certain payments that U.S. companies make to overseas affiliates -- a potential source of profit shifting to tax havens. It also called for a tax of roughly 10 percent on some foreign profits for corporations going forward. The excise tax measure has already drawn opposition.

For individual investors, the bill contains a provision aimed at curbing a strategy under which investments are routed through reinsurance companies in tax havens to gain a U.S. tax break. While the legislation doesn’t name specific industries or countries, hedge funds have used the strategy in Bermuda, which doesn’t levy a corporate income tax.

In all, the bill is “very weak” on combating aggressive tax evasion by both corporations and individuals, said Jack Blum, a Washington lawyer who’s an expert on financial crime and international tax abuse. Blum is a former staff counsel to the Senate Foreign Relations Committee who played a key role in congressional investigations that led to the Foreign Corrupt Practices Act in 1977.

Initial reports about Apple, Nike, Ross and Cohn don’t allege any behavior that would violate U.S. tax law. Based on the reporting that appeared Sunday, “nothing here is necessarily illegal,” said H. David Rosenbloom, an international tax lawyer at Caplin & Drysdale and a former senior Treasury tax official in the late 1970s. “There’s nothing illegal about Americans having either an offshore account or an interest in an offshore company.”

Nonetheless, the disclosures suggest that the rapid schedule House leaders plan to use to advance their tax bill is inadequate, said Clark Gascoigne, the deputy director of the Financial Accountability and Corporate Transparency, or FACT, Coalition. The non-partisan policy group focuses on combating offshore tax abuse.

“It doesn’t make sense to move forward with marking up the tax bill before we can see all the documents,” Gascoigne said in an interview Sunday. “There are serious concerns about what this tax bill would do to address these offshore problems.”

Treasury Secretary Steven Mnuchin didn’t mention the reports on offshore tax havens during a public forum in southern California on Sunday evening, and instead doubled down on his desire to get a tax reform bill for the president to sign this year. White House Senior Adviser Ivanka Trump, speaking at the same event, said the Trump administration will push an aggressive time table on tax reductions.

Additional reports are expected, perhaps as early as Monday. On Sunday, the International Consortium of Investigative Journalists reported that an offshore law firm named Appleby -- which produced many of the 13.4 million documents that journalists obtained -- had overseen the business affairs of a wide assortment of prominent U.S. hedge-fund executives, corporate leaders and private-equity partners. They include Paul Singer, Steve Schwarzman, Carl Icahn, Robert Mercer, Sheldon Adelson, Steve Wynn, Tom Barrack and brothers Charles and David Koch.

While current U.S. tax law permits individuals to use an array of offshore accounting maneuvers to minimize their taxes, many such strategies could prove politically combustible if additional details are released.

During a break from a meeting of Ways and Means Republicans Sunday afternoon, Representative Mike Kelly of Pennsylvania said he hadn’t heard any discussion of the news reports. But House Minority Leader Nancy Pelosi’s office called for committee hearings to explore the reports.

“Only by understanding the potential abuses that would occur through offshoring under the Ryan-McConnell proposal can Congress write a code that ensures that everyone pays their fair share,” said Pelosi aide Drew Hammill.

“These reports also raise questions about a number of Trump allies, his billionaire buddies, and multinational corporations worldwide that have so much to gain from this Republican tax bill,” said Representative Lloyd Doggett of Texas, the top Democrat on the Ways and Means’ Subcommittee on Tax Policy. He also called for delaying consideration of the legislation.

In general, the bill would cut the corporate income tax to 20 percent from 35 percent and cut individual income-tax rates for most income groups. It would create new rules for partnerships, limited liability companies and other so-called “pass-through” businesses and cap the tax rate on their business income at 25 percent, down from 39.6 percent currently.

With regard to corporate profit-shifting, the bill proposes a 20 percent excise tax on payments corporations make to offshore affiliates for royalties or other so-called “costs of goods sold.” Another provision would apply a tax rate of roughly 10 percent to “high returns” from some offshore affiliates going forward -- though it’s unclear what’s meant by high returns.

“Congress must immediately halt action on the proposed tax bill and launch a comprehensive investigation into the activities revealed by these leaks,” said Gawain Kripke, policy director for Oxfam America, an anti-poverty group that’s among the donors to the FACT Coalition.

But others said the news reports underscore why the committee needs to move quickly. “It shows why the tax-reform elements within the tax-cut package are so important and why it is so vital to move quickly,” said John Feehery, a Republican lobbyist and former House leadership aide.

In naming Apple, the ICIJ report said documents show the company “shopped around Europe and the Caribbean for a new island tax shelter after a U.S. Senate inquiry found that the tech giant had avoided tens of billions of dollars in taxes by shifting profits into Irish subsidiaries.”

The report cited one email exchange in which Apple’s lawyers asked the Appleby law firm to confirm that a move to an offshore tax haven would allow one of the company’s Irish units to “conduct management activities ... without being subject to taxation in these jurisdictions.”

A spokesman for Apple declined to comment. The ICIJ reported that the company said it explained the new arrangements to government authorities and that they did not reduce the company’s tax payments.

European Union regulators have told the Irish government it must collect back taxes totaling 13 billion euros ($15.1 billion) from Apple, saying the country offered the company tax benefits that gave it an improper competitive edge. The EU has cracked down on other U.S. companies as well.

The ICIJ report also contains a brief mention of Nike. It says: “The files also reveal how big corporations cut their taxes by creating offshore shell companies to hold intangible assets such as the design of Nike’s ‘Swoosh’ logo and the creative rights to silicone breast implants.” Nike didn’t immediately respond to a request for comment.

Based on the documents unearthed by the ICIJ, the New York Times reported Sunday that Ross retained investments in a shipping firm he once controlled that has significant business ties both to a Russian oligarch who is subject to American sanctions and to President Vladimir Putin’s son-in-law. The Times report also said the files contain references to Cohn, “who was associated with 22 Bermuda entities” in his previous roles at Goldman Sachs Group Inc.

Cohn was Goldman’s president and chief operating officer before he joined Trump’s administration. He played a leading role in negotiating the tax framework that preceded the House bill that emerged last week.

The White House press office didn’t immediately respond to request for comment. Trump and several members of the administration are traveling in Asia this week.