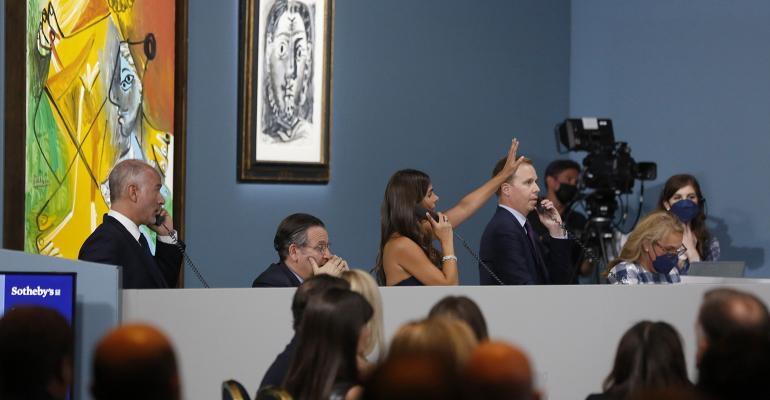 Christie’s, Sotheby’s, and Phillips are back to selling large groups of artworks priced above $15 million.

(Bloomberg) -- During the height of the Covid pandemic, big-ticket art transactions were mostly conducted in private.

Behind closed doors, Sotheby’s reportedly sold a Giacometti bronze for more than $90 million, while Christie’s is said to have sold sold a Frida Kahlo painting for more than $130 million.

Billionaires, it seemed, were more comfortable buying and selling in private.

“The volume of private transactions for works priced between $5 million and $50 million increased between 2019 and 2020, from 30 to 50,” says Brooke Lampley, chairman and worldwide head of global fine art at Sotheby’s. “The supply of masterworks during the pandemic was somewhat constrained at the public level, but the buyer appetite remained very strong.”

That’s set to change during this November’s marquee evening sales in New York. A booming art market, along with several major public sales results, has reassured superrich consignors that their spectacularly expensive artworks are ready for the klieg lights of a live auction.

Christie’s will kick things off on Nov. 9 with its 21st century auction, which includes a Basquiat from 1982 with a high estimate of $80 million and a painting by Peter Doig valued in excess of $35 million.

Two days later it will follow up with the sale of the late oil baron Edwin Cox’s collection, which includes a Caillebotte estimated in the region of $50 million, a van Gogh in the region of $40 million (the sale has three van Goghs in total), and a Cézanne that has a high estimate of $55 million.

Right after that, the auction house’s 20th century sale will include a whopping nine lots with a high estimate of $15 million or above, including a painting by Cy Twombly estimated to sell in the region of $40 million. The combined low estimate for both nights’ evening sales at Christies is $650 million.

“We came into this season very confident, because we’re seeing such strong demand across the board for art at every level,” says Sara Friedlander, the deputy chairman of the postwar and contemporary art department at Christie’s in New York. “I do think people are more confident putting things up at auction publicly.”

Sotheby’s, meanwhile, will hold its sales a week later, starting with the hotly anticipated collection of Harry and Linda Macklowe, the octogenarians whose divorce shook loose a collection estimated to sell for at least $600 million.

On Nov. 15, Sotheby’s will auction 35 of these artworks (more will be sold in the spring), which together carry an estimate exceeding $400 million.

Lots are still being released for Sotheby's modern evening auction, which will take place the evening of Nov. 16; already though, a rare Frida Kahlo has been announced with a high estimate of $50 million.

Even the much smaller Phillips, whose evening sale will take place on Nov. 17, announced that it would be selling a painting by Francis Bacon that carries a high estimate of $45 million.

“The market of people willing to buy and invest in art is stronger than ever and would appear to be growing,” Lampley says. “And where there are buyers, generally there are sellers.”

During the pandemic, buyers from Hong Kong and mainland China emerged as a potent market force.

Despite, or perhaps because of, the country’s wobbling real estate industry and sporadic but increasing crackdowns on its superrich, China’s art market is still on a tear.

“Before the pandemic, there were maybe five to 10 collectors [in China] at the very, very top of the market who knew what they were doing, knew what they were looking for, and were able to support those high-end works of art,” Friedlander says of collectors willing and able to purchase $20 million-plus modern and contemporary artworks.

“What we’ve seen across the board is a completely new community of collectors who love buying at auction at that level,” she continues. Demand in China “is like nothing we’ve ever seen before.”

The November sales won’t be the first live auctions since Covid struck—the London auctions earlier this fall had spectators, as did Sotheby’s recent Picasso sale in Las Vegas—but this will be the first time a massive evening sale will have a live auctioneer in front of a live audience. (The auctions will also be livestreamed.)

“It impacts the mood,” says Lampley. “Having people bidding and participating in the sale room brings an energy that conveys confidence and optimism in the market.”

It doesn’t, she continues, “necessarily mean there’s more bidding, but the optics—when it’s distributed in different ways, complementing bidders on the phone as well as online—contributes to a particular kind of drama.”

Friedlander has a slightly different take.

“I think people get more carried away online than they do in the room,” she says. “There’s an adrenaline junky thing where you’re bidding online and clicking away. In the room, the anxiety of raising your hand is a different kind of feeling.”

Regardless, at least from a dollar perspective, the auctions are beginning to look more like the pre-Covid era. So, will November mark a return to a billion-dollar sales week?

“I wouldn’t be inclined to put the cart before the horse,” Lampley says. “Every season is still a brick-by-brick process from start to finish.”