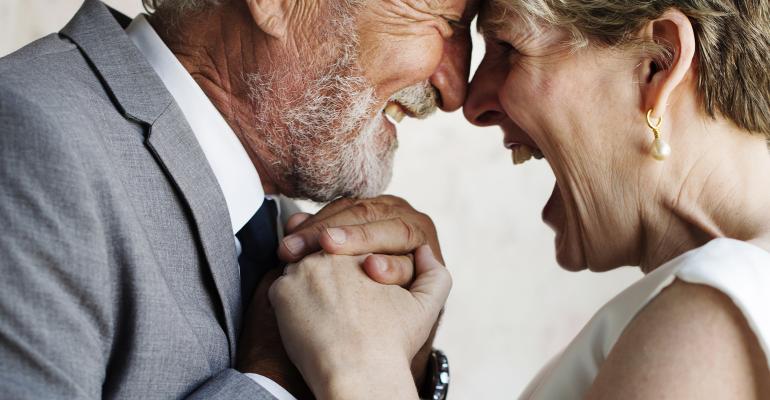 Never Too Old for Love

Clients considering getting married later in life face many issues.

We all remember the lyrics from that famous tune: “First comes love, then comes marriage, then comes baby in the baby carriage.” While these words may be music to the ears of a young couple, clients who are considering getting married later in life have many issues to think about prior to tying the knot.

In fact, many years ago, as a young elder law attorney (not an oxymoron) one of my first cases involved representing a man who was in a nursing home and had become “friends” with a woman across the hall. One thing led to another and the next thing you know, he was inquiring as to what the legal consequences would be if he married his new friend. That’s how I got into this area of law that’s now called “elder law.”

One thing is for sure: a marriage later in life will certainly complicate any estate and financial planning decisions previously made, such as who will be the beneficiary of your client’s assets upon his death and who will be responsible for making financial and healthcare decisions in the event he’s incapacitated. For example, under the New York Health Care Decisions Act, a spouse has priority over an adult child to make medical decisions for an incapacitated spouse in the absence of a healthcare proxy. This may or may not be what your client wants. There are also rules governing whether your client’s spouse must be the beneficiary of certain retirement accounts he owns. In addition, the amount of Social Security benefits available to your client may be affected. The list of things to consider goes on and on. Don’t get me wrong: I’m not suggesting that clients shouldn’t get married in their golden years. I’m simply saying that there are a lot of things to consider prior to making the right decision for your client and his family.

One of the most important things to consider is that by getting married your client will be responsible for the Long-Term Care expenses of his new spouse. So, if she needs care at home, in assisted living or in a nursing home, he’ll have to pay for it even if he keeps his money separate. The reason for this is that the law considers the marital unit as one when applying for means-tested government benefits such as Medicaid to pay for LTC. This is a big issue since LRC is expensive, costing more than $200,000 a year in some cases. Moreover, prenuptial agreements between the spouses aren’t valid for Medicaid purposes because Medicaid wasn’t a party to the original agreement. This can be a rude awakening to everyone involved if proper planning isn’t done. One solution to consider is LTC insurance. This type of insurance must be purchased prior to getting a chronic illness such as Alzheimer’s disease. Thus, your client can’t wait until he’s on the nursing home doorstep before considering this product. In fact, the earlier it’s purchased, the lower the premiums and the more likely it is that your client will be approved. While LTC insurance is expensive, so is the cost of LTC. To determine if it’s right for your client, he must work with a reputable insurance person knowledgeable in these matters.

Also, remember that just because your client gets married later in life, doesn’t mean that the marriage won’t end in divorce. The financial risks of divorce in a later-life marriage are typically greater than the risks associated with a divorce of a young couple. That’s because, as people age, there tends to be greater potential for a disparity in income and assets. In the event of a divorce, all marital property will be subject to an equitable distribution. Of course, your client can enter into a prenuptial agreement if both parties are willing and able. If your client is married at the time of death and there’s been no waiver of spousal rights, then your client’s surviving spouse will be entitled to a right of election against his estate. While the rules are complicated, generally speaking, the right of election is equivalent to one-third of your client’s estate. As with any legal rule, there are always exceptions and things that aren’t subject to the right of election. Clients should proceed cautiously in this area and make sure they get expert advice. By addressing these issues up front, your clients can save their estate and their family’s costly and time-consuming legal battles down the road.