/sites/all/themes/penton_subtheme_wealthmanagement/images/logos/footer.png
Recent
Recent
Apollo Makes $1 Billion Bet on Indian Property With Lending Plan
May 16, 2022
McDonald’s Quits Russia as Country’s Isolation Increases
May 16, 2022
5 Simple Tips To Becoming a LinkedIn Pro
May 13, 2022
Growth by Design
May 13, 2022
Featured
The 10 Best and 10 Worst States in Which to Retire in 2021
Jul 15, 2021
Poll: 15 Classic Books on Investing and the Markets
Apr 03, 2020
Fifteen Must-Listen Business Podcasts for Advisors
Aug 14, 2020
Celebrity Estates: Jay Leno and Planning for Classic Car Collections
Feb 22, 2022 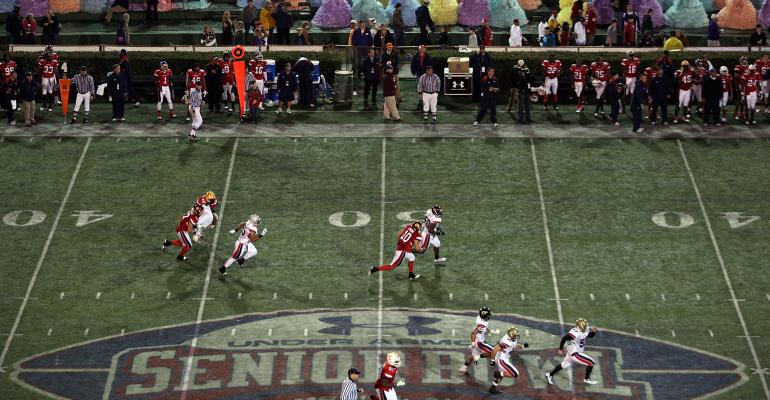 <p>Over 30 percent of the some 250 players selected in the NFL draft each year are Senior Bowl participants. </p>
Wealth Planning>High Net Worth

Morgan Stanley Global Sports and Entertainment (GSE), a division of Morgan Stanley Wealth Management that works with athletes and entertainers, said on Tuesday they were working with the Senior Bowl to bring financial planning educational programs to high-caliber college football players who are on the road to multi-million dollar contracts. The program is also being offered to the players' parents.

The Senior Bowl is an invite-only exhibition football game held in late January in Mobile, Ala., that brings the nation's top senior collegiate players to compete in a North vs. South game under NFL coaches. A large number of the players will be draft picks and it's a valuable showcase for the pros. Over 30 percent of the some 250 players selected in the NFL draft each year are Senior Bowl participants.

The three months between the Senior Bowl and the NFL draft in the spring is a whirlwind of preparation for these players, and GSE has tailored their program to that agenda.

“Things for these young men are going to start moving very quickly," said GSE managing Director Drew Hawkins. "We want to offer them a roadmap from the Senior Bowl to the first day of the NFL season. From contracts to budgets to the very basics of living, like buying food and furniture.”

Hawkins says there is no sales element to the program and no push to recruit the athletes as clients, but the weekend will likely be the first time many players have met with financial advisors.

The program emulates an athlete's circuit training: There is a quick introduction from coaches and a presentation of the documentary about Antoine Walker, the former NBA star who pulled in over $100 million during his career but still went bankrupt.  Walker is working with the Morgan Stanley team to bring his cautionary tale to the younger athletes. Each team will be divided into 4 groups to run “drills” with GSE advisors, after completing the drills, they will go back for a question and answer session with former NFL player Bart Scott.  GSE says that Scott and Antoine will be available throughout the game weekend for more personal discussions with players who may be embarrassed to ask their questions in front of a large group.

Hawkins said the program will focus on general money concepts and basic money management; how to say “no” to family and friends; resisting financial temptation; being prepared to go, in many cases, “from rags to riches;” and a discussion of how to vet professional advisors.

This year, for the first time, GSE is also running a seminar exclusively for the parents of the players.

“Because these players are so much larger than life on the field, it’s easy to forget that they’re just kids. For many, their parents are still heavily involved,” says Hawkins.

Many of the parents will experience the same sudden-wealth shock as their kids, and at the bowl will have a chance to talk with the parent of a professional athlete on how to navigate the change.

“The idea is to offer parents an opportunity to connect with someone who has gone through the process before,” said Hawkins.