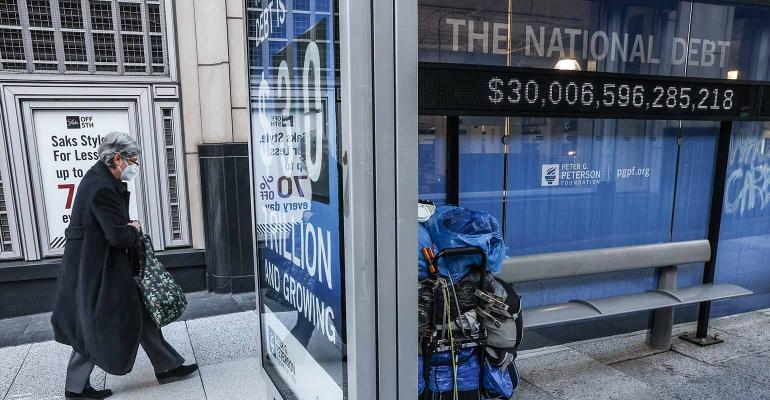 Overly associating current inflation with the long-term problem of escalating government debt will not help with either issue.

At the dawn of February 2022, the U.S. national debt climbed above $30 trillion, a figure representing 25 times the value of all U.S. currency in circulation. Simultaneously, inflation reached levels not seen in almost 40 years. Things have only gotten worse with the recent war in Ukraine.

While some inflation was inevitable as the economy recovers from its pandemic doldrums, the current rate has set off economic alarm bells. With many Americans already feeling the sting of price hikes, and client's likely looking to trusted professionals for answers, it is a good time to take a deeper look at deficits, debt, inflation and what the Federal Reserve can and cannot do to help.

Some commentators have mistakenly referred to a “$30 trillion deficit,” adding to longstanding confusion between deficits and debt. A government deficit occurs in a single year, when spending exceeds revenues. If the federal government takes in $750 billion in taxes during a particular year but spends $925 billion on programs, then the U.S. Treasury incurs a deficit of $175 billion for that year.

The national debt, on the other hand, measures the cumulative effect of deficits over time. Suppose, for example, the U.S. starts a decade with no national debt. Throughout the decade, the federal government runs an average annual deficit of $150 billion. Each year, the government meets its obligation to pay interest on money borrowed, but does not pay back any principal. The end result is a national debt of $150 billion X 10 = $1.5 trillion.

The last time the federal government had zero debt, Andrew Jackson sat in the Oval Office. The current $30 trillion national debt represents the end result of over 185 years of government borrowing, overseen by 39 different presidents.

Is It True That Foreign Powers Own the U.S. National Debt?

To bridge budget deficit gaps, governments need to borrow money. A common belief, popularized by many politicians, holds that the U.S. government is primarily kept afloat by foreign lenders. However, this claim is more provocative than accurate.

For a variety of complicated reasons that go to the heart of what money actually is, the U.S. Treasury does not just take out loans. Instead, it issues government-backed securities, mostly Treasury bonds (longest maturity period), T-bills (shortest maturity period), and T-notes (intermediate). These securities sell for less than their face value, which they attain at maturity. Hence, cashing in a mature bond amounts to receiving a sizable interest payment on the initial investment.

The American public—including individuals, trusts, mutual funds, and companies—holds the majority of these securities. Foreign governments, especially China and Japan, do own a minority share, but that fact reflects their own economic strategies more than U.S. desperation. Oddly enough, agencies within the American government hold about as much of the national debt as other nations.

The concept of the U.S. government owing money to an agency of the U.S. government is a bit brain-bending, but there is logic behind it. Some agencies have revenue streams outside the general federal budget. For instance, Social Security tax (the primary component of FICA taxes) goes directly to the Social Security trust fund. The revenues going into the trust currently exceed annual benefits payments, so the Social Security Administration buys Treasury securities to get an investment return on the surplus.

Adding to the complexity, since 2009, the U.S. Federal Reserve has also held some of the securities making up the national debt. By law, the Fed cannot keep any profits. As a result, when the Fed disposes of Treasury securities, it surrenders any gain back to the Treasury. Congress has often exploited this dizzying budgetary circle to make deficits look smaller.

Do Deficits and the Debt Really Cause Inflation?

With both the national debt and the inflation rate passing worrisome milestones, politicians and analysts have been quick to connect the two. However, as I discussed in a previous article on Milton Friedman’s economic theories, the relationship between deficits, debt, and inflation is far from simple.

Ballooning federal deficits and skyrocketing debt have in fact been the norm over the last 35 or more years, with inflation remaining quite tame for most of that period. Thus, any claim that rising national debt inherently drives prices upward does not hold water. In fact, Friedman posited that the primary driver of inflation is not the status of the federal budget per se, but the overall size of the money supply.

The link between debt and inflation lies in the fact that government spending can increase the amount of money flowing through the economy. For example, the stimulus payments issued during the pandemic put money directly into consumers’ pockets. People with more money seek to buy more goods, and if that demand spike occurs at a time of strained supply, prices climb quickly. In this way, the pandemic created a perfect inflationary storm.

In short, the current bout of inflation has no particular connection to the total national debt, but likely does stem in part from specific, recent deficit spending. Slowing the growth of the debt would not necessarily ease inflation, but reducing the money supply almost certainly would. The Fed will play a central role in that process.

Efforts to alter the money supply make up U.S. monetary policy, one of the primary tools available to combat inflation. In sluggish economic times, the Fed seeks to increase the flow of money, a process known as quantitative easing (QE). When overheating economic activity drives prices upward, the Fed goes the opposite way with quantitative tightening (QT).

Problems arise with this traditional form of monetary policy when an interest rate change would have adverse side effects. In our current economic situation, for example, the need for QT might make a rate increase of some amount inevitable. However, with many businesses still struggling to rebound from the pandemic slowdown, making borrowing too difficult could bring the national recovery to a jolting halt. This concern has led many economic experts to turn their attention to the Fed’s balance sheet.

The Federal Reserve Balance Sheet and Its Meaning

In recent years, the Fed has become a regular buyer of Treasury securities. This practice has made it possible to pump money into the economy at a time when interest rates were already at historic lows. Holding these securities has beefed up the Fed’s balance sheet, which is basically just an inventory of assets and liabilities. Currently, this inventory includes well over $2 trillion in Treasury bonds, T-notes, and T-bills, along with trillions more in mortgage-backed securities.

The Fed now proposes reducing its balance sheet by selling off a chunk of its Treasury holdings. Given the value of those securities, a sell-off would enable the Fed to sequester a sizable amount of currency without a major interest rate bump. In theory, at least, this 21st-century QT strategy could tame inflation without dragging down the economy as a whole.

For the balance sheet reduction approach to work, there must be willing buyers for the Fed’s securities. That could mean more of the national debt passing into foreign hands. Furthermore, no amount of QT will fix broken supply chains, which nearly all experts see as a critical step in getting inflation under control.

Why the Federal Reserve Cannot Reduce the National Debt

The swirling debates about deficits, debt, and inflation continue to fuel misconceptions about what Federal Reserve actions can accomplish. In particular, some reports have wrongly described reducing the Fed’s balance sheet as a way to lower the national debt.

In reality, trimming the Fed’s balance sheet and other QT strategies are anti-inflation measures, not anti-debt measures. For one thing, the Fed holds less than 10% of the national debt. More importantly, selling those securities will not alter the national debt by a single penny; it will only shift ownership of the debt.

Therefore, while QT actions may hold great promise for throttling down the current inflation surge, we cannot look to the Fed for help with the debt. Only Congress can address this issue, and any realistic approach involves hard choices.

How We Could Actually Pay Down the U.S. Federal Debt

Ultimately, the only way to reduce the national debt is the same way individuals lift themselves out of the financial red: by paying off principal. And the only entity with the power to do that is the one controlling our national purse strings, namely Congress.

Deficit spending necessitates additional borrowing, making principal payments impossible. Therefore, Congress would first need to enact annual budgets with a surplus of revenues over spending. The Treasury could then use each year’s surplus to buy back securities without issuing new ones.

Unfortunately, the only strategies shown to be effective in converting deficits into surpluses historically do not garner a lot of popular appeal. Bottom line, the government must increase revenues, reduce spending, or both. Voters often express support for spending cuts, yet their support evaporates quickly when the cuts affect a program they expect to benefit from one day.

Similarly, raising taxes would provide an immediate revenue boost, but citizens are not exactly lining up to contribute more to the federal coffers. More importantly, by reducing disposable income, tax increases could eventually stifle the economy, resulting in lower wages and lower federal revenues over the long haul.

Nevertheless, any reliable debt reduction plan will necessarily include some combination of austerity measures and targeted tax increases. Economists have suggested a couple of ways to reduce the sting of these actions.

Conclusion: An Unknown Limit and an Uncertain Future

Nearly all experts agree that current inflation levels in the U.S. are unsustainable and must be brought under control soon. By contrast, opinions differ widely on whether the soaring national debt actually poses an imminent economic threat. Historically, many economists saw 77% of annual GDP as the clear cutoff line for debt sustainability. Debt above that level, they believed, would inevitably spiral out of control, crushing a country’s economy for decades.

By that standard, the U.S. should be in real trouble, since our $30 trillion debt is over 130% of the nation’s current GDP. The fact America seems to be chugging along fairly well, all things considered, has many analysts rethinking the conventional wisdom. Researchers primarily arrived at the 77% figure by studying the often tragic fates of developing nations whose currencies do not have the global sway of the U.S. dollar. Meanwhile, Japan’s debt sits at well over 200% of GDP, and no one sees the Land of the Rising Sun as a place of economic ruin.

The truth is we simply do not know how much national debt is too much, and that kind of uncertainty is inherently uncomfortable. By the time we discover the real limit on debt, the nation might have passed a point of no economic return.

In any event, overly associating current inflation with the long-term problem of escalating government debt will not help with either issue.

Harvey Bezozi is a CPA and CFP. More information can be found at YourFinancialWizard.com