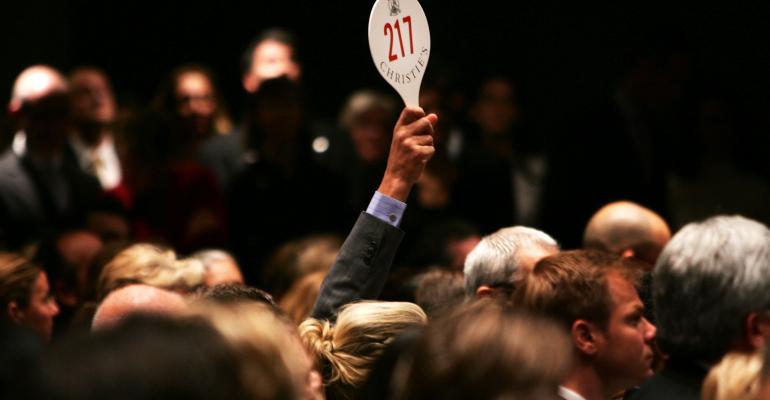 Sotheby's and Christie's are vying next week to sell collections of contemporary art from the heirs of Jerry Spiegel and his wife Emily.

(Bloomberg) --In the art world, auction houses Sotheby’s and Christie’s are like squabbling siblings—more alike than different, yet always trying to one-up each other.

Next week in New York, the two rivals are vying to sell separate collections of contemporary art from two actual siblings—at virtually the same time. Perhaps fittingly in the circumstances, the two sisters aren’t on speaking terms.

The competition involves the grown daughters of the late Jerry Spiegel, a onetime Long Island farmer turned real-estate mogul, and his wife, Emily. The couple had a lucrative avocation: finding young artists destined for greatness. They amassed early works from future superstars such as Jean-Michel Basquiat, Julian Schnabel and Jeff Koons.

The Spiegels, who died eight years ago, left their art to their two daughters, who each received half of its estimated value. For this month’s auctions, one chose Christie’s and the other, Sotheby’s—though not without intrigue within the houses themselves. The companies expect the works could sell for more than $160 million, the two largest art consignments of the bellwether spring auction season.

The dueling auctions on May 17 and May 18 illustrate the challenges of valuing estates involving art, as well as the hard edges and personal animus underpinning what might seem a genteel business.

Lucrative estates are crucial for the auction houses. Specialists spend decades cultivating relationships with wealthy families and their attorneys in the hope of being chosen when the time comes.

Estates let companies—in one fell swoop—get their hands on a variety of works at a range of prices. Auction companies collect a commission that declines as the price of the item increases and typically ranges from 25 percent to 12 percent.

“The more modestly priced pieces piggyback on the monumental pieces,” said Warren Weitman, a former Sotheby’s chairman who set up its trusts and estates group in 1979. “It’s a win-win.”

Estate sales of bold-faced names create buzz. In November, New York-based Sotheby’s sold the art collection of the late rock star David Bowie. Some 56,000 fans filed through its galleries to view the works, which reaped $41.1 million. In 2011 and 2012, London-based Christie’s sold actress Elizabeth Taylor’s art, clothes and jewels for $183.5 million.

Still, big estates carry special risks. Savvy clients increasingly pit the companies against each other to extract the best deals. In particular, the sellers ask for guarantees of a minimum price the works will fetch, regardless of the bidding at the auction. If buyers don’t step up, the house is on the hook for the difference.

In 2015, for example, Sotheby’s agreed to forgo its commission from selling the collection of the late A. Alfred Taubman, its former chairman, until sales reached $509 million. The news sent Sotheby’s shares plummeting.

Though the Spiegel trove is smaller, the couple were nonetheless major art patrons, landing on the annual ArtNews list of top 200 collectors in the 1990s. They gave Andy Warhol’s “Double Elvis” to New York’s Museum of Modern Art. The painting, depicting two overlapping images of the rock star brandishing a gun, has long been a centerpiece of the museum’s contemporary galleries.

The Spiegel daughters—Pamela Sanders, 60, and Lise Spiegel Wilks, 59—were in a long-standing feud of unknown origin when their parents died in 2009. Two years later, Long Island Business News reported that they “have been on the outs for more than a dozen years” and don’t speak to each other. People close to both sides confirmed that this was still the case. Pamela declined to comment, and Lise didn’t return messages.

Still, the sisters have much in common. Both graduated from the University of Pennsylvania, are married to men in the real-estate business and support the arts and education through their family foundations.

In September 2016, their parents’ art was divided between the siblings. Then, the jockeying for each daughter’s works began.

Sotheby’s struggled to hold on to the elder sister. Two company executives who worked closely with Pamela Sanders’s side of the family—Gabriela Palmieri and Alex Rotter—left last year. Rotter moved to Christie’s, where he started in March. Palmieri continued working with the Sanders family as their art adviser.

“It was Sotheby’s business to lose because of Gabby and Alex,” said Arthur Sanders, Pamela’s husband. “We weren’t hiring the building. We were hiring the people in the building.”

During a pitch in February for the elder daughter’s business, Christie’s made a sentimental appeal while discussing the financials and marketing, her husband recalled. Images of the main artworks, which had been in storage since the Spiegel parents died, decorated the walls of the boardroom. Each time Pamela Sanders looked up, she would see her parents’ legacy.

A third New York auction house, Phillips, which offered a guarantee of more than $126 million, also bid and lost, according to a person close to the deal. Phillips spokesman Michael Sherman said the company is prudent about guarantees and “competitive in the marketplace.” Christie’s and Sotheby’s representatives declined to comment.

Pamela Sanders, who declined to be interviewed, ultimately consigned to Christie’s more than 100 works, most of her art inheritance. They include a 1964 painting by the German artist Sigmar Polke, who died in 2010 and was known for mixing historical and commercial images in works that critiqued consumer culture. Depicting a woman eating a sandwich, it could sell for $20 million, according to the auction house.

Another that could be similarly valuable: the American artist Christopher Wool’s white canvas that spells the word “PLEASE” in black six times.

The younger sister—who isn’t disclosed as a seller—chose Sotheby’s, according to people familiar with the auction. She is selling only one work, a jewel of her parents’ collection: a painting depicting a massive human skull by the late Jean-Michel Basquiat, the Brooklyn-born painter known for raw, graffiti-inspired works.

Sotheby’s guaranteed Lise Spiegel Wilks would collect more than $60 million for the painting, which her parents bought in 1984 for $19,000.

No doubt, the Spiegel parents hoped that both sisters would end up with inheritances of roughly equal value. But that’s never assured when parents bequeath art. Unlike IBM shares, its value is hard to pin down.

“Until you sell it,” said Woodham, the former Christie’s executive, “you don’t know how much it’s worth.”

In fact, according to a person familiar with the matter, Christie’s just last year had estimated that the Basquiat was worth $45 million—$15 million less than the current guarantee.

At least for now, the elder sibling seems to be ahead in terms of raising money from her parents’ art. For her 107 works, Christie’s guaranteed that Pamela Sanders will collect more than $100 million.