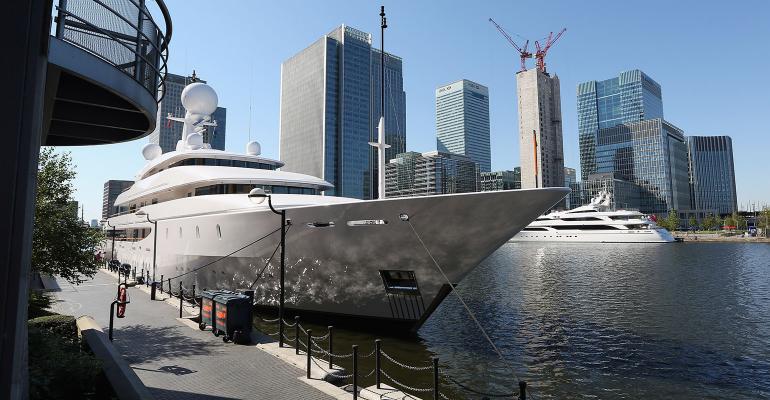 New York to retains the top spot for the ultra-rich.

(Bloomberg) --The super-rich will continue to flock to London, despite the political and economic concerns around the U.K.’s intention to leave the European Union, according to a report published on Wednesday by property broker Knight Frank LLP.

The number of ultra-wealthy people living in the U.K. capital is expected to climb by 30 percent to 6,058 over the next decade, the report showed. These are people with $30 million or more who private banks such as UBS Group AG and Citigroup Inc. love to court.

The projected increase may ease doubts about the city’s appeal stemming from an 80 percent slump in applications for investor visas last year, following the introduction of anti-money laundering checks in 2014. Only 215 wealthy people were granted such visas, according to data published last week by the U.K. government.

New York retains the top spot worldwide as expectations for U.S. economic growth override a period of uncertainty as the Trump presidency takes shape, according to the Knight Frank report, which cited research by Johannesburg-based consultancy New World Wealth. “The forthcoming Brexit process will not result in an outflow of wealthy individuals from the U.K.,”  Andrew Amoils, head of research at New World Wealth, said in the report. “Rather, it will mean that existing high-net-worth individuals will be more likely to remain and indeed to be joined by a growing list of new arrivals.”

Newcomers see the U.K. as the dominant center for business and financial services in Europe, as well as being the only English-speaking major economy in the region, according to the report. Traditional links with the U.S., Canada, Australia and New Zealand will strengthen after Brexit, it showed.

London nonetheless languished in 92nd place in Knight Frank’s ranking of luxury residential market performance included in the report. Prices slid by 6.3 percent in 2016, mainly due to tax changes, although sales volumes increased and sentiment improved at the end of the year, Knight Frank said. Prime residential prices will remain unchanged in 2017, while the cost of properties in cities such as Shanghai and Sydney will advance, according to the report.

The number of ultra-high-net-worth individuals globally rose to more than 193,000 in 2016, helped by stock-market gains. It will exceed 275,000 by 2026, advancing most swiftly in Vietnam, Sri Lanka, India and China, according to the report.

China will grow even more rapidly if it creates more high-tech companies such as Huawei Technologies Co., Amoils said in a separate email.

The number of billionaires will soar to 3,000 over the next 10 years as faster-growing economies such as China and India create new wealth, the report showed. The development of high-tech, financial services, media and health-care industries in these countries is expected to help boost private wealth for a 48 percent global increase in people with $1 billion or more in net assets. Asian cities led by Pune, Ho Chi Minh City, Hyderabad and Bangalore are expected to be among those with the most rapid ultra-wealthy population growth over the next 10 years. At the same time, Mumbai will probably join Shanghai, Beijing, Singapore and Hong Kong in the top 10 locations for the super-rich.

Almost a third of ultra-wealthy people plan to invest in real estate outside their main country of residence, Knight Frank said. Chinese investment in U.S. residential property rose to more than $30 billion in 2015 from “barely” $300 million in 2006, and now accounts for nearly one in five foreign purchases, according to the report.

Knight Frank expects China to introduce further restrictions on wealthy citizens sending capital abroad, after authorities tightened the rules defining acceptable investments for transfers of money out of the country. Those rules exclude property transactions, according to the report. Not all regions are expected to show stellar growth rates during the next decade. The ultra-wealthy populations of Germany, France, Italy and Spain will have lackluster growth, with some affluent individuals expected to leave continental Europe, according to the report.

Constraints include “a combination of rising taxes and higher state-pension obligations and public health-care costs, and the loss of high-skilled jobs to Asia,” Amoils said in the report.

The super-rich population in Nigeria fell 20 percent in 2016 due to “economic and political tensions” and isn’t expected to grow in the next 10 years. The west African oil producer is therefore “worth watching as a potential hot-spot for wealth creation,” Geoffrey Yu, head of the U.K. investment office of UBS’s wealth-management division, said in the report.

Ultra-wealthy migrants are expected to cluster around at least half a dozen “safe haven” jurisdictions such as the United Arab Emirates, Monaco, Israel and Canada, lured by fiscal and political stability and a better quality of life, according to the report.