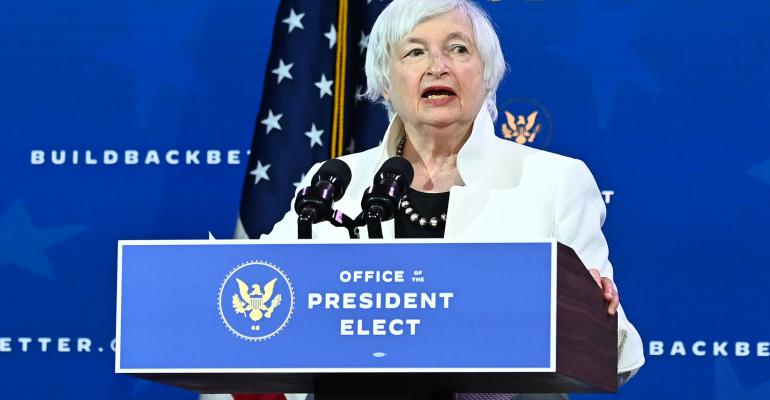 A Letter From 9 Million U.S. Expats to Janet Yellen

The next Treasury secretary could make the lives of millions of Americans easier at no cost at all.

(Bloomberg Opinion) -- Dear Janet Yellen: Congratulations! You’re probably the next Treasury secretary of the U.S. That’ll throw you into daunting policy cauldrons — from financing America’s massive deficits to managing China and taming the tax code. With so much in your inbox, we urge you not to forget about one large group of Americans: us.

We’re U.S. expats, and there are 9 million of us. If we were a state, we’d be the eleventh-largest. And we’re suffering from a problem that you can fix.

Related: Twenty-Five Passports HNW Clients Are Hoping to Find Under the Tree

We ended up abroad because we got a job in Canada, married someone in France or retired in New Zealand. For others among us, “abroad” is actually home, because we’re “accidental Americans” — we were born in the U.S. but never lived there.

No matter how we ended up with U.S. passports, all of us are subject to American taxation, as well as annual bank and asset reporting requirements so onerous and complex that many experts don’t fully understand them. And that’s just the start of our troubles, as we’ve tried to explain before.

The U.S. is the only country in the world that practices citizenship-based taxation. All other nations tax individuals based on their residence. OK, Eritrea also taxes its diaspora, but that’s not exactly the same thing.

We certainly don’t live abroad to avoid taxes. After all, we already pay tax in our countries of residence, which tend to have higher rates than the U.S. We can take these foreign taxes as a credit on our U.S. returns, so most of us never owe anything to the Internal Revenue Service. But that makes the huge compliance burdens, and the Draconian penalties for innocent mistakes, all the more unnecessary.

Many of us can’t lead normal financial lives because we’re snared in two incompatible tax systems simultaneously. We can’t invest or save for retirement like our neighbors or other Americans because either the U.S. or our country of residence won’t recognize the other nation’s financial products and rules. We can’t even open bank or brokerage accounts, because financial institutions won’t take us.

Many of us escape by renouncing our U.S. citizenship. But the U.S. has been making that more expensive and difficult in recent years. And most of us would hate to give up our nationality anyway.

If we had representation in Congress as a bloc, this problem would have been solved long ago. But we don’t. Instead, we vote in the U.S. state where we lived most recently. And our representatives and senators don’t think listening to our concerns can help them get re-elected. So while a legislative fix is our preferred option, we’re not holding our breaths.

That’s where you come in. As Treasury secretary, you will oversee the two bureaus to which we expats must file reports, the IRS and the Financial Crimes Enforcement Network (doesn’t that name say it all).

There are simple tweaks you could make that would cost the U.S. nothing in lost revenue, save you a packet in enforcement expense and make our lives easier. The options are laid out in an essay I commend to everyone on your staff: “A Simple Regulatory Fix for Citizenship Taxation,” by John Richardson, Karen Alpert and Laura Snyder.

One option is to change the rules on particular compliance nightmares that have become obsolete. Here’s just one example.

In the 1980s, the U.S. adopted harsh rules to discourage Americans from deferring income in overseas finance vehicles (called passive foreign investment companies) that weren’t required to distribute income and gains as they accrued. But that was before the international boom in mutual funds, which are also considered PFICs. Nowadays, U.S. expats often end up owning these without even knowing it — for example, if they’re automatically enrolled in a retirement scheme by their overseas employer.

The U.S. taxation of such PFICs — that is, plain-vanilla but foreign mutual funds — is ruinous. Moreover, the reporting requirements are so Kafkaesque that many professional accountants refuse to take clients who own even one. And yet, in most developed countries, mutual funds are regulated almost exactly like their U.S. analogs and must also distribute all income and gains.

At a stroke, your Treasury could change the regulations to exempt an entire category of funds from PFIC reporting, starting with these run-of-the-mill retail investments. In the same way, you could tweak dozens of other nonsensical rules.

But there’s an even simpler step you could take. Contrary to lore, there’s no U.S. statute that ties U.S. nationality to tax liability. Instead, the Treasury established that link in past regulations. This means you, Dr. Yellen, can break the link again.

Our proposal — as laid out in detail by Richardson, Alpert and Snyder — is that you introduce a new category of taxpayers, in addition to the many you already have. It could be called “qualified nonresidents,” and would include U.S. citizens who live permanently in another country and pay taxes there as though they were its nationals.

These qualified nonresidents would be exempt from filing returns to the IRS and FinCEN, and from paying taxes on any income that’s not sourced in the U.S. They already don’t owe anything, so the revenue loss would be close to zero. Moreover, the IRS could divert its own resources from this complex and unprofitable enforcement area to others that are more worthwhile.

This change would align American taxation of individuals with the systems of all other developed countries. It would free us expats to live, earn, save and invest as other people do. And whenever any of us move back to the U.S., we’re yours again. Never would it have cost so little to help so many with such negligible fuss. Please consider it.

To contact the author of this story:
Andreas Kluth at [email protected]