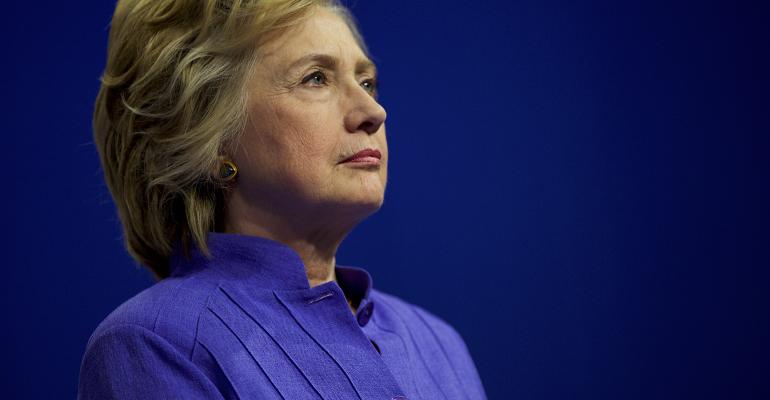 Let's look at what tax planning suggestions we can offer after reviewing Hillary Clinton's tax return.

Democratic presidential nominee Hillary Clinton recently released her 2015 federal individual income tax return, which was filed jointly with her husband Bill Clinton. With income in excess of $10 million per year, the Clintons find themselves in the highest income tax bracket. Leaving politics aside, we thought it would be interesting to take a look at what tax planning suggestions we could offer after reviewing her return. Here’s what we came up with.

The Clintons earned $10,168,272 of self-employment income in 2015 from book royalties, speaking engagements and consulting, resulting in the payment of $301,698 in self-employment tax. As self-employed taxpayers, the Clintons pay both the employer and employee share of Social Security and Medicare tax, at rates of 12.4 and 2.9 percent, respectively. A 0.9 percent additional Medicare tax applies to earned income over $250,000 for taxpayers married filing jointly. Although not disclosed on the publicly released return, we can infer the additional Medicare tax of $82,264 based on the available details.

The Clintons could consider conducting their business activity through an S corporation rather than personally. Profits earned from an S corporation are taxed as ordinary income but wouldn’t be subject to self-employment taxes. As shareholder-employees of their respective corporations, both of whom are providing significant services, the corporations would need to pay reasonable salaries. If they each paid themselves a salary of $500,000 from their S corporation and took the remainder of their earnings as corporate profits, they would save over $348,000 of Medicare and additional Medicare tax. However, the media pilloried previous political candidates, such as John Edwards and Newt Gingrich, for the same strategy. Understandably, Mrs. Clinton may not want the same media attention, Internal Revenue Service scrutiny or the cost of additional corporate tax returns.

Although reporting a high level of self-employment income, the disclosed tax return shows no deduction for self-employed retirement plans. The Clintons could establish and fund a retirement plan based on their self-employment earnings and generate a current income tax deduction as well as benefit from tax-deferred growth. For example, the Clintons could have contributed $53,000 each to a simplified employee pension individual retirement arrangement (SEP-IRA) for 2015, resulting in a $106,000 deduction and saving roughly $43,000 in federal income tax. Alternatively, and given that both of the Clintons are over age 50, establishing individual 401(k) plans would allow for catch-up contributions of $6,000 each in addition to employee and employer contributions of $106,000. Other retirement plan options in lieu of the SEP-IRA or 401(k), such as a cash balance pension plan, could provide an even greater tax benefit. It should be noted that both of the Clintons are close to age 70 ½, at which point they would need to begin taking required minimum distributions from their retirement accounts and paying tax on the distributions at ordinary rates, but the initial deferral and subsequent tax-deferred growth of these plans provide immense benefit.

The Clintons list a New York address on their personal return and are widely known to own residences in both New York and Washington, D.C., jurisdictions with top income tax rates of 8.82 and 8.95 percent, respectively. Although the 2015 state income tax returns weren’t released, Federal Schedule A reports a state and local income tax deduction of $1,369,277, confirming the Clintons pay a substantial amount of state tax. Understandably, Mrs. Clinton had little choice regarding her state residency during her time in various government positions, and depending on November’s election outcome, may have little choice during the next four years. However, high net worth taxpayers such as the Clintons must factor state residency into their overall tax planning.

For example, New York considers individuals residents for income tax purposes if their domicile is the state of New York or they’re deemed to be statutory residents. Domicile is a taxpayer’s permanent home, so unless a taxpayer clearly demonstrates a change to a new domicile in a different state, New York will continue to treat them as residents for state income tax purposes. Further, individuals maintaining a permanent home in New York and spending more than 183 days in the state during the tax year are considered New York statutory residents. Although New York can still tax nonresidents on source income, which includes income from services performed in the state, proper planning could help the Clintons establish their domicile in a location without state income taxes. Calendar management could help avoid the statutory residency rules, thus resulting in significant state income tax savings. Additionally, some states, such as New York, allow spouses to file separately for state tax purposes even when filing jointly for federal if one spouse is a resident and the other is a nonresident. Even if Mrs. Clinton’s residency isn’t flexible, perhaps Mr. Clinton could be convinced to establish residency in Florida and file separately for state purposes to garner a benefit.

Above are just a few of the opportunities we observed from reviewing Hillary Clinton’s tax return. The viability of any tax planning always depends on the client’s risk tolerance, as well as their personal facts and circumstances. But, whether Democrat or Republican, in the face of today’s high federal and state tax rates, now is a great time for all high net worth taxpayers to carefully review their income tax planning options to minimize their tax burden.​