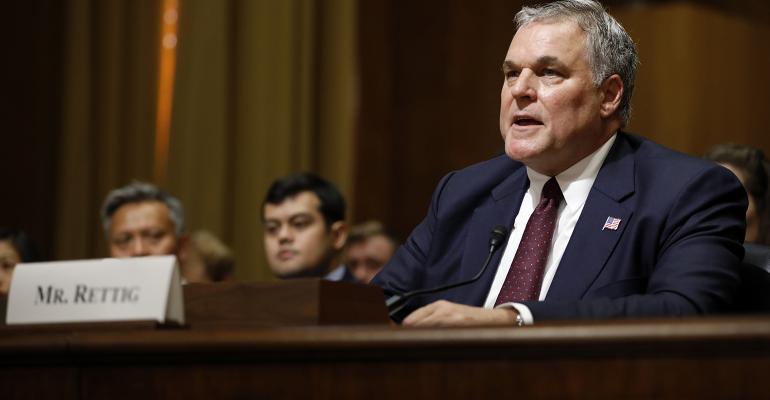 IRS Commissioner Wants to Tax in Many Tongues

Embracing a broader range of non-English speakers and upping staff are at the top of the agenda, but enforcement remains paramount, Rettig says.

Internal Revenue Service Commissioner Charles Rettig laid out his priorities for modernizing the IRS in a keynote address Monday at the AICPA Engage 2019 conference in Las Vegas.

Two issues loomed large—expanding the languages in which taxation is conducted as well as increasing the staff at the IRS itself.

“You’re going to see a significant shift, I think within the year, of what comes out of the Internal Revenue Service regarding the ability of people who speak numerous languages,” Rettig announced.

“If I want to book a hotel in another country,” he explained, “that hotel’s website will have a bunch of flags across the top that will convert everything on the site into whatever language the flag represents. Yet the IRS can’t do that. Why?”

He also offered a personal anectdote about his early days in office, “In my second or third week, I asked in a meeting ‘How many languages do we do things in?’ And somebody, very proudly said, ‘Six. Including Vietnamese, Russian and Chinese’—I’m from Los Angeles, so I asked ‘Which Chinese—Mandarin or Cantonese?’ And people are just looking down. We need to have a bigger focus on getting it right. It’s a respect factor. If you want communities to respect us, we need to speak their language.”

Commissioner Rettig openly acknowledged the lack of manpower at the IRS, made more evident during the recent government shutdown, and he praised Congress’ recent announcement of a proposed $12 billion budget for the agency.

“There is bipartisan feeling that this country needs a fully functioning IRS.” He explained. “The IRS last year collected about $3.5 trillion gross revenue, which if you want to put it into statistics is about 95% of the revenue of the U.S. government. In order to function properly the government requires a fully functional IRS. We’re linked in a very real manner.”

Though he recognizes that the $12 billion will likely be whittled down before it’s finalized, he was still optimistic. “We’re hiring. We’re hiring across the board. Large business, international, small business, criminal investigation and IT.”

The presentation was not all sunshine and rainbows. The commissioner, who previously worked for over 30 years as a tax litigator, also offered a stern warning for unscrupulous practitioners.

“Don’t embarrass yourselves.” He warned. “Don’t go there. I’m an enforcement guy. This is not the old IRS. Yes we have fewer employees and fewer resources, but this is 2019. Data and analytics are spectacularly useful.”

If Rettig’s intention was to put the tax community on notice that there’s a new sheriff in town and that things are going to change, consider the message received.