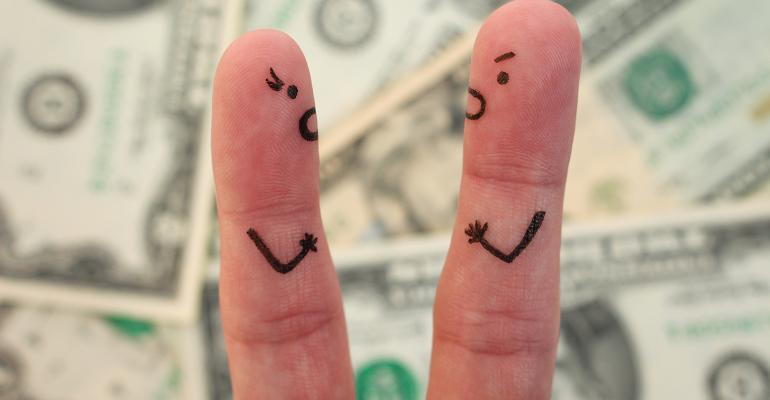 IRAs, Divorce and the Wisdom of King Solomon

There could be unexpected tax ramifications if your client decides to try and “split the baby.”

When advising a client going through a divorce, you must settle a number of differing property issues. Of particular concern are the special rules governing individual retirement accounts. If the transfer of an IRA isn’t properly handled in relation to the divorce, it can lead to adverse, and likely unexpected, tax consequences.

While a qualified domestic relations order is required when transferring a portion of a qualified plan pursuant to a divorce, federal law doesn’t require one for IRAs because IRAs aren’t subject to the anti-alienation requirement applicable to qualified plans. Instead, the process of dividing an IRA in a divorce is referred to as a “transfer incident to divorce.” Generally, when splitting an IRA in such cases, the division is completed by working with the IRA custodian to: (1) change the name on the existing IRA to that of the former spouse or (2) transfer the portion of the IRA awarded to the former spouse to the former spouse’s own IRA.

Private Letter Ruling 9344027 (Aug. 9, 1993) highlights an example of a transfer that doesn’t satisfy this requirement. In this ruling, married taxpayers separated and entered into a written separation agreement. Under the agreement, one-half of the husband’s IRA was to be transferred to an IRA in the wife’s name. This action, however, was being done pursuant to a private, written separation agreement. The couple wasn’t divorced and wasn’t contemplating filing for divorce, nor were they legally separated. There was no assertion on the part of the taxpayers that the IRA division was in the nature of a transfer under a divorce or separation instrument as defined in the IRC. Accordingly, the IRA distribution was deemed taxable to the husband and wasn’t treated as the property of the wife. A separation agreement that isn’t “incident” to a decree of divorce isn’t sufficient to make the IRA transfer nontaxable.

Transfer of Interest in IRA

Even if there’s a proper decree of divorce or separate maintenance or a written instrument, a transfer pursuant to such documents can still trigger income tax if not properly completed.

For example, if one spouse is ordered to pay the other spouse cash in the divorce settlement and then takes a distribution from his IRA to satisfy such requirement, it results in a taxable transfer. The reasoning behind this conclusion is that the order is for cash rather than a portion of the IRA.

In addition, if a taxpayer takes a distribution from his IRA and pays the cash to his former spouse to satisfy the requirement to pay a portion of his IRA to the spouse, that would also be a taxable distribution. (The recent Kirkpatrick v. Commissioner, T.C. Memo. 2018-20 decision illustrates this point adroitly.)

On a related matter, one of the exceptions to the early distribution penalty is when the IRA owner takes a series of substantially equal periodic payments. Once such a series is started, it needs to continue until the later of five years or the IRA owner’s attainment of age 59½. Except under limited exceptions, no modification can be made to the series during that time without triggering the 10 percent early distribution penalty retroactively to the start of the series.

There have, however, been a number of private letter rulings allowing the participants to reduce their series of periodic payments in relation to their new account balance following a divorce. They’ve been allowed to reduce their payments because the IRA balance was reduced after the divorce. In PLR 200202074 (Jan. 11, 2002), for example, the taxpayer maintained an IRA from which he was taking a series of substantially equal periodic payments. During the period of the series, he and his wife divorced, and the wife was awarded one-half of the IRA. As a result, the taxpayer wanted to reduce his monthly distributions from the IRA by 50 percent. The taxpayer requested the IRS to rule that he could reduce his payments without it being considered a modification of his series of substantially equal periodic payments. The IRS allowed the taxpayer to reduce his payments without triggering a modification.

In similar cases, it’s recommended that the taxpayer get his own PLR before reducing his payments to avoid triggering the penalty for a modification, given that there’s no solid support for this under the tax law, and a PLR can only be relied on by the taxpayer who requested it.

Finally, in light of the elimination under the Tax Cuts and Jobs Act of the federal tax deduction for post-2018 alimony payments, practitioners representing a retirement plan owner should also consider advocating for the award to a former spouse of an interest in a retirement plan rather than the payment of alimony.