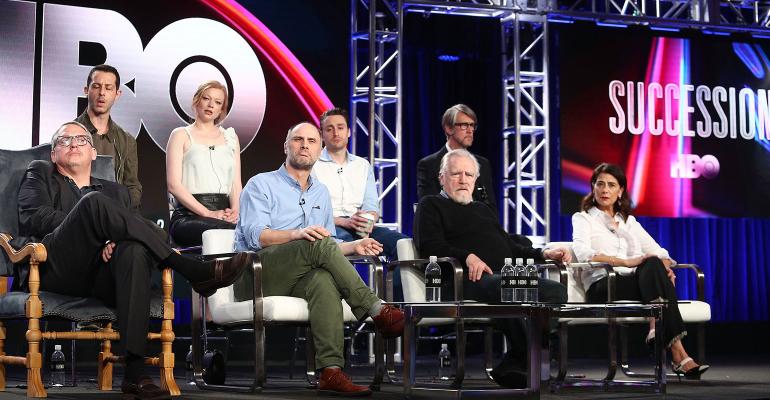 (Bloomberg) --An elderly chief executive officer gets sick, and his children scheme to take over the company. News of his illness sends the stock tumbling while management tries to contain the fallout. A story ripped from the headlines? Perhaps, but it’s also the plot of one of the year’s biggest television hits, a likely streaming favorite as financial professionals kick back on their August vacations.

The series provides a unique view into a world rarely understood, let alone intelligently explained, by television viewers outside the confines of Wall Street. Logan Roy, played by Brian Cox, is at the helm when he suffers a stroke, forcing his panicky children to scramble in a bid to stabilize the plummeting share price. While Logan is ill, his son Kendall, played by Jeremy Strong, takes over and immediately has to deal with a $3 billion debt crisis triggered by the stock drop.

Sound familiar? The scene is partly based on a real-life crisis faced by Sumner Redstone’s holding company, National Amusements, almost a decade ago, Succession creator Jesse Armstrong says, in an interview. (That company had to sell more than $200 million of non-voting Viacom and CBS shares in order to pay down debt.) Armstrong, who made the HBO series with the help of actor Will Ferrell and The Big Short director Adam McKay (both executive producers), says he consulted a Wall Street Journal reporter to make sure the examples were grounded in real life.

“We tried to follow what we thought was truthful that would happen in this type of situation,” Armstrong says. “We felt like there needed to be consequences for Logan’s incapacity, and this felt like a good example of details that might be lurking in the corporate structure once you get to know more about it.”

The example rang true with Paul Sweeney, a media analyst with Bloomberg Intelligence. “A lot of executives will borrow against their stock holdings at the company where they work,” says Sweeney. “They’ll go to a brokerage firm and say, ‘Will you lend me against it?’ and use the stock as collateral.”

Members of Logan’s family also debate how much of his illness to share with the public, with some suggesting that little be said in order to stem the fallout. In the real world, companies frequently wrestle with how to handle news of a CEO’s illness, which can send stocks plunging. When Fiat Chrysler disclosed that CEO Sergio Marchionne had died in late July, the company’s stock dropped 12 percent in one day. Investors were similarly rattled when Apple Inc. announced that Steve Jobs was ill in 2009, when American International Group Inc. said Robert Benmosche had cancer in 2010, and United Airlines revealed that Oscar Munoz had been hospitalized in 2015.

Hollywood has a long tradition of riffing on real-life events. Shows as far back as the 1950s used news as a basis for television episodes. The Defenders, a courtroom drama that ran from 1961 to 1965, shot episodes based on real events and issues.

“It was always in a producer’s toolbox, but it was something that was only used occasionally back in those days,” says Tim Brooks, a former network executive and TV historian.

Writers started using the tactic more frequently over time. The legal procedural Law & Order, which first aired in 1990, made a regular habit of taking New York news stories and turning them into suspenseful episodes. “The DNA of that show was to base it on current events,” says Brooks. “Virtually every episode was built on real headlines, and the practice has gained traction since then.”

In recent years, money and business have figured prominently in that calculus. From Billions on Showtime to HBO’s Silicon Valley and FX’s Trust, stories of rich people getting richer have become a popular part of modern American television.

“The richest guy in town has always been of interest to an audience,” says Mitchell Stephens, professor of journalism at New York University. “People have learned in recent decades to see the drama in business events and to look more behind the scenes in large enterprises,” he says. “There’s something that seems to intrigue us when corporate titans don’t act corporate.”

Some shows go deeper than others. While Bobby Axelrod, played by Damian Lewis, deploys snippets of hedge fund jargon on Billions, the characters in Succession weave more complex calculations of corporate finance into their dialogue. In the first season, Kendall is forced to deal with his $3 billion debt calamity by calling his father’s bankers to renegotiate terms. He places the call in his all-glass office, a chart with the company’s plunging stock price evident on a screen behind him. The banker ultimately wants his money back, and Kendall turns to private equity for salvation. This becomes an even bigger problem later—but we won’t spoil it for you leveraged buyout fans.

Apart from the debt issue, the show has introduced additional realistic subplots, including a discussion about how to deal with a sexual harassment scandal. That straight-from-2018 thread is set to play out in the coming season.

Armstrong—whose other hits include the film, In the Loop, and the television show, The Thick of It—says future storylines may involve additional business-related twists, but won’t reveal details. The private equity buyout is like a time bomb that was set early on, he says. “It comes to fruition later in the seasons.”


To contact the author of this story: Vildana Hajric in New York at [email protected]