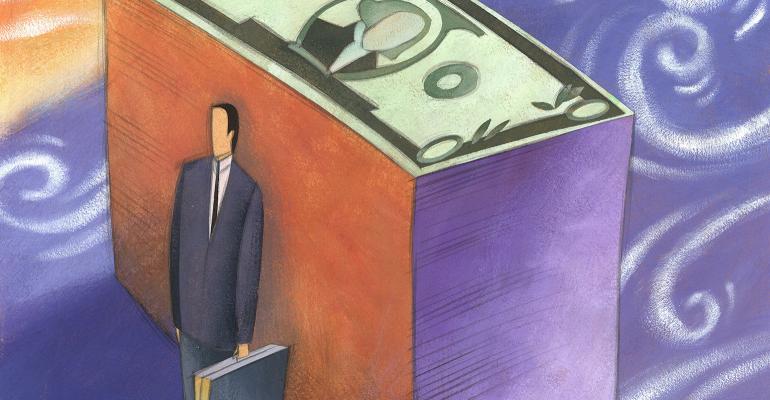 Insurance dedicated funds are gaining popularity among the wealthy.

By Sonali Basak and Tom Metcalf

Introduced in the 2000s, IDFs have become so mainstream that banks such as JPMorgan Chase & Co. and Goldman Sachs Group Inc. are offering them. Hedge funds like Paulson & Co. and Israel Englander’s Millennium Partners LP have been managing them for years.

For investors, the products provide a legal way to avoid taxes. For investment firms, the premiums are “sticky” -- they make for stable, long-term sources of capital that act as a bulwark against client redemptions at a time when clients just pulled $75.6 billion from hedge funds in the five quarters through March, according to Hedge Fund Research.

How it works: The client buys a private-placement life-insurance policy. The insurance company invests in alternative assets such as hedge funds. Profits, if any, would ordinarily be taxed as capital gains, but because it involves an insurance company, which must abide by certain restrictions, the money can grow tax-free. Beneficiaries get their money when the insured person dies. For products structured correctly, there aren’t any levies on death benefits.

Many IDFs are life-insurance policies, but they also come in the form of annuities, which have different tax implications. There’s no official accounting of how much money has been invested, but according to Aaron Hodari, who keeps tabs for Birmingham, Michigan-based Schechter Wealth, it’s at least $15 billion -- triple what it was a decade ago.

IDFs have been a discreet maneuver for years because investors “don’t want everyone to know how well it’s going,” said Richard C. Wilson, chief executive officer of the Family Office Club, a network of more than 1,500 registered family offices.

“People use these partly for estate-planning reasons but the main advantage is to let the value of these investments accumulate without any tax,” said Alex Gelinas, a tax lawyer at Sadis & Goldberg. “That will always be an appealing feature.”

The Internal Revenue Service has strict rules for the funds. Policy owners can’t try to affect, directly or indirectly, the investment decisions of the account managers. And insurance companies are prohibited from investing in certain assets.

Tax status makes a clear difference. If a 45-year-old, non-smoking man were to contribute $2.5 million to an IDF for four years, the investment would be worth $113 million within 40 years with a 6.5 percent internal rate of return, according to a presentation by wealth-planning law firm Giordani, Swanger, Ripp & Jetel. The account value would be $48.8 million if the investor paid taxes, the document shows.

Word is spreading at closed gatherings such as this month’s Private Placement Life Insurance and Variable Annuities Forum in Boston. That’s where Hodari spoke in front of some of the 250 attendees, who included employees of Goldman Sachs, Dan Loeb’s Third Point LLC, GoldenTree Asset Management, Golub Capital and York Capital. There was a similar meeting in New York in September. Third Point, GoldenTree, Golub and York all declined to comment.

Billionaire John Paulson offered an IDF in 2013 for his merger arbitrage fund, through an insurer called Philadelphia Financial.  Blackstone Group LP made a bet on the business by agreeing to buy Philadelphia Financial a year later. It’s now Lombard International. It sells Goldman Sachs and Millennium funds, according to a marketing document that says the offering is not intended for retail investors. Lombard also works with several JPMorgan hedge funds, and Morgan Stanley markets the products. Blackstone, Morgan Stanley and Lombard all declined to comment.

Blackstone has spent more than $600 million over the past few years through its Tactical Opportunities unit to acquire businesses that offer private-placement insurance.

“A handful of larger managers have long offered such products,” JPMorgan said in a white paper last year. “What is new, though, is the increase in the number of managers interested in launching IDFs and growing demand among private bank platforms seeking to partner with managers on such offerings.”

The rising use of tax-avoidance plans among the wealthy widens the gap between rich and poor, said Gabriel Zucman, an economics professor at the University of California at Berkeley.

“These forms of tax avoidance are one of the key reasons why income and wealth inequality are rising so much in the U.S.,” Zucman said. “These schemes allow very wealthy individuals to pay very little in taxes at the same time as effective tax rates paid by the working class are on the rise because of sharp increases in payroll taxes.”

The IRS has been known to pounce if it believes IDF rules about keeping investors away from the fund’s investment strategy have been broken.

In a 2015 decision, the U.S. tax court ruled that Jeffrey Webber, a venture capitalist who’d invested in variable life insurance policies, effectively retained control over the investments by using associates as conduits to direct the investment strategy of these funds. The result: a tax bill of about $400,000 on income realized by the accounts. Webber didn’t appeal and said he was happy about other aspects of the decision, including the lack of penalties imposed, according to his lawyer, Megan L. Brackney of Kostelanetz & Fink.

The level of separation can raise issues, too. Lawrence Buchalter, a hedge fund manager who invested in IDFs through Philadelphia Financial, sued the company claiming it failed in its due diligence process when it invested in a hedge fund that lost money in a fraud scheme. Buchalter’s case was dismissed due to statute of limitations.

None of that damped the interest of investors at this month’s Boston conference, according to Hodari. “The mood is great,” he said.