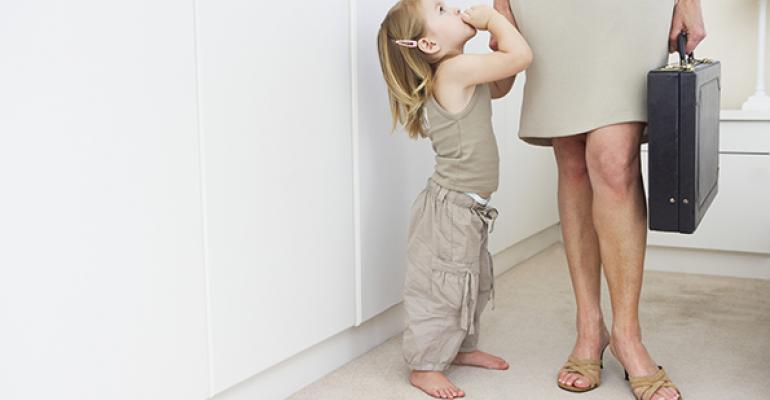 Meanwhile, men get a fatherhood bonus.

(Bloomberg) -- For women, having a kid is a bad career move, and having one as a highly skilled earner is even worse. For each child she has, a woman suffers a  "motherhood penalty" of 4 percent of income.

According to new research, published today in the American Sociological Review, for high-skilled, high-paid workers that penalty climbs to 10 percent per child.

When you're on the fast track, your wages grow quickly, so taking a break to raise kids carries a greater cost in the long run. Highflying women who take off two years to raise their kids will miss out on projects, raises, and career opportunities that will have a big financial impact down the line.

"Any amount they do drop out or go down to part-time is going to be more costly for them," said Paula England, a professor of sociology at New York University and the lead researcher on the study.

That's one reason fewer high-wage women drop out of the workforce. A Pew analysis from 2014 found that "opt-out moms"—mothers who have at least a master's degree and an annual family income of $75,000 or more, and who left the workforce to care for their families—make up just 4 percent or so of moms who stay home with their children.

And those who do stay home describe it as less of a choice than a shove. In a 2009 Center for Work-Life Policy survey of women with advanced degrees or with high-honors undergraduate degrees, 69 percent of respondents said they would not have "opted out" to care for their kids if their jobs had been more flexible.

"A lot of women are getting pushed into dropping out entirely for a few years because they can't get a little leave at the beginning or because they can't get enough flexibility," said England. In the U.S., most women don't have access to paid maternity leave. A Pew survey from last year found that working parents find it difficult to balance family and work life, with 41 percent of moms saying that parenting makes it harder for them to advance in their careers.

The researchers used data from the National Longitudinal Survey of Youth, a nationally representative survey of over 5,000 women that has tracked employment and family information throughout the adult lives of the respondents.

The motherhood penalty hurts women at the low end of the pay scale, too, and may hit them harder, since they typically have fewer resources, less disposable income, and less flex-time. But those at the highest end face the disproportionate income loss.

As for men, no problem. They get a fatherhood bonus, an increase of more than 6 percent in earnings for every child they have. To employers, being a dad signals stability and commitment.

Even in workplaces that offer flexibility, women have reported penalties for taking advantage of the options, such as loss of responsibility or longer hours than promised. For many, taking time off work or even working part-time to care for kids is the equivalent of checking out or taking a vacation. Flexible work hours will work only if that atttiude changes, Englander said. "To the extent that employers can, they should institutionalize a certain limited amount of flexibility or leave and not penalize it," she said.

Once back in the office full-time, working moms face various stereotypes. Research has found that moms get competency ratings 10 percent lower than other women. These perceptions affect earnings.

"Employers have a bias that mothers are going to do worse, so they don't promote them or pay them as much," said England. Moms are also less likely to be considered for jobs. In one study, researchers sent out resumes to employers in which the only difference between the candidates was a line about being a member of the parent-teacher association. Mothers got called back half as often as fathers.

To the contrary, studies have found that moms are more productive workers. The thought-leadership industrial complex has even called having kids a "productivity hack."

The marketplace, at least for women, doesn't reward it that way.