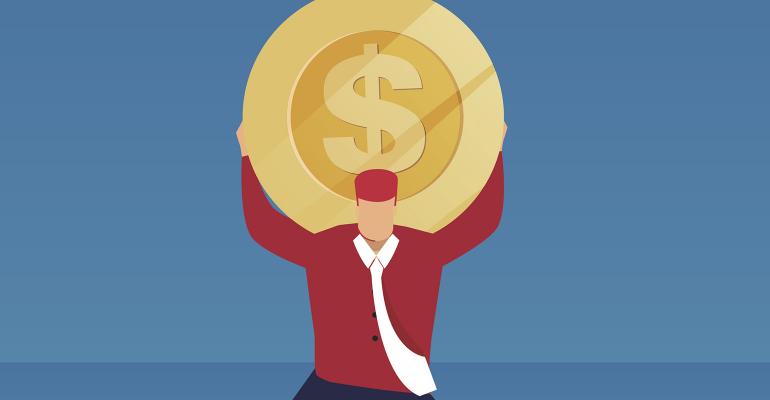 Sudden wealth can be an enormous boon to a family or an occasion for confusion and the undoing of identity and purpose. The new riches may not bring the satisfaction one might expect. In fact, it can be a family’s undoing.

Mark graduated from a prestigious business school and began a career in entrepreneurship. After building his business for 15 years, he was successful, drawing a salary of about $300,000 per year. He employed 150 talented people and paid them well. Mark was excited to go to work every morning not only because he felt good about his personal success, but also because he believed his accomplishments were useful and valuable. At this time, if Mark had been asked to graph his wealth, personal fulfillment and self-worth, the resulting chart would likely have looked like this:

His graph shows all three factors in relative balance. Mark was financially successful, and his life was meaningful and rewarding.

After a few more years of business growth, Mark received an offer to buy his company for $250 million. He saw this offer as an opportunity to secure the future for himself and his family and to realize the rewards of his business' accomplishments and success. If he continued to handle his money well, increasing his fortune through good management, he also could leave a legacy of wealth for future generations. He concentrated on the tactical aspects of wealth management but paid less attention to the strategic factors.

Within six months of selling his business, Mark was in the midst of an identity crisis. He had all the money he could ever need, but his business, which had been his chief reason to get up in the morning, was no longer his. His creativity shriveled, and he was miserable. His wealth, sense of self-worth and purpose were no longer in alignment. He wasn’t motivated. He felt guilty and anxious about the immense responsibility of managing his newfound wealth, which now took so much of his time. Mark’s reaction, which can be called “Sudden Wealth Syndrome,” is far more common than people realize, because living a rich life is about more than money.

If he’d been asked to draw his chart at this time, it would have reflected his out-of-balance life and his general unhappiness.

After months of personal reflection, Mark chose to work with several people who had insights into the ups and downs of dealing with an influx of wealth. They engaged him in a process that helped him understand his values, strengths and passions, and over time, Mark saw that a new way of living was possible. Now concentrating on both tactics and strategy, he discovered he uses his skills and drive for success to make a real difference in the lives of other talented entrepreneurs by investing in their companies and sharing his expertise with them. He could invest in major initiatives within the United States or in small companies in developing countries.

Mark found that his greatest happiness came from working in the developing world, where a relatively modest outlay could have amazing beneficial effects. He invested in schools, startup ventures and infrastructure enhancements. Cooperating with local business leaders, he preserved cultural practices while also helping to raise the standard of living for everyone in the area. His sense of purpose was reignited, and he felt fulfilled as he achieved new goals and used his talents in new and exciting ways. He took pleasure in his personal wealth and collaborated with his advisors to preserve and increase it, while at the same time using it in ways that made him happy again. His previous success was now replicated on a much wider stage, and his new life was filled with zest and excitement.

His wife and children, who observed the reawakening of Mark’s entrepreneurial genius, now have joined him in his gratifying pursuits. The children are comfortable in cultures throughout the world and look forward to continuing their father’s work after they’ve completed their educations.

“If I had to draw my chart today,” Mark says, “here’s where I see myself. Providing my health holds out, I can imagine doing this for the rest of my life.”

*This example represents a composite case like many the author has encountered in his wealth management career. The name and all identifying details have been changed to protect privacy.

Financial advisors who engage early in both the strategic and tactical aspects of sudden wealth are better positioned to help to ensure the lives of their clients will continue to be meaningful and rewarding.