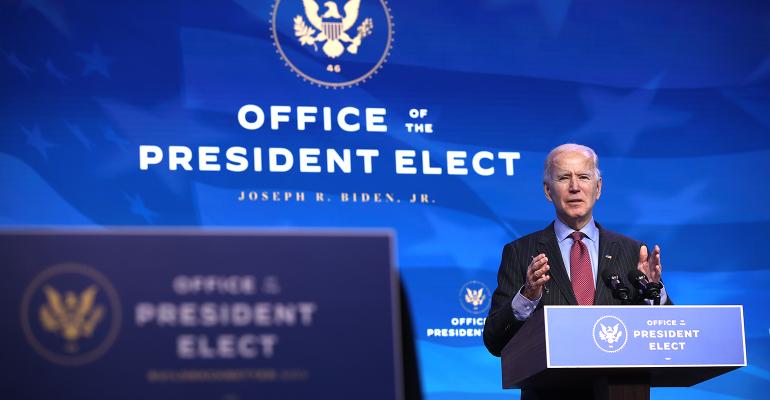 A Guide to Potential Tax Law Changes Under Biden

Now that the Democrats are in full control, here's a detailed look at the tax law changes they might propose and what advisors can do.

Now that the Democrats will control both houses of Congress and the White House, it’s time to focus on tax law changes they might propose. Although President-elect Joe Biden and other Democrats have proposed many changes to individual income and payroll taxes, business income taxes and individual transfer taxes, we’ll limit this commentary to those changes that would be most likely to affect our clients and are attributable to President-elect Biden.

Given other priorities and the realities of the legislative process, it seems unlikely that tax law changes would apply retroactively to the beginning of this year. Congress has, however, previously made even mid-year changes retroactively applicable, and it’s also possible that certain proposed changes could be enacted more quickly than others. Despite this uncertainty, we believe our clients should consider now how these proposed changes might affect them and whether they want to implement certain strategies sooner rather than later.

These may require planning or action:

Repeal of the lower rate on LTCGs for high-income taxpayers would also eliminate the benefit that rate currently provides for carried interest payments attributable to capital assets held at least three years for most taxpayers who receive such payments. Consequently, investors expecting their incomes to exceed $1 million may want to consider harvesting LTCGs or receiving carried interest payments as soon as possible in case the effective date of an increase in LTCG rates is in 2021. Commentary on this decision is included later.

Restoring the Pease limitation would reduce some itemized deductions by 3% for every dollar of taxable income above a certain threshold, possibly subject to some minimum level of allowable deductions. This change would increase the tax on charitable deductions made from income that’s described above.

Accordingly, taxpayers should consider making 2021 charitable contributions early in 2021 in case the effective date for these changes is later in 2021. For taxpayers who haven’t identified a specific cause or charity to support, a donation to a donor-advised fund is worth considering, although the adjusted gross income limitations are lower for such donations.

Many factors impact the decision whether to accelerate income subject to LTCG rates beyond the potential that it will be subject to a lower rate if it’s realized before the effective date of an increase in those rates. These additional factors include when the income would otherwise be realized, whether the acceleration will result in a lower amount of proceeds being received, whether accelerating the income will permit a change in how the after-tax proceeds are invested, and when or whether the gain is expected to be eliminated by a step-up in income tax basis realized on someone’s death.

We’ve developed a model to help our clients with this analysis. Results are highly dependent on the assumptions used, making it difficult to provide generally applicable guidance. However, our analysis of several scenarios leads us to reach the following conclusions:

Repeal of the TCJA and the resurrection of proposals made or considered during the Obama/Biden administration would significantly change the current transfer tax landscape. Although the structure and effective dates of any such changes are unknown, they have the potential to substantially constrain currently available wealth transfer strategies. Here are potential changes that we believe deserve attention.

The authors wish to thank their colleagues, Wally Head and David Salsburg, for their significant contributions to this article.

This material contains information and comments on tax and legal issues and developments of interest to our clients and friends. The foregoing is not a comprehensive treatment of the subject matter covered and is not intended to provide legal or tax advice. Readers should seek legal and tax advice before taking any action with respect to the matters discussed herein.