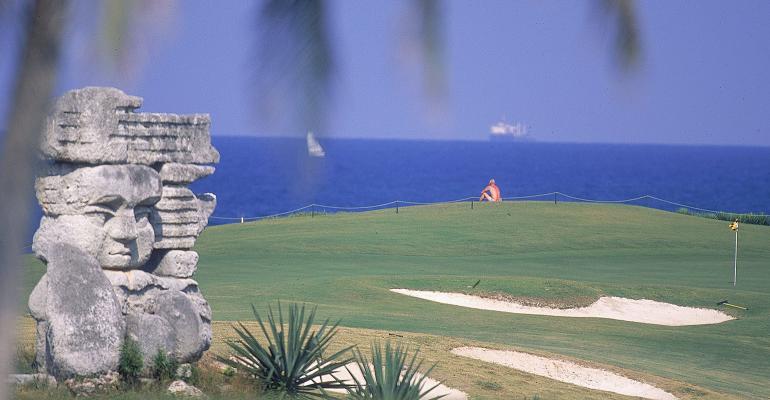 <p>The Varedero Golf Club is one of only two golf courses right now in Cuba.</p>
Wealth Planning>High Net Worth

Golf, `A Game of the Idle Rich,' Is Coming Back to Castro's Cuba

The Dominican Republic has 28 courses, Puerto Rico 20, the Bahamas 11 and Jamaica 10

(Bloomberg) -- Like most Cuban villages, Carbonera consists of run-down concrete-block buildings in blue, pink, and green arrayed along muddy, potholed roads, with a small general store. London and Regional Properties Ltd. is preparing to bet $500 million on the place.

The British developer is planning an 18-hole golf course, 1,000 villas and apartments, a 135-room hotel, a tennis academy and a marina in a place it plans to rechristen The Carbonera Club. As President Barack Obama’s visit to the island marks a new chapter in Cuban history, the company says it envisions flying in foreigners to play what Fidel Castro once derided as “a game of the idle rich and exploiters of the people.”

“Cuba doesn’t have high-end beach-front resorts like this," said Desmond Taljaard, London and Regional’s managing director of hotels, of plans for the resort on Cuba’s Florida Straits, south of Key West.

Foreign developers have proposed at least a dozen golf resorts in recent years. Beijing Enterprise Group signed a letter of intent last year to build an 18-hole course and condominiums near Havana. And Spain’s Urbas Grupo Financiero said it has lined up 30 percent of the financing for a resort with a marina and six golf courses in Cienfuegos on the southern coast.

The pioneers face a rough road. Since 2008, when the Tourism Ministry announced ambitious plans to attract foreign golfers, not a single new tee box, fairway or green has been built. The business highlights the difficulties of investing in Cuba: Laws that forbid land ownership and limit foreign participation in joint ventures to 49 percent, woeful access to supplies and equipment, and a Communist party bureaucracy that approves every decision.

In the early days of the revolution, Castro expropriated golf courses, turning some into community centers and leaving others for nature to reclaim. Today, Cuba has just two places to golf -- a nine-hole course in Havana that dates from the ’40s and is mostly used by diplomats, and an 18-holer in the beach resort of Varadero.

The game remains out of reach for the vast majority of Cubans. Green fees for 18 holes at Varadero run about $70, or roughly three times the average monthly wage in state-owned companies. Clubs cost another two months’ wages ($50) and a golf cart--required to play -- is $30 per person.

Although the Varadero course was built in the 1930s by Irenee du Pont, president of the chemicals giant, it had fallen into disrepair by the 1990s when the Cubans were developing the area as a sun, surf, and sand mecca for foreign tourists. Les Furber, the designer hired to rebuild it, recalls the Cubans he worked with as eager, ambitious, and totally clueless about the game.

“I spent a lot of time in the classroom, making them understand what the game of golf was,” Furber said.

He says the hulking Russian bulldozers were constantly breaking down, the project frequently ground to a halt while officials looked for diesel fuel or batteries, and after the Party had vetted every detail of the site, he had to modify his design when officials refused to allow the removal of 15-foot cacti in the fairways.

Some analysts say the Caribbean golf market is saturated: The Dominican Republic has 28 courses, Puerto Rico 20, the Bahamas 11 and Jamaica 10, according to consultancy KPMG.

Others say that will not stop Cuba.

“It’s my own belief that Cuba will dominate Caribbean tourism over the next 20 years,” David I. McMillan, president of Ontario-based consultancy AXIS Hospitality International, who has consulted in Cuba, said. “If the Cubans can get it right, they will be able to orchestrate a huge golf market there,” after ferry service from Florida is restored.

London and Regional’s struggles with Carbonera show that, so far, little has changed since Furber built the Varadero course. Originally controlled by a Spanish group called Esencia Hotels and Resorts, the project was slated to open in 2011. After those plans collapsed, London and Regional in 2013 bought into the joint venture with Grupo Empresarial Extrahotelero Palmares SA, which owns 51 percent of the project. Palmares, the state-owned company in charge of developing golf courses, did not respond to repeated calls for comment.

London and Regional has worked with the Cuban government to design a course that meets strict environmental standards and can survive the inevitable hurricanes that pummel the island every few years. Though the company planned to break ground in the first quarter of 2016, the site remains a grassy field dotted with palm trees abutting a coastline of black volcanic rock. The developer now hopes to break ground later this year and open by 2018.