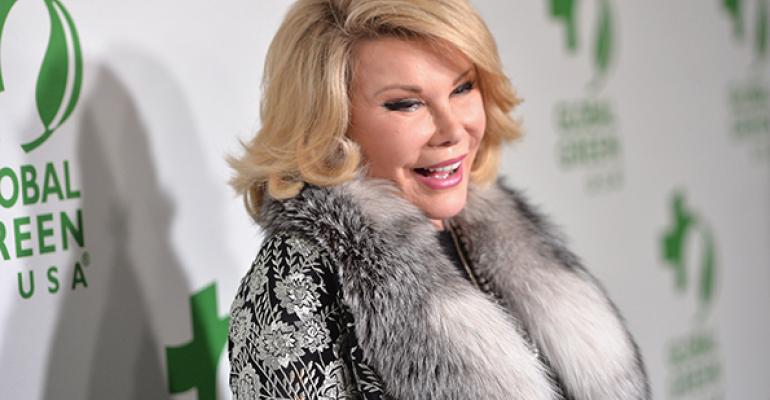 <p>Joan Rivers joked (was she really joking?) that she wanted a fabulously elaborate funeral.</p>
Wealth Planning>High Net Worth

Going Out With a Bang

Forbes recently published an article saying goodbye to Joan Rivers and highlighting her tongue in cheek (we think … with Joan Rivers you could never be sure) demands for a ludicrously elaborate funeral. Though invoking Rivers was the sizzle, the real steak of the piece is its discussion of the little-understood rules governing the deductibility of funeral expenses from a decedent’s gross estate. When engaging in estate tax planning with high-net-worth clients for whom exceeding the $5 million exemption amount is largely an inevitability, every little bit counts. Taking full advantage of the deduction for funeral expenses can be a simple way to save your clients a great deal of money.

The rules governing funeral deductions are little understood for a reason. The instructions on Form 706 read in their entirety: “Funeral expenses. Itemize funeral expenses on line A. Deduct from the expenses any amounts that were reimbursed, such as death benefits payable by the Social Security Administration or the Veterans Administration.” These guidelines are vague and unhelpful even by the IRS’s usual impossibly low standards. Luckily, some additional guidance is available in various memos and rulings. Taken as a whole, these sources imply that there are two main prongs governing the cap on funeral deductions with which advisors need to be concerned: (1) state and local law; and (2) a loosely defined reasonableness standard based on the individual circumstances of the deceased.

The second prong is where there seems to be the most potential for confusion. What’s reasonable for an enormous celebrity like Joan Rivers is obviously completely different than what’s reasonable for a lower-profile high-net-worth client. As a result, the goalposts are constantly moving, so it’s difficult to offer definitive answers, as every case will require an extremely fact-intensive analysis. The Treasury regulations offer some help at 26 CFR 20.2053-2, noting:

Such amounts for funeral expenses are allowed as deductions from a decedent's gross estate as (a) are actually expended, (b) would be properly allowable out of property subject to claims under the laws of the local jurisdiction, and (c) satisfy the requirements of paragraph (c) of § 20.2053-1. A reasonable expenditure for a tombstone, monument, or mausoleum, or for a burial lot, either for the decedent or his family, including a reasonable expenditure for its future care, may be deducted under this heading, provided such an expenditure is allowable by the local law. Included in funeral expenses is the cost of transportation of the person bringing the body to the place of burial.

Even here we continue to see references to a fairly nebulous standard of “reasonableness.” These vagaries indicate that maximizing your clients’ savings in this area is less about pushing the envelope (for example, encouraging a client to plan an overly elaborate funeral in order to create a huge deduction) and more about doing the little things to ensure that the entirety of the funeral that your client chooses is deductible, such as carefully organizing and itemizing receipts and ensuring that any planned events occur in close proximity, both distance- and time-wise, to the funeral service itself. The reasonableness standard creates unavoidable elements of uncertainty and risk. Advisors can add value by mitigating these factors as much as possible.