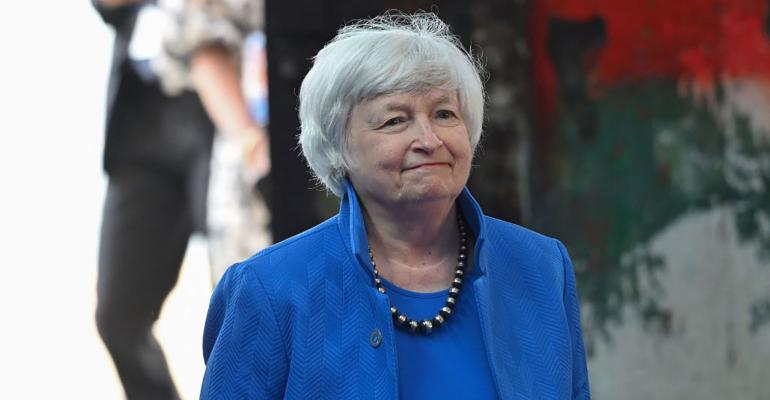 The Organization for Economic Cooperation and Development said a minimum rate could ultimately raise government incomes by $150 billion a year, while new rules would reallocate $125 billion of profits to be taxed in nations where big corporations generate revenue but may have little physical presence.

(Bloomberg) -- A vast overhaul of corporate taxation won support from 136 countries, as nations resolved key differences over the level of a global minimum rate and an end to new digital taxes that the U.S. has deemed discriminatory.

After years of missed deadlines and wrangling over how to handle global tech firms such as Facebook Inc. and Alphabet Inc.’s Google, Friday’s deal included a 15% minimum rate for corporations and the main parameters of how much profits of multinationals would be taxed in more countries: 25% of profits over a 10% margin.

The Organization for Economic Cooperation and Development, which has chaired the talks, said a minimum rate could ultimately raise government incomes by $150 billion a year, while new rules would reallocate $125 billion of profits to be taxed in nations where big corporations generate revenue but may have little physical presence. Parties to the deal include all nations in the Group of 20, European Union and OECD, the Paris-based organization announced Friday.

In addition, countries agreed not to impose new digital services taxes as of Friday, though the deal didn’t include specifics on when existing levies will be repealed.

Friday’s agreement marks a victory for global negotiations that almost ground to a halt during Donald Trump’s presidency and spiraled into trade tensions with unilateral measures and threats of retaliatory tariffs. A final deal would offer the promise of new revenues for governments facing huge debt burdens after the Covid-19 pandemic.

Today’s agreement represents a once-in-a-generation accomplishment for economic diplomacy. We’ve turned tireless negotiations into decades of increased prosperity – for both America and the world.

My statement on the OECD Inclusive Framework Announcement: pic.twitter.com/nRUbRP4BrD

“The alternative to this happening is that we see the growth of unilateral tax measures, we see the slow erosion of our global tax architecture,” Irish Finance Minister Paschal Donohoe, whose government made a crucial last-minute concession to sign up to the deal, told Bloomberg Television on Friday before the OECD announcement. “All of those things would bring additional risks, additional instability.”

The latest accord builds on a preliminary July deal, when governments agreed on key aspects of the plan for the first time -- including which companies would be subject to the profit reallocation rules.

The years-long talks at the OECD are split into two so-called pillars. The first deals with questions of allocating profits for tax, while Pillar Two seeks to create a global minimum corporate tax rate.

Of the countries involved in the talks, Kenya, Nigeria, Pakistan, and Sri Lanka haven’t signed the deal, the OECD said.

The G-20 looks to approve the plans at meetings of finance officials next week and a summit at the end of the month.

After that, the OECD must draw up draft legislation to implement minimum tax rules and a multilateral convention that would potentially affect a myriad of bilateral treaties.

The multilateral convention to implement Pillar One, the profit reallocation rules, will require countries to drop existing digital taxes and similar measures and not introduce future ones, and will define which unilateral measures are unacceptable under the agreement.

France, the first European country to introduce a levy hitting the revenues of U.S. tech giants, has already pledged to make the abolition of its tax legally binding at the moment when the new OECD rules come into effect.

“This agreement at the OECD is clearly a tax revolution which will lead to less unfairness, to more justice, to more efficiency in the way we will tax digital giants and the way we will put in place a minimum taxation,” France’s Finance Minister Bruno Le Maire said Friday.

The OECD is aiming for a multilateral convention next year and implementation in 2023. That could prove ambitious in some countries, not least the U.S.

Republicans have warned they would not back a deal that surrenders revenues to foreign governments, and a leading senator, Patrick Toomey, has said the Senate is unlikely to ratify.

Countries also agreed on exceptions from the minimum tax -- a contentious issue in the days leading up to the deal.

There will be a 5% carveout for income tied to tangible assets and payroll -- matching what was agreed in July.

Friday’s deal also built in a 10-year transition period during which the carveout will decline, starting from 8% for tangible assets and 10% for payroll.

--With assistance from Hamza Ali.