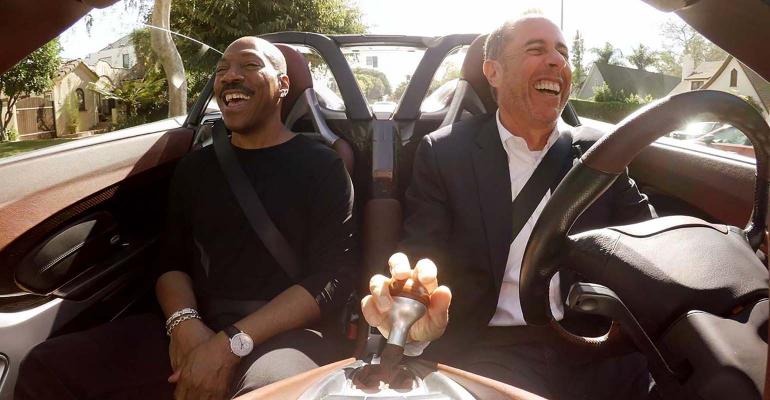 Financial Advisor Tips From Comedians in Cars Getting Coffee

Nothing is more of a meritocracy than comedy—the audience will tell you whether you’re successful instantly. So why not take some advice from the biggest name in comedy?

Jerry Seinfeld debuted Comedians in Cars Getting Coffee in 2012 because he recognized that media consumption habits were changing, and that baby boomers, Gen-Xers and millennials were spending large chunks of media time online consuming shorter bursts of on-demand entertainment on smartphone screens versus traditional TV viewing.

He was right on both counts: People did like watching video content on their phones, and the notion of watching “what you want when you want it” versus “appointment TV” changed media forever. As a result, he made a second fortune by selling the show to Netflix for $100 million.

Slowly, financial advisors are beginning to understand that shorter, online, on-demand video makes sense. It’s about time. The same fans that have migrated from watching “Must See TV” on Thursday nights to the online alternative are getting ready to retire.

When the quarantine went into place and the financial industry realized it could no longer host live workshops, it flocked to digital alternatives. Smart! But it applied live workshop marketing principles to a recorded version on a very different medium ... and the results were predictable. Think about it this way:

A) Stop whatever you’re doing two weeks from now to watch an hour-long pitch, or

B) Search and consume the information now from one of thousands of credible sources?

When it comes to the video itself, we generally saw advisors apply similar practices they used with live workshops. This meant generally 45- to 50-minute videos that did not have the production value to hold the attention of a viewer. Consider: How many hour-long features do you watch on your phone or laptop?

What Do Comedians in Cars Getting Coffee and Financial Advisor Content Have in Common?

There are three fundamental elements you need to achieve:

1) Create a concept that has value to a specific group of people.

2) Find the audience and make it easy for people to consume the content.

Just like there are many sources for entertainment, there are as many ways to get financial information. What is it about your information that is uniquely valuable and/or timely? Your “concept,” or information, should be uniquely positioned. In simple terms why “you” versus other sources of information.

This is easier than you might think. They live online, we know a lot about them, and they can be reached efficiently. Your ideas and your brand might be new to them so it could take a little time to resonate ... but if the concept makes sense, they will come to you.

Getting the Audience to Engage

Make your time count. Give them the information that they expect to get and leave them wanting for more. The “more” is to watch your next video, visit your website or call your office. Resist the urge to “sell your services” in the video itself: People are smart enough to know what you do and how you can help them. Also, you can have call-to-action elements built in to the video player.

What Has the Data Told Us?

We’ve generated hundreds of “video” campaigns for advisors, and they have ranged from short to long, and from “on-demand” to “time and date” (like workshop seminars), and the results are conclusive: Give people what they want when they want it and deliver your content swiftly ... don’t waste the viewers' time.

While our information on advisor videos was gathered from multiple advisories throughout the U.S., the true results will always be a moving target based on the ability to promote them, perform them and close leads.

The empirical truth, though, is the media habits of the high-net-worth baby boomer: They’re online, and they expect “what they want when they want it.” We believe that shorter, on-demand videos are, at the least, a supplement to the “dinner seminar” and, for some, a replacement.

Comedians in Cars Getting Coffee took vision, work and time, and as a result captured a huge audience and a tremendous financial outcome. The good news is there are many ways to get started with a similar platform in the financial world ... and those who are prepared and can execute a plan will be rewarded.