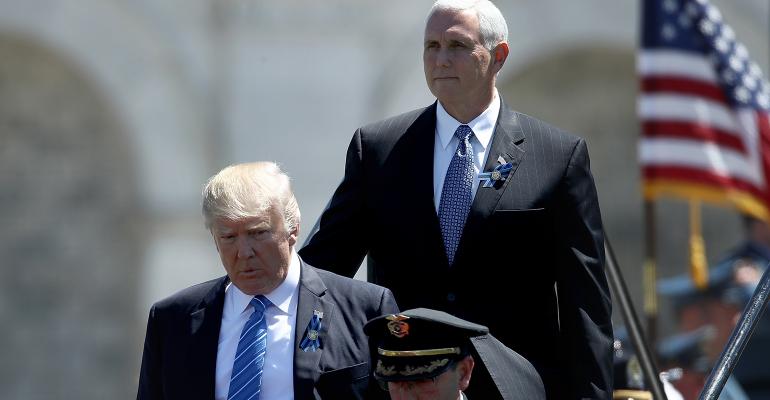 Those gathered at the SALT conference in Las Vegas are comfortable with future with Mike Pence in charge.

(Bloomberg) --As Donald Trump’s ballooning scandals sent stocks tumbling Wednesday, hedge fund managers gathered at the Bellagio in Las Vegas for one of the industry’s most popular conferences. First on the day’s agenda: pedaling exercise bikes, visiting a spa and trying a beauty service called GlamSquad. The mood was relaxed.

So why weren’t they freaking out over chatter of potential impeachment?

“We all feel comfortable with Mike Pence leading,” said Anna Stone, a marketing and investor relations consultant whose clients include family offices and hedge funds. “Some people would be happier.”

The general indifference to Trump’s travails here says much about the financial industry’s view of the young administration. For many on Wall Street, deregulation and tax reform matter more than a border wall or travel ban. Even if Trump succumbs to crisis, the thinking goes, Republicans and Pence can press on. The vice president has taken steps to begin building his own political war chest.

The scene at the conference, where a white McLaren was parked indoors for guests to ogle, contrasted with the uproar in markets, where the S&P 500 Index fell the most since September and Goldman Sachs Group Inc. shares slid the most in almost a year. On Thursday, U.S. stocks were poised to continue their descent as European and Asian equity markets slumped.

On a quiet, shaded patio at the hotel, attendees sipped coffee and networked. Down below, Bank of America Corp. and competing prime brokerages lured clients to poolside bungalows.  David Rubenstein huddled at a corner table at the Palio Cafe, where a cold-pressed juice costs $12.50. Fellow billionaire Marc Lasry took calls.

Some attendees confessed they hadn’t tuned in yet to the scandal’s latest developments, with a few saying they were more interested in finding that night’s parties. Others simply brushed off allegations that Trump asked the head of the FBI to drop an investigation into former national security adviser Michael Flynn, and reports that the president disclosed sensitive intelligence to Russian officials. Trump has denied wrongdoing. By evening, the Justice Department had named a special counsel.

Billionaire real estate investor Sam Zell said he dislikes the “cacophony” around the president, and that none of the revelations this week suggest Trump should be removed.

“I think the president has the competence, and all this unfit-for-office stuff is a bunch of stuff," Zell said in an interview from the conference.

The elite in Las Vegas weren’t alone. In Washington, Wall Street consultant Paul Atkins said things were just fine. The former member of the Securities and Exchange Commission runs Patomak Global Partners LLC and sits on Trump’s Strategic and Policy Forum. He had just come from a meeting of the board of a mutual fund company that featured Craig Phillips, a former BlackRock Inc. executive who’s leading the Treasury’s review of banking regulation. What Atkins and his colleagues care about is that the government is on its way to rolling back rules.

“You can divorce the Washington drama from the good work that the administration already is doing,” he said about deregulation. “That’s what people are focusing on.”

Wall Street has been too confident about Washington before, and it doesn’t always read government tea leaves perfectly. Early in the Republican primaries, few took Trump seriously. Even after June’s Brexit vote took bankers by surprise, not many predicted the novice politician could top Hillary Clinton. This year, the White House and Capitol Hill may be too gummed up to make the major changes bankers crave.

“None of us in the markets yet know what’s fake and what’s real,” said Bruce Richards, who runs distressed-debt investor Marathon Asset Management. Even though the burst of delight about Trump that fueled the U.S. stock market is coming to an end, he said, Mnuchin and economic adviser Gary Cohn lend steady hands. He doesn’t think those two former Goldman Sachs partners are going anywhere.

Cohn delighted executives when he talked about privatizing U.S. infrastructure at a meeting in Washington last month with members of the Partnership for New York City, an event co-chaired by Citigroup Inc. Chief Executive Officer Michael Corbat and Blackstone Group LP billionaire Stephen Schwarzman. On Wednesday, Kathryn Wylde, the partnership’s president, said her colleagues won’t abandon Trump because of the day’s crises.

“It’s the only game in town, so I think most of the financial and other leaders will stick with it until they can’t,” she said. “The focus will shift to the leadership in Congress and working with them on trying to drive these important items home.”

Ben Bernanke was on the SALT schedule alongside former Vice President Joe Biden, at least five billionaires and the comedian Steve Harvey. The former Federal Reserve chairman had a warning for his calm colleagues.

“Markets are very blase about political risk until the very last moment,” Bernanke said. “They go along until something happens that pulls the rug out from under their assumptions.”