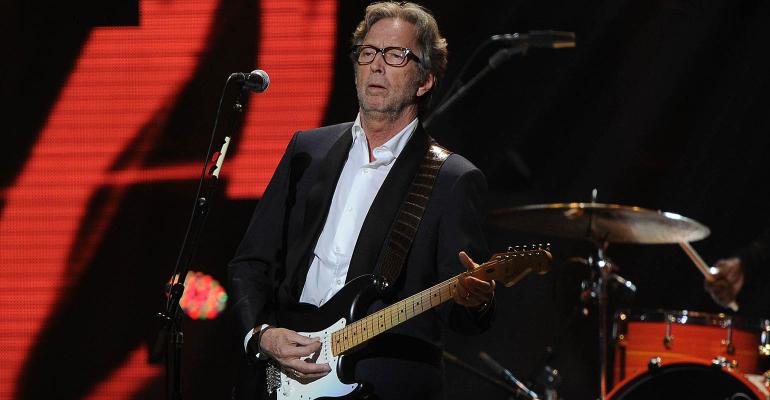 (Bloomberg) -- Eric Clapton will sell a Gerhard Richter painting valued at about $20 million in an auction that will test the market for the German artist’s work -- and show the musician’s prowess as a collector.

The canvas, titled “Abstraktes Bild 809-2," will be offered at Christie’s evening sale of postwar and contemporary art in New York on Nov. 15, the auction house said in a statement Friday. Clapton paid $3.4 million for a group of three 7-foot-tall abstract Richter paintings. He sold the two other works, in 2012 and 2013, for a combined $55.2 million. The third work could push his total above $70 million -- or more than 20 times what he paid.

“It’s an amazing return in 15 years,” Francis Outred, Christie’s chairman and head of postwar and contemporary art for Europe, Middle East, Russia and India, said in a telephone interview.

It’s been a mixed year for the market of the 84-year-old artist. While an exhibition of his new work at Marian Goodman Gallery sold out in New York, his auction sales are down 92 percent from their peak in 2012, according to Artprice. Two significant paintings by Richter were withdrawn from auctions at Christie’s and Sotheby’s earlier this year.

“When there’s a flurry of activity there’s often a pullback afterwards,” said Abigail Asher, a partner at art advisory firm Guggenheim Asher Associates Inc. “People can retreat in the moment of frothiness.”

Two other abstract works by Richter are being sold in November by Sotheby’s. Estimated at $20 million to $30 million each, they come from the estate of Steven Ames, a former partner of investment bank Oppenheimer & Co.

Richter sales were $262.8 million in 2012 and have totaled $18.4 million so far this year, according to Artprice. Last year’s tally of $178 million was in part driven by hedge fund manager Kenneth Griffin’s $46.4 million purchase of a 1986 abstract canvas, an auction record for the artist.

Clapton’s painting, which doesn’t carry a guarantee, has a smooth, glassy surface, dominated with yellow, blue and green. Christie’s will exhibit the painting in London from Oct. 1 to Oct. 6.

“It’s mystical and transporting,” said Asher. “It reads like an undulation of a pond.”