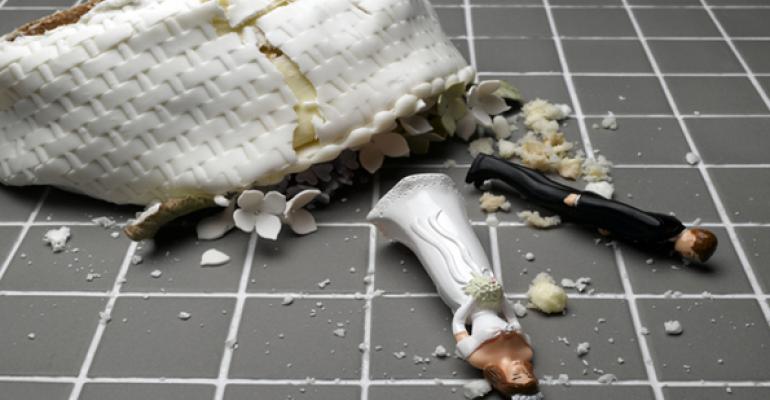 The Divorce Penalty: This 401(k) Fee Can Add Insult to Injury

For divorcing baby boomers with joint retirement accounts, the QDRO is worse than a four-letter word.

(Bloomberg) --A profit center. A silent fee. One more kick in the pants.

Those are a few of the ways divorce lawyers describe the fee that many 401(k) plan participants have to pay when they need to divide a retirement account in a divorce. As more wealth accumulates in defined-contribution plans and divorcing baby boomers move to split it up, more retirement savers are getting to know a little abbreviation that packs a big punch in frustration and exasperation.

The fee is for processing a qualified domestic relations order to transfer assets in a defined-contribution account. Some employers don't charge separately for the QDRO—the fee may be built into the plan's costs and, ultimately, spread across all your colleagues.

But when a third party such as Fidelity Investments or Vanguard Group handles the administrative and record-keeping details of a 401(k) plan, the QDRO fee charged to participants can start around $300, jump quickly to about $700, and stretch to $1,200 and beyond. That's on top of what you're paying the lawyer who prepared the form for the plan to approve and process.

One way record keepers can "enhance profit margins, while remaining competitive on record-keeping charges, is to charge bloated transaction fees to participants," said Carl Engstrom, an attorney with Nichols Kaster, which has filed excessive-fee lawsuits against plan sponsors, the companies offering the 401(k) to employees. "While QDRO processing fees may seem like an oddball or niche issue, this problem raises issues that echo many of the same themes that we keep hearing in recent 401(k) litigation."

Plan sponsors can wind up in the legal cross-hairs for allegedly breaching a fiduciary duty by not negotiating for lower fees. The litigation has focused mostly on investment fees and overall record-keeping costs, not on items like QDRO fees.

QDROs are "like a cash-printing machine for plan administrators," said Emily McBurney, an Atlanta-based lawyer who has specialized in QDROs for 16 years. Plans can essentially charge whatever they want, she said, and "no one can go up against the big record-keepers to say that the amount is not reasonable, so people are trapped."

There are tangled agendas here. Class-action lawyers may smell a potential suit alleging excessive transaction fees. Divorce lawyers say the Fidelitys of the 401(k) world are overly rigid in the language and format they require. Third-party QDRO experts, the attorneys' competitors at times, say many lawyers don't know the ins and outs of the laws surrounding tax-advantaged retirement benefits and QDROs. And when a plan administrator gets a QDRO that doesn't have the right language, it goes right back to the lawyers.

Guess who pays for their time.

A QDRO fee of $500 to $1,000 is reasonable, said Stephen McCaffrey, chairman of the legal and legislative committee for the Plan Sponsor Council of America. He cites the administrative complexities of QDROs, which fall under the Employee Retirement Income Security Act of 1974. In a 2015 survey by Aon Hewitt of 367 plan sponsors, the percentage saying participants were directly charged a QDRO transaction fee was 55 percent in 2015, up from 25 percent in 2009.

McCaffrey said divorce lawyers "rail against this because they don't have a clue about what needs to be done and the time it takes to do it. I suspect it's not a profit center for the big record keepers."

Most attorneys aren't even aware of the fee, McBurney said. "When clients are hit with an unexpected $1,000 fee from, say, Schwab, without warning—when they often already owe the attorney thousands of dollars from the divorce—they get mad," she said. If fees go up after a QDRO is rejected because the lawyer didn't handle it right, it makes the lawyer look bad—or, "more accurately, worse," she said.

Bill Burns of Lexington Pension Consultants, a longtime QDRO and pension valuation expert, said most companies he works with don't charge plan participants a QDRO fee. "It's primarily the bigger third-party administrators, and they charge more than we do in the first place," he said. "That's how they make their money."

Lexington acts as a middleman between lawyers and plan administrators. These days, more employers are signing contracts for QDROs with companies such as Fidelity, a trend that can cut into Lexington's business, said Burns.

Fidelity hasn't changed its fees in a long time—15 years. That's in contrast to many other plan investment fees and expenses, which have declined over the years amid complaints and lawsuits from consumers and lawyers.

If a participant uses Fidelity's model form and all goes smoothly, it charges $300. For orders not generated on its site and for a Fidelity-generated order that "is altered or does not contain the unique Tracking Number as originally printed on the Order," as its QDRO site puts it, it's $1,200. If an order isn't generated on Fidelity's site and involves multiple retirement accounts with the same company, it's $1,800.

Fidelity said it doesn't have data on competitive fees and has not heard "negative feedback from the consulting community" when it pitches new business that includes information on QDRO fees.

Vanguard charges around $700, and Schwab typically charges between $750 and $1,000. The 2015 Aon Hewitt found an average charge (including plans with no QDRO charge) of $398, with a median of $350.That's about what Buddy Horner, director of retirement plan consulting for Bronfman E.L. Rothschild, which works with smaller retirement plans, said his firm charges—a flat $350 and an additional hourly rate if it takes longer than two or three hours. Scott Trout, managing partner at Cordell & Cordell, which specializes in family law, said "lawyers do the heavy lifting in drafting the QDRO," something that typically costs $500 to $700 at his firm.

Fidelity is singled out the most as a source of frustration in conversations with industry players. That may simply be because it's the biggest player in the 401(k) world. Defined-contribution plans Fidelity administers cover more than 18 million participants.

"I would love to have their business model, because they refuse to speak with anybody. You can't get a human being, and there is no negotiation," said Burns, the QDRO and pension valuation expert. "It's just pay them the amount or you don't get the QDRO. If you change an and or a but, they will refuse to accept the form and you get charged $1,200."

Materially altering the form by changing a specific definition of a term such as earnings, or wanting to arrange payments from the retirement account in a way not offered on the form, would cost $1,200, said Michael Shamrell, a Fidelity spokesman. "Inconsequential or jurisdictional changes would not result in a higher fee—such as the court requiring inclusion of specific language, or minimal changes to content," he said.

Fidelity noted that 10 to 15 percent of the company's plan sponsors use it as an administrator of QDROs. It did 11,200 in 2016, and 62 percent went through its web site. At Vanguard, less than a fifth of the plans for which it does record-keeping use it for QDROs, said Vanguard spokesperson Emily Farrell in an email.

Rough industry analysis that Vanguard has seen "suggests that fees are trending slightly upward," Farrell said. Vanguard's pricing has had "some upticks over the last decade, consistent with industry trends, but they have been small."

Still, as more Americans ask, What's a QDRO? and What's this QDRO thing you're billing me for? and Why am I paying $1,800 for a blanking QDRO?, it is becoming an unwelcome part of our financial vocabulary.