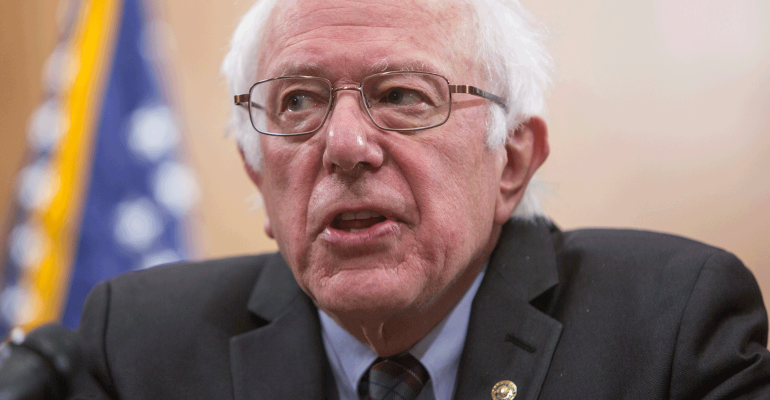 An expansion of the AMT would require some top earners to pay more in taxes even if they are eligible for a long list of credits and deductions.

(Bloomberg) -- Democrats are looking at expanding the minimum income tax rates that some high earners will have to pay, a move that would help offset their benefits from a proposed expansion of the federal deduction of state and local taxes, according to a person familiar with the negotiations.

An expansion of the alternative minimum tax, or AMT, would require some top earners to pay more in taxes even if they are eligible for a long list of credits and deductions, the person said. The idea of widening the AMT’s scope comes as House Democrats are coalescing around a proposal to make the SALT deduction unlimited for five years -- a big break for some of the richest Americans, even given some of the tax increases elsewhere in President Joe Biden’s economic agenda.

The Washington Post earlier reported Democrats’ interest in the AMT to help balance an expansion or repeal of the $10,000 SALT deduction cap.

The AMT is a tax determination that’s parallel to the standard tax system, and requires some higher-income Americans to calculate their federal levies twice. Taxpayers pay the AMT -- either 26% or 28% -- if they have too many tax credits and deductions as determined by the formula. The top marginal income rate in the standard tax system is 37%.

SALT deductions are disallowed under the AMT calculation, while other tax benefits, such as the mortgage interest deductions and medical expense write-offs, are capped.

The interest in a minimum levy on high earners comes as Democrats face criticism that their plans to suspend the SALT deduction would advantage some of the richest Americans.

Senator Bernie Sanders, a Vermont independent who caucuses with Democrats, said Tuesday he can’t support a proposal to make the SALT deduction unlimited through 2025, because it would give too many tax breaks to billionaires. Slim majorities in the Senate mean that any one member could block the tax and spending bill that Democrats are now hashing out.

Sanders said he could support unlimited SALT deductions only for those earning under $400,000 a year.

The AMT was greatly scaled back in the 2017 Republican tax law, resulting in about 200,000 taxpayers being subjected to AMT in 2018, compared with 5.1 million before the law passed, according to the Urban-Brookings Tax Policy Center. That law also capped SALT deductions at $10,000, which meant that fewer taxpayers were subject to the AMT, because they were eligible for fewer tax breaks.

An expansion of the AMT coupled with an uncapped SALT deduction could mean that millions of taxpayers end paying AMT and therefore lose out on SALT deductions.

In fact, many upper middle-class taxpayers who were upset at the $10,000 limitation on SALT imposed in the 2017 law were never even claiming that deduction, thanks to AMT rules, according to Bloomberg News analysis.

Biden’s framework for the bill includes a 15% minimum corporate tax on financial statement profits as well as a 15% minimum levy for companies’ earnings abroad. Senator Joe Manchin, a West Virginia Democrat, has also floated his own version of an AMT that he’s calling a “patriotic tax.” That would apply a 15% rate on wealthy individuals who can claim lots of tax breaks.