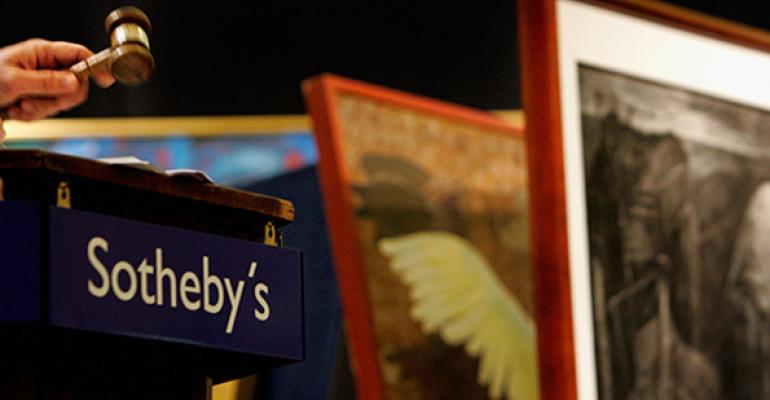 Deal of the Art: Why Auction Houses Are Giving Away Millions

A sense of relief rippled through Sotheby’s elegant Manhattan headquarters as “Untitled (New York City),” a celebrated painting by Cy Twombly, ultimately set an auction record for the artist.

For behind the heady gavel price was a hard business reality: even as the crowd sipped champagne that evening, Sotheby’s was still frantically wooing a buyer. In the end, the grand old auction house had to pay for the privilege of selling the masterpiece.

That’s pretty much how it goes in the auction business these days. Like many works of art, the 1968 “Untitled” was sold under what is politely known as the “enhanced hammer,” behind-the-scenes deals that are shifting the balance of power inside the notoriously opaque market for art.

Sotheby’s, like its chief rival, Christie’s, typically collects fees from buyers and sellers. While the houses have often waived seller commissions for showpieces, cut-throat competition has forced them to sweeten deals even more to lure hedge fund types and other deep-pocketed collectors.

When Sotheby’s auctioned off “Untitled” last November, it handed the seller, Los Angeles art patron Audrey Irmas, most of its $7.8 million buyer fee on top of the hammer price, according to people familiar with the matter. It also cut a risky deal with the buyer, hedge fund manager Daniel Sundheim.

The financial gymnastics say a lot about faded fortunes of the world’s two big auction houses. A decade and a half after the world learned the pair had colluded to rig seller commissions, the auction-house equivalent of a price war has broken out. The battle has grown so fierce that the houses are offering a range of incentives to win consignments, often at the expense of their own profits.

“They have been making absolutely absurd deals just to be seen selling this Koons or that Rothko,” said David Nash, co-owner of Mitchell-Innes & Nash, a gallery in New York, and a former Sotheby’s executive. “They’d do anything to get the deal away from the competition.”

Few in the auction trade will talk openly about specifics, but many agree these arrangements have become ubiquitous. Sotheby’s declined to comment on the Nov. 11 sale, as did Irmas and Sundheim.

In the Moet-and-beluga auction trade, the sweet deals for sellers are telegraphed in code. A 105, for instance, means the seller gets to pocket an extra 5 percent on top of the hammer price. A 109 means a 9 percent premium, and so on.

Few would have sensed the financial pressure as collectors filed into Sotheby’s Upper East Side galleries to glimpse “Untitled” last November. Until then, the abstract painting had rarely been seen in public -- and Sotheby’s, Saveur magazine would later recount, was making the most of the moment.

High on the 10th floor, Massimo Bottura, the celebrated Italian chef, carved a giant wheel of Parmesan, a prelude to a multi-course feast set amid the high-priced works up for sale. “Honey, I want that Longo for the living room,” one woman told her husband. Nearby, the photographer Cindy Sherman, in a pink skirt and gold platform sneakers, admired two of her own works.

Behind all that splendor, the squeeze was on. Since 2009, art prices have soared and sales have more than doubled. But Sotheby’s commission margins, the revenue from commissions as a percentage of auction sales, have dwindled to about 14 percent from 21 percent. After a roller-coaster ride in recent years, Sotheby’s share price has fallen 36 percent over the past 12 months, closing at $27.57 on Monday.

Christie’s, which as a closely held company isn’t required to report financial results, has been wielding the enhanced hammer too, as has Phillips, which specializes in emerging artists. Last May, Christie’s handed much of its $15.3 million in fees to the real estate developer Sheldon Solow when it auctioned off one of his pieces, a sculpture by Alberto Giacometti, for a $126 million hammer price, according to a person familiar with the matter. Representatives for Christie’s and Phillips declined to comment, and Solow didn’t return telephone calls.

The enhanced hammer is only one tool auction houses are using to lure big collectors. Other deals, from various financial guarantees to art swaps, are also being cut.

The stakes were high for Sotheby’s going into the Nov. 11 sale. Only days earlier, the house had disclosed it wouldn’t earn any commissions at all from selling the collection of the late A. Alfred Taubman, its former chairman, until the house covered a $515 million guarantee that it gave the Taubman estate to win the consignment. (Taubman, who died last year, had been imprisoned for 10 months following the price-fixing scandal of the early 2000s.) The news was weighing on Sotheby’s share price.

The star of the evening, Twombly’s “Untitled,” was vulnerable because it didn’t have a bidder lined up.

So Sotheby’s cut a deal with Sundheim, the chief investment officer of Viking Global Investors and a trustee of the Museum of Modern Art. According to people familiar with the deal and a financial filing with New York State, the house let the collector largely pay for the Twombly with a pledge to consign seven other works with a combined estimated value of $50 million to $75 million. Sandy Heller, a prominent art adviser, was still negotiating for Sundheim as the auction began.

Sotheby’s guaranteed Sundheim minimum prices for the art -- a move that leaves the house on the hook if prices fall short. Four of Sundheim’s pieces, among them a Warhol and a Basquiat, are going up for auction in May.

Executives have been willing to give up commissions and assume such risks to generate buzz and hopefully higher prices for entire auctions.

“They view it not as an economics of that lot but rather how that lot will contribute to the economics of the entire sale,” said Evan Beard, national art executive at U.S. Trust. Both Sotheby’s and Christie’s want to dial back the deal-making to put a floor under commission margins. A new management team at Sotheby’s, led by Tad Smith, seems less willing to trade profits for market share. In February, he told analysts the deal-making remains “fairly significant” for collections that are highly competitive but he’s seeing signs of fewer givebacks on single consignments.

The same goes for Christie’s. “We are trying to re-calibrate the market and persuade the sellers to come to a more realistic point of view,” said Brett Gorvy, global head of postwar and contemporary art at the London-based house. “We believe that if we work very hard and create value for the consignor, we should be paid for it.”

The question is whether collectors will be willing to forgo deals that have been so lucrative for them.

Thomas C. Danzinger, a New York lawyer who negotiates auction sales for major dealers, advisers and collectors, agrees the auction houses want their old commissions back. But art is a brutal business, and many are now worried the market is starting to cool. Letting go of the enhanced hammer may not be so easy.

“We’d ask for enhanced hammer for anything,” Danziger says. “That’s the most powerful tool the auction houses have to attract consignors.”