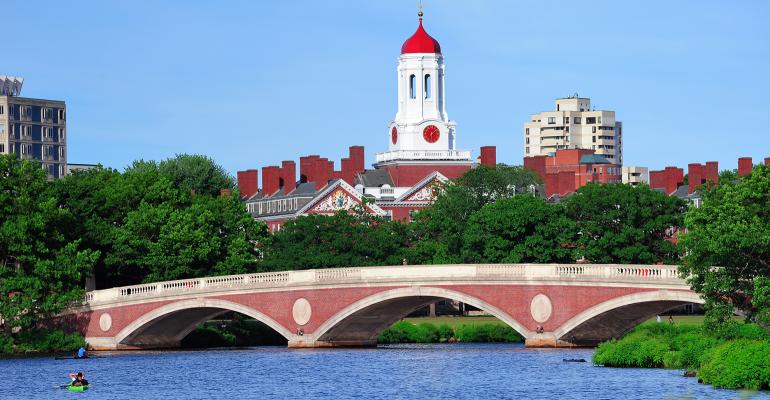 The Day Harvard Stopped Being a Hedge Fund

Six lessons to be learned from Harvard's endowment.

(Bloomberg View) --After losing $2 billion last year while markets mostly moved higher, Harvard Management Co. announced big changes in the way it oversees the world’s largest university endowment. Kicking off the new era, it is getting rid of half of its 230 employees and farming out management of most of its money. Alumni and other interested observers should expect to see a much simpler and cheaper endowment in the near future.

Today’s missive will explore what this change foretells, but first, a brief reminder of HMC's recent history. Under the direction of Jack Meyer, president of endowment manager from 1990 to 2005, returns were stellar. Then Harvard President Lawrence Summers get involved, ignoring warnings from Meyer that the university was “mismanaging its basic operating funds” and investing too much in risky stocks, bonds and alternative investments.

In what can be best described as an example of hubris and political correctness run amok, Meyers and his team were forced out. As my colleague Ben Carlson observed, “Things have been slowly going downhill ever since.”

Since 2005, the fall from grace has been stunning. There are a few lessons here worth noting:

No. 1. When a money manager is outperforming the benchmarks, leave them alone: Under Meyer, HMC had captured lightning in a bottle. Messing with that rare and delicate thing is simply foolish. Harvard had to learn that the hard way.

No. 2. Simpler and cheaper beats complicated and expensive: Investing luminaries such as Charles Ellis, Jack Bogle and Burton Malkiel have long argued that the simpler and cheaper a portfolio is, the better its long-term performance. This is true even for a $37 billion endowment like Harvard’s.

No. 3. Opining about things you know nothing about is an expensive self-indulgence: The second-guessing of outsiders who thought they knew better is a perfect example of this. The Harvard professors and alums who deemed themselves more insightful about the mysteries of investing than the professionals is just the sort of hubris that the trading gods love to punish. This 2004 New York Times article about how much higher Jack Meyer’s pay was than that of Yale Chief Investment Officer David Swensen sums up the critics' complaints -- and naivete. What the critics accomplished was saving millions of dollars in management compensation while forsaking billions of dollars in returns. That was a dumb trade.

No. 4. Costly, underperforming alternative investments are on notice: This is part of a broader trend that was first thrust into view in 2014, when the giant California Public Employees Retirement System (CalPERS) pension fund said it was dumping its hedge fund investments, and reducing other so-called alternative investments. But pension funds and endowments move slowly; Harvard has had six different endowment managers before reaching the same conclusion as CalPERS. Other pension funds and endowments are likely to find religion as well. (Are you listening, New York?) It's inevitable that pensions and endowments will also cool on venture capital and private equity.

No. 5. Don't be a copycat: The long rivalry between Harvard and Yale should be confined to their respective football and debating teams. It shouldn't be between their endowments. Harvard’s endowment shouldn't follow the so-called Yale Model, nor should it attempt to re-create Jack Meyer’s model. Each new team needs to find its own path. It looks like the university’s new endowment chief, N.P. Narvekar, who formerly ran Columbia University’s endowment, understands that. He has much more in common with CalPERS than he does with Yale.

No. 6. Understand your time horizon: Harvard was established in 1636. Unlike us mortals, its time horizon is infinite. In contrast to someone approaching retirement, there is no need to hedge returns. Hence, a long-term, low-cost, simple approach to managing assets is uniquely capable of achieving this the desired goals.

There is an old joke that describes Harvard as a $37 billion hedge fund with a university attached. As of today, you may officially retire that quip.