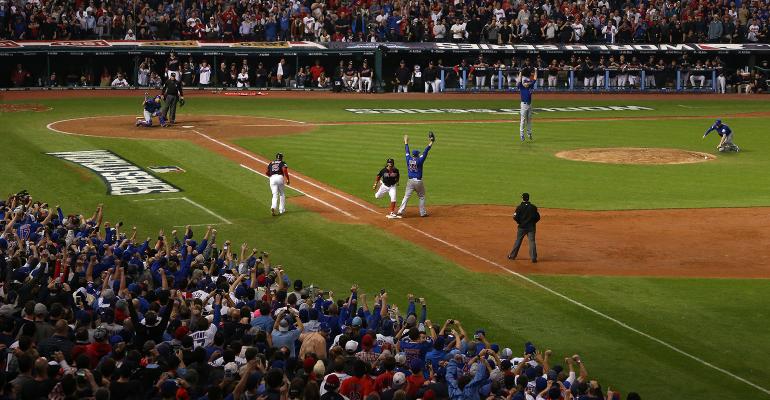 Cubs Final-Out Baseball May Fetch $3 Million If Ever Sold

How do you put a price on 108 years of history?

(Bloomberg) --Chicago Cubs first baseman Anthony Rizzo had just recorded the final out of the World Series, ending the longest championship drought in major U.S. professional sports. Before high-fiving any teammates, however, Rizzo took care of business: He reached back with his left hand and placed the baseball in his back pocket for safekeeping.

The ball’s value goes far beyond sentiment. It might fetch more than $3 million if sold, said Ken Goldin, founder of Goldin Auctions in New Jersey. He set a price floor of about $1 million.

“It would be one of the most coveted baseballs of modern times,” he said.

The ball’s value would be driven by two things, Goldin said: The team’s 108-year championship drought and the number of wealthy Cubs fans who would be willing to fork over whatever it takes to own it.

Goldin said he doubted the baseball would ever be sold.

Cubs spokesman Peter Chase didn’t respond to a question asking whether the team was in possession of the last-out baseball, which MLB officials authenticated after the game and returned to Rizzo.

Historically, for big events like the World Series, ownership of items like game-used balls belongs to Major League Baseball, which then decides what to do with each particular item. Teams and charities often ask for items.