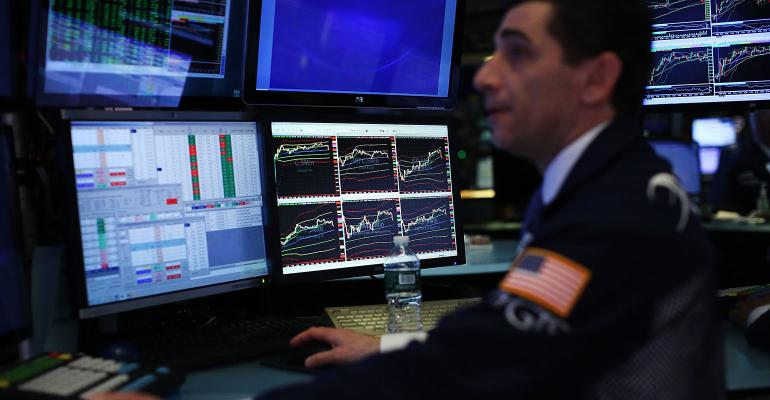 Political risk is keeping many wealthy on the sidelines.

By Jan-Henrik Förster and Jeffrey Vögeli

(Bloomberg) --Credit Suisse Group AG and UBS Group AG have a message for their wealthy clients: it’s not too late to buy equities.

Political risk is keeping many rich individuals on the sidelines of a rally that’s sent global stocks surging to records amid a recovering world economy. Now’s the time for them to jump back in and take advantage of the gains still to be made, say the people looking after their cash.

“Whenever it feels really difficult and challenging to put money at work, ultimately those are often the better investments,” Burkhard Varnholt, deputy chief investment officer of Credit Suisse, said at a roundtable discussion at Bloomberg’s Zurich office on Feb. 27. “That sense of skepticism, that wall of worry, which is still there, to me is not a discouragement.”

There are signs that fears of political upheaval are not just overblown but misplaced. Far from tumbling on Donald Trump’s Nov. 8 election win, the S&P 500 index went on to have its biggest weekly gain in two years. U.K. stocks fell after the June Brexit vote, but then started rallying -- partly because the weaker pound boosted exporters’ profits.

Attention now turns to the politics of Europe. From the rise of far-right French presidential candidate Marine Le Pen to Britain’s likely triggering of divorce proceedings from the European Union this month, there are plenty of potential flashpoints.

The question wealth-management clients have to ask is whether the risks are sufficiently perilous to warrant staying out of stocks when the return of inflation and Wednesday’s Federal Reserve interest-rate increase signal a recovery. The defeat in this week’s Dutch elections of anti-immigration candidate Geert Wilders is already being seen as a blow to the spread of political populism.

“We can get very fuzzed about political risks these days because it occupies the headlines,” Urban Angehrn, CIO at Zurich Insurance Group AG, Switzerland’s biggest insurer, said at the Bloomberg event. “Underneath that, we have a pretty benign macro environment that shows a recovery, good consumer and business confidence. There are a lot of other positive economic trends.”

Rich individuals who have kept out of stocks have missed out, though, and doubts are emerging as to how much upside is left. Goldman Sachs Group Inc. strategists cut their three-month outlook for the asset class to neutral this week, while Allianz Global Investors equities CIO Lucy MacDonald told Bloomberg TV on Tuesday that valuations are becoming stretched.

“The pro-equity versus bonds debate, it’s not as clearly in favor of equities as it was,” MacDonald said. “There will be better buying opportunities” in stocks than there are now.

Even so, Mark Haefele, CIO of UBS’s wealth-management unit, spent time traveling the world this year, trying to persuade clients to shift out of cash and bonds and into stocks to boost their returns.

Global equities have made 11 percent in the past six months, including re-invested dividends, while government bonds in Europe and Japan are only now starting to see their yields climb above zero percent, data compiled by Bloomberg show.

While many clients are engaged in a “hunt for yield,” UBS’s customer base overall “would benefit from moving out of bonds and cash” into stocks and higher-yielding alternatives such as hedge funds, said Haefele, who oversees $2.3 trillion.

“Political uncertainty is always difficult to price,” said Guido Fuerer, CIO of Swiss Re, who oversees assets of about $160 billion. “Going beyond politics and thinking about policy uncertainty more broadly, I see the Fed’s normalization path as very positive, not only for market stability but also for us as long-term investors.”