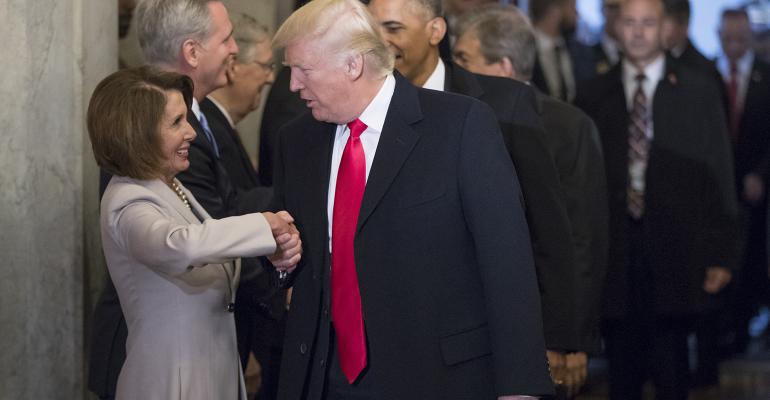 As lawmakers continue negotiating a deal to reopen parts of the government where funding expired in December, tax wonks in Washington are looking ahead to what we might expect on Democrats’ tax agenda early this year. From our perspective, there are two big priorities dominating the agenda: revisiting the 2017 Tax Cuts and Jobs Act and nosing around President Trump’s tax returns.

As already outlined by Ways and Means Committee Chairman Richard Neal (D-Mass.), priority No. 1 for House Democratic tax writers and their new position in the majority is to revisit—and reimagine—parts of the 2017 tax bill they don’t like.

As you may recall, Democrats weren’t part of the tax reform process last year (the why depends on who you ask). So now that their brand of politics and policy is powering the House of Representatives, it’s their turn to make a mark. But the landscape is very different from what it was almost a decade ago when they were in power. This different landscape will make for more-challenging governing, particularly on tax issues.

As they revisit the 2017 tax bill, one fundamental issue Democrats will want to address is who should be paying more taxes and who should be paying less. The distribution of the tax burden will be front and center next year. The new majority is talking about what amounts to a Robin Hood approach to redistributing that burden. In practice, this likely means increasing taxes on upper-income earners while lowering taxes on those toward the bottom. But consider that almost half of Americans don’t pay federal income taxes (again, the why depends on who you ask), so what would that distribution look like?  From higher-income earners (and corporations because they don’t vote) to less-higher-income earners?

Another fine line Democrats will have to walk is on a much-maligned new law that puts a $10,000 cap on state and local tax (SALT) deductions. The new majority in the House will have to tread gently on this one. That’s because more than half of the benefit of repealing that cap—and going back to the good old days—would go to millionaires and billionaires, and a full 93 percent of the benefit would go to households earning more than $200,000, according to the Urban-Brookings Tax Policy Center. Not exactly giving to the poor. Or even to most people’s definition of the middle-class. How do they square this priority with their Robin Hood approach?

And then there’s the cost. Without a tax increase on somebody, repealing the SALT cap would add more than $600 billion to the deficit over the next 10 years, according to the Tax Policy Center. Who’s that somebody?

Our best guess is probably corporations. They don’t vote, and they made out fairly well in the 2017 tax bill, so that makes them a solid target. But really this debate is just that. Unless Democrats can get 60 votes in the Senate to prevent a filibuster by Republicans, this is just talk.

Those glitches in the tax bill won’t fix themselves. Perhaps there’s a deal to be made in which House Democrats get some relief from the SALT cap for their coastal constituents and Senate Republicans get those glitches taken care of. Stay tuned.

The Elephant in the Room

Then there’s the other No. 1 priority: getting access to President Trump’s tax returns. A lot of Democrats ran on this in the 2018 election, and even before the election was called in their favor, House Democratic leadership began their research into how to legally obtain Trump’s tax returns. Speaker Nancy Pelosi (D-Calif.) told the San Francisco Chronicle editorial board that it’s “one of the first things we’d do—that’s the easiest thing in the world. That’s nothing.”

She’s right, the process appears to be easy. Under the so-called committee access provision of 1924, the chairman of a tax-writing committee—in this case, Chairman Neal—sends a letter to Treasury Secretary Steven Mnuchin requesting the president’s tax returns. Secretary Mnuchin can then order the Internal Revenue Service to send Trump’s tax returns over to Congress. At that point, all 30+ members of the Ways and Means Committee can review the returns. And although the returns can’t be made public, leaks happen, and then all or parts will be out there for all of us to see. But, another plausible scenario is Trump intervenes and fights the request with his lawyers. Your guess is as good as ours.

Here’s something else to think about. Just because Democrats can doesn’t mean they should. Demanding Trump’s tax returns could be a risky bet with big political stakes and possibly no clear winner. If they don’t find anything, Trump would surely rile up his base with an “if they can get my returns, they can get yours” message. If they do find something, it’s not likely to be “clear as day.” Tax return nuances never are.  And the Democrats could be left with a political loss in the lead-up to the 2020 presidential election.

Even though it's been just days since Pelosi officially took her spot as leader of the Democrats, she and President Trump already have been at odds for weeks. A contentious meeting in December among Trump, Pelosi and Senate Minority Leader Chuck Schumer (D-N.Y.) showed both Trump and Pelosi are ready to fight. The smart money is on counting neither of them out. Stay tuned.