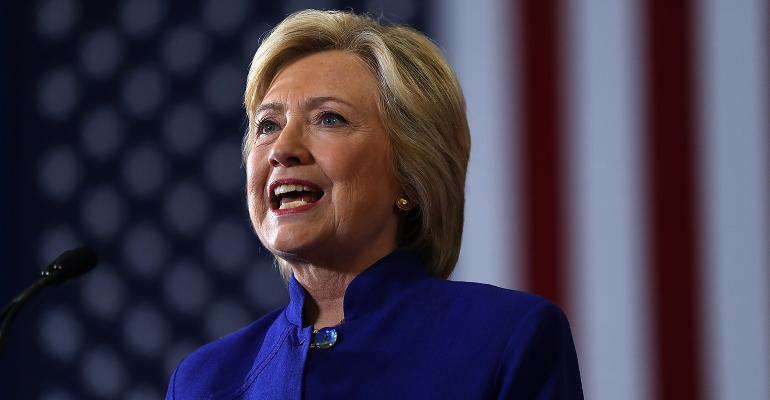 (Bloomberg) -- Hillary Clinton wants roughly $550 billion in new taxes and fees over the next decade -- affecting investment partnerships, large estates and banks -- that have received little to no public discussion from her campaign, a report from a Washington-based policy group shows.

The new proposals, detailed in a report by the nonpartisan Committee for a Responsible Federal Budget, include plans for increasing the estate tax to a top rate of 65 percent on the very largest estates, levying a “risk fee” that would average about 0.13 percent on banks’ taxable assets and curbing a technique real-estate investors use to minimize their tax bills.

“Some of these tax changes were added to her plan just this week,” according to the report, which is based on information provided by the Clinton campaign. A senior aide to the Democratic presidential nominee’s campaign said the online version of Clinton’s plan will be updated to include the new details Thursday.

“We appreciate the opportunity that this report and other independent analyses provide to give further details on how Secretary Clinton plans to raise revenue from the wealthiest taxpayers to pay for key investments in the middle class, as she’s made clear she will do throughout this campaign,” said Julie Wood, a Clinton campaign spokeswoman.

Clinton is also proposing about $250 billion in tax cuts for taxpayers with children, for childcare expenses and for small businesses -- and some $140 billion in new health-care and education spending, the report said. Considering all of those provisions, the latest iteration of her revenue-and-spending plan would increase the national debt by $200 billion over 10 years -- a figure that’s about $50 billion less than the budget-policy group estimated for an earlier version of her plan.

“These revenue increases have not been published on the campaign’s website but have been shared with the Committee for a Responsible Federal Budget,” the report said.

By comparison, Trump -- who recently revised his plan to offer tax cuts for individuals and corporations -- would increase the debt by roughly $5.3 trillion over 10 years, the group’s report said. That figure is less than half the $11.5 trillion that the group estimated for his original plan.

Over the past week, both campaigns have given details about their tax plans to Washington-based policy analysts that differed from what they’ve made public. On Sept. 15, a Trump campaign adviser told the Tax Foundation that a key provision of Trump’s plan -- a 15 percent tax rate for certain types of businesses -- would apply only to corporations. But at the same time, the New York Times reported, Trump’s campaign told a small-business advocacy group that the rate would be available to small businesses.

The information that Clinton has shared with the Committee for a Responsible Federal Budget is somewhat different. For example, one proposal -- to levy an existing 3.8 percent “net investment income tax” on income from partnerships, limited liability companies and other businesses known as “pass-throughs” -- has been publicly available, though little-noticed. It borrows from a proposal by President Barack Obama’s administration.

“They shared it with us a month ago,” said Marc Goldwein, the Committee for a Responsible Federal Budget’s senior policy director, referring to Clinton’s campaign. “It’s not something they’re advertising.”

Pass-through businesses don’t pay taxes themselves, but pass their earnings through to their owners, who are taxed at their individual tax rates. The pass-through structure is used extensively by small businesses, investment partnerships and giant money managers like Fidelity Investments, or FMR LLC. Under current law, such businesses have been able to escape the investment-income tax, which was created by the Affordable Care Act. Ending that would generate about $250 billion in revenue over 10 years, the committee estimates.

Another Clinton proposal -- a risk fee for banks -- was first proposed several months ago, though she provided little detail, the policy group said. It turns out the fee would be almost double what analysts expected, the report said. Analysts assumed her proposal would be similar to one from Obama, who had proposed a fee of seven basis points on the assets of large financial institutions. (A basis point is the equivalent of 0.01 percentage point.)

Instead, Clinton’s fee will use a sliding scale, based on size and risk, that averages about 13 basis points -- almost twice as large as Obama’s proposal, the report said. As a result, the fee is estimated to raise about $50 billion more over 10 years.

Clinton also plans to borrow an idea from her former rival for the Democratic nomination, Senator Bernie Sanders, and create a graduated set of rates for the estate tax, topping out at 65 percent. Under current law, a 40 percent tax rate applies only to estates worth more than $5.45 million. Clinton had already proposed to increase the rate to 45 percent and lower the threshold to $3.5 million.

Clinton will also propose limiting the tax benefits of so-called “like-kind exchanges,” which will affect investors in real estate, art and other properties. Currently, such investors can defer paying capital gains taxes when they sell such assets if they simultaneously reinvest the proceeds in similar property. Clinton’s proposal would raise $50 billion over a decade, the committee estimates.

When it comes to spending, Clinton’s published proposal for “debt-free college” for students from lower- and middle-income families who attend four-year institutions and for free community college would now cost $500 billion -- a $150 billion increase from prior estimates, the committee said. That’s because the campaign now wants to also provide free tuition to students at in-state public universities if their families make less than $125,000 a year, the report said.

Clinton also wants to allow individuals to become eligible to “buy in” to Medicare -- government health insurance for those over age 65 -- earlier, at age 55. She had mentioned that general option in a speech in Virginia in May, but had not specified the age. Her published plan also calls for spending $40 billion on community health centers over a decade. Combined, the two health proposals would cost $100 billion over a decade, the committee found.

Because both their plans are estimated to generate red ink, the committee’s report gave high marks to neither Trump nor Clinton for responsible budgeting. “The next president will enter office with the national debt at post-World War II record high levels,” the report said. It noted that debt held by the public currently totals $14 trillion -- almost 77 percent of U.S. gross domestic product. It’s projected to grow as a share of the economy to roughly 86 percent by 2026 and about 150 percent by 2050.

“This large and growing national debt threatens to slow economic growth and is ultimately unsustainable,” the report said. “Yet neither presidential candidate has a plan to address it.”