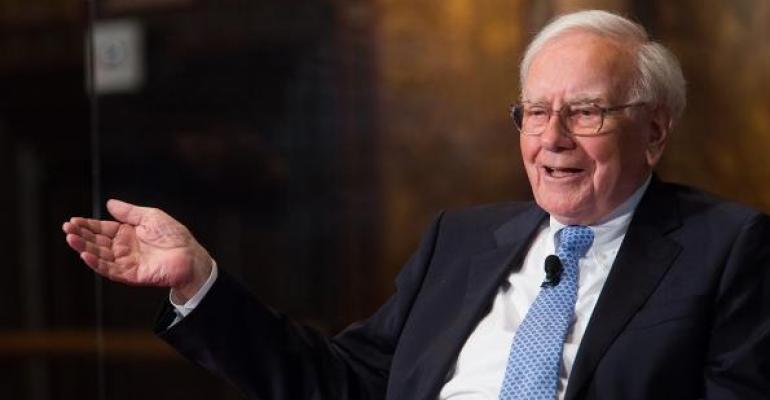 In a debate Sunday, Trump acknowledged using a nine-figure loss in 1995 to reduce tax obligations and sought to liken the move to strategies used by some of Democratic presidential nominee Hillary Clinton’s wealthy supporters, including Buffett. On Monday, the billionaire Berkshire Hathaway Inc. chairman released information from his personal taxes and challenged the Republican presidential candidate to do the same.

“He has not seen my income tax returns. But I am happy to give him the facts,” Buffett said in a statement. “I have paid federal income tax every year since 1944, when I was 13.”

Buffett has been clashing for months with Trump, who has refused to release his tax returns, citing an audit. At a campaign event for Clinton in Omaha, Nebraska, in August, the Berkshire chairman challenged the Republican candidate to meet him “any place, any time” to swap returns and answer questions from the public.

That never came to pass. On Monday, Buffett said he paid $1.85 million in federal income taxes in 2015 on adjusted gross income of $11.6 million. That would mean he paid an effective federal income tax rate of about 16 percent. In 2013, the most recent year for which data are available, the top 1 percent of earners paid 27 percent, according to an analysis of Internal Revenue Service data by the Tax Foundation.

Most of Buffett’s $65 billion fortune comes from his controlling interest in Berkshire. The company doesn’t pay a dividend and, for decades, Buffett has asked the board to keep his annual salary at $100,000. The 86-year-old is steadily giving away his Berkshire shares to philanthropy.

He said Monday that he made more than $2.8 billion of donations last year. Yet his tax return shows only $5.5 million in deductions, mostly for allowable charitable contributions and state income taxes. The law “properly” limits what can be deducted, Buffett wrote.

He again dismissed the contention that Trump can’t release his own return because of an audit by the Internal Revenue Service.

“I have been audited by the IRS multiple times and am currently being audited,” Buffett wrote. “I have no problem in releasing my tax information while under audit. Neither would Mr. Trump -- at least he would have no legal problem.”

Jessica Ditto, a spokeswoman for the Trump campaign, declined to comment on Buffett’s remarks.

Trump, who has departed from roughly 40 years of tradition for presidential nominees by declining to release his returns or any tax information, has said he’ll make them public once the audit is complete and that returns wouldn’t give voters very much information.

Releasing full tax returns and schedules would disclose Trump’s income sources, charitable contributions and possible glimpses of his tax-minimizing strategies. Income reported from assets could provide at least some partial clues about the nature of those holdings, though not about their value or inner workings. His returns would also reveal any foreign income or foreign bank accounts.

Even if he didn’t release full returns, Trump could give voters at least some information -- that is, how much he made and how much he paid -- by releasing the sort of figures Buffett did, particularly if Trump provided several years’ worth of data.

During Sunday’s debate, Trump acknowledged for the first time that he had used a business loss of $916 million to avoid federal income income taxes -- though he didn’t say for how long, and he said such tax avoidance is common practice among wealthy businessmen.

Under rules in place at the time, Trump could have used the loss to avoid taxes on as much as $50 million in income a year -- for three years prior to the loss and 15 years after. Using old losses to reduce taxes on income in future years is known as a carryforward.

“I have copies of all 72 of my returns,” Buffett wrote Monday. “And none uses a carryforward.”

While Berkshire has been a sophisticated user of the tax code to limit its liabilities, Buffett has been outspoken for years about how the wealthiest people in the U.S. don’t pay enough income tax. To illustrate the point, he has said his secretary pays a higher rate than he does.

The billionaire was the inspiration of the so-called Buffett Rule, proposed by President Barack Obama and backed by Clinton, which would tax incomes exceeding $1 million at a minimum rate of 30 percent. The Democratic candidate reiterated her support for that plan Sunday.