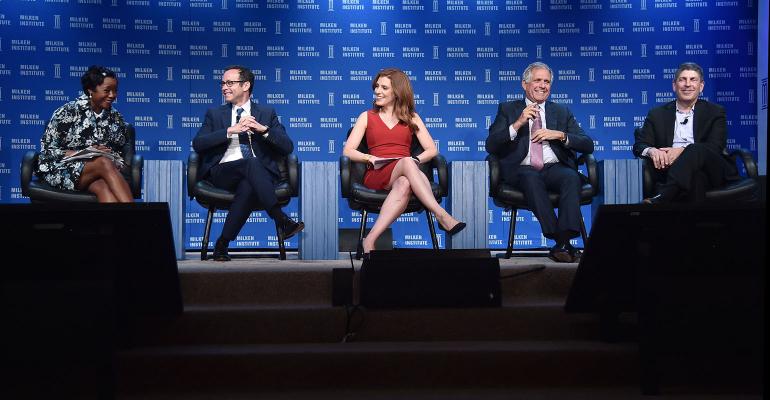 Four members of the Trump cabinet will be attending the annual conference.

(Bloomberg) --Four thousand of the wealthiest, most influential leaders in the world descend on Beverly Hills, California, this week for the annual Milken Institute Global Conference, in what amounts to a peer review of President Donald Trump’s first 100 days in office.

Trump’s voice will be represented at the event by four members of his cabinet: Treasury Secretary Steven Mnuchin, Commerce Secretary Wilbur Ross, Education Secretary Betsy DeVos and Elaine Chao, the Secretary of Transportation. Mnuchin kicks off the first full day of the conference Monday, just days since he started selling the administration’s tax plan.

Also on the agenda: former President George W. Bush and former Vice President Joe Biden. Both are set to be interviewed by Mike Milken himself, the onetime omnipotent credit investor who later pleaded guilty to securities fraud and now is a renowned philanthropist and public health advocate.

Amid yoga classes and panels on topics as disparate as agriculture and mortgage market structure, business leaders are set to weigh in on the Trump agenda. Dow Chemical Co. Chief Executive Officer Andrew Liveris and  Paul Atkins, a former U.S. Securities and Exchange commissioner, will join the conversation in a panel titled “The First 100 Days -- and the Next 1,000.” The U.S. Chamber of Commerce’s Jodi Hanson Bond and Geronimo Gutierrez, Mexico’s ambassador to the U.S., will join the debate on whether the North American Free Trade Agreement, which Trump has heavily scrutinized, should be scrapped.

Attendees who pay as much as $50,000 for all-access passes are treated to day-long events that include 6 a.m. workout classes and evening receptions with celebrities such as music producer Quincy Jones and filmmakers J.J. Abrams and Jon Favreau.

The conference is now in its 20th year. Proteges from Drexel Burnham Lambert, the firm where Milken created the market for high-yield debt, are in attendance every year to pay homage to Milken, who turned 70 last year. They include Apollo Global Management LLC co-founders Leon Black and Josh Harris, Crescent Capital Group’s Mark Attanasio and Jonathan Sokoloff, the managing partner of Leonard Green & Partners.

The presence of key Trump advisers is an ironic twist from last year’s conference. Business leaders then looked gloomily at the prospects of the contentious election, with some openly expressing disfavor for the billionaire Republican candidate. Trump was victorious six months later.