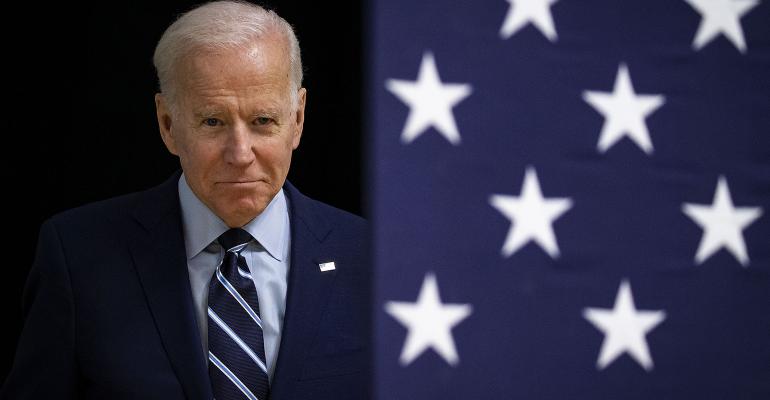 Biden’s billionaire tax faces a difficult road in Congress, where House Democrats already rejected including a similar proposal in their version of the Build Back Better plan that past last fall.

(Bloomberg) -- President Joe Biden made a fresh effort on Monday to persuade Congress to take steps to overhaul the tax code and squeeze more revenue from the largest companies and the wealthiest households.

The Treasury Department released the so-called Greenbook that details plans for $2.5 trillion in tax increases on corporations and high-earning households, including a modified wealth tax and eliminating the carried-interest tax break for investment funds. That’s on top of the $1.5 trillion of tax increases included in the House-passed version of Biden’s Build Back Better plan that weren’t detailed in this document. That bill is stalled in the Senate.

Senator Joe Manchin, a West Virginia Democrat, said he didn’t support Biden’s billionaire tax plan — and the lack of his vote means it would likely not become law. You can’t be taxed “on things you don’t have,” he said Monday evening. “You might have it on paper. There are other ways for people to pay their fair share, and I think everyone should pay.”

The Greenbook report accompanies the White House’s $5.8 trillion 2023 budget request, also released on Monday. It effectively serves as the revenue side of the ledger, against Biden’s spending priorities in the budget. The document includes several tax ideas  -- including raising the tax rates on capital-gains income, corporate profits and individual earnings -- that have already been abandoned in Congress because of lack of consensus.

The document serves as a wish list for Biden’s tax priorities and will likely be greatly revised as Democrats in Congress begin to shape a social spending and tax bill that meet the requirements of two lawmakers who sometimes have different priorities: Manchin and Kyrsten Sinema of Arizona.

The budget’s planned investments are “more than fully paid for through tax code reforms requiring corporations and the wealthiest Americans to pay their fair share, closing loopholes, and improving tax administration,” the Treasury Department said in a statement.

One of Biden’s most novel ideas is a proposal for a minimum tax on mega-millionaires and billionaires, including on their unrealized gains. The concept has been popular in progressive circles for years, but Biden shied away from it during the presidential campaign and during his first year in office. The proposal would raise an estimated $360 billion over a decade from roughly the wealthiest 20,000 households in the country.

Biden’s billionaire tax faces a difficult road in Congress, where House Democrats already rejected including a similar proposal in their version of the Build Back Better plan that past last fall.

The billionaire tax is a key fault line between moderate Democrats and progressives, who have been pushing for a robust overhaul to the tax code so that the wealthiest Americans pay significantly more. Senate Finance Committee Chairman Ron Wyden has been advocating for a series of related proposals for years.

“There’s no way to fix our broken tax code without getting at the problem of billionaires avoiding taxes for decades, if not indefinitely,” Wyden said in a statement. “While there are differences between the president’s proposal and the Billionaires Income Tax, we’re rowing in the same direction.”

House Ways and Means Chairman Richard Neal, who leads tax policy for that chamber, has yet to weigh in on the tax. He issued a statement supporting Biden’s budget, but it did not mention the billionaire tax. Spokeswomen for Neal, a Massachusetts Democrat, did not respond to a request for comment on his position on a tax on unrealized gains.

Biden’s Treasury appointees are talking with lawmakers on Capitol Hill about how to win support for the billionaires tax proposal, a Treasury official told reporters Monday. This plan includes some features that address concerns from prior proposals about how to tax wealth the same as work, the official said.

Manchin and Sinema, whose votes are critical for any partisan Democratic bill in the Senate, have rejected many of Biden’s previous tax proposals. Manchin has said he wants to reverse President Donald Trump’s tax cuts and favors higher taxes on the wealthy. However, he has criticized earlier versions of Biden’s billionaire tax, saying they are overly complicated.

Sinema has also rejected any increases to the existing tax rates, including the 21% corporate levy and 37% top bracket for individuals. That puts her out of step with most other members of her party who support raising rates on large businesses and rich taxpayers as a way to fund more social spending.

The wealth of U.S. billionaires has surged during the pandemic. More than $5 trillion is held by Americans worth at least $1 billion, according to the Bloomberg Billionaires Index. The wealth of this exclusive group -- more than 800 U.S. billionaires are tracked by the index -- has risen $1.56 trillion since the beginning of 2020, even after losing $169 billion so far in 2022. The vast majority of that increase is in the form of unrealized gains.

Biden’s proposal contains a number of proposals related to digital assets, including one that would require crypto exchanges and other brokers to disclose information on foreigners that invest in the U.S. through passive entities, such as partnerships. That would allow the U.S. to receive reciprocal information on its citizens through data-sharing agreements with other countries, Treasury said.

The department also proposed a change that would allow cryptocurrency dealers or traders to elect to recognize gains and losses on their crypto holdings each year, rather than when the assets are sold.

--With assistance from Ben Steverman and Steven T. Dennis.