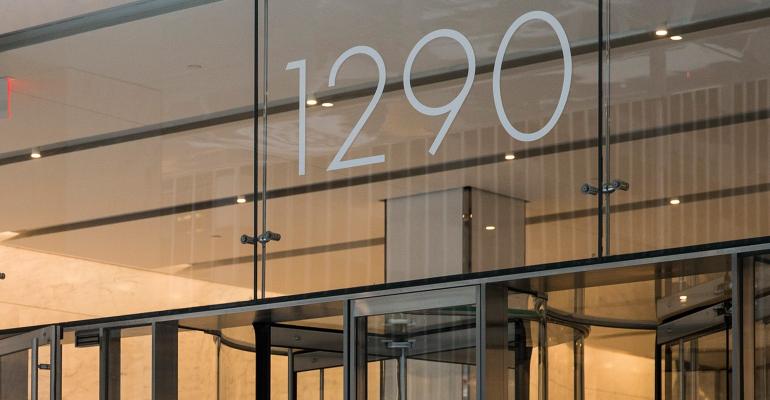 The so-called 1031 like-kind exchange rule was created a century ago to aid family farmers. It has evolved into a beloved tool of property moguls, Fortune 500 companies and real estate trusts that can use it to create a daisy-chain of tax avoidance.

(Bloomberg) -- President Joe Biden is pushing to close a tax break that helped his predecessor amass a fortune.

The Democrat has proposed narrowing a tax code provision that allows real estate investors to avoid capital gains taxes when they sell property, as long as they use the gains to buy more. Former President Donald Trump’s most valuable investment, which traces back to his $95 million purchase of a west-side Manhattan development site, has benefited from the rule.

In 2005, when Trump’s partners agreed to sell the site for $1.8 billion -- a deal Trump resisted -- his cut was about $500 million. Because the partners then used the capital gains from the sale to purchase two office towers, they and Trump didn’t owe any tax on their gains. Today, Trump’s stake in the buildings is worth about $1.2 billion before accounting for debt. Biden’s plan would eliminate that kind of maneuver for Trump and thousands of others with real estate investments.

The so-called 1031 like-kind exchange rule, named after a section of the tax code, was created a century ago to aid family farmers. It has evolved into a beloved tool of property moguls, Fortune 500 companies and real estate trusts that can use it to create a daisy-chain of tax avoidance.

It works like this: An investor buys a building for $4 million and sells it later for $10 million. By redeploying the proceeds into a new property within six months, she can defer paying taxes on her gains. She can repeat that process indefinitely.

When coupled with another tax break that wipes out all capital gains at death, the 1031 provision can enable real estate investors to forgo capital gains taxes entirely, enabling family dynasties to pass on riches to heirs virtually tax-free. Some wealth managers call the strategy “swap ’til you drop.”

Critics say the 1031 break has strayed far from its original purpose and become a multibillion-dollar giveaway that would be better spent fueling infrastructure investment and social programs. Repealing it could add $19.6 billion in tax revenue over 10 years, according to a proposed budget published by the White House on Friday.

Real estate executives say that would decrease the number of transactions, squelch economic activity and reduce property values. The National Association of Realtors argues that 1031 exchanges are crucial to keeping the commercial real estate market humming and that they’re primarily used not by the super-rich, but by less affluent retirees, investors and landlords.

Yet Internal Revenue Service data shows that more than one-third of the tax savings from 1031s goes to large institutional investors such as real estate investment trusts and corporations. The tax break is also used by the richest Americans, from the Trump and Kushner families on the East Coast, to billionaires scooping up hundreds of thousands of acres of ranch land in the American West.

Which tax bracket benefits more -- the top 10% or the top 1% -- is subject to debate, in part because there is no robust public database of 1031 transactions. Developers aren’t required to disclose when they take advantage of the break, and specific IRS data aren’t publicly available.

“Disproportionately, the benefit goes to wealthy people,” said Mitchell Gans, a professor of tax law at Hofstra University, who pointed out that most Americans of modest means can’t afford to invest in real estate to begin with. “And the operative word is ‘disproportionately.’”

The Biden administration’s rule change would avoid hitting smaller transactions by allowing as much as $500,000 of capital gains to pass tax-free in any exchange.

Still, the proposal has stirred opposition beyond the real estate industry. The agricultural lobby in Washington has urged Congress not to make changes that would hurt small family farmers, and their concerns have been echoed by some Democrats from rural states, including representatives Jim Costa of California and Cindy Axne of Iowa. Several Democrats who have supported higher taxes for the rich didn’t respond to requests for comment about Biden’s proposal.

“I think most Democrats in Congress would agree that 1031s are bad policy and there’s no economic reason for that kind of tax break,” said Victor Fleischer, a former tax counsel for Senate Democrats who now teaches law at the University of California at Irvine. “But there are real estate people in every district, and the politics of the issue means that there’s a small number of people who fight for it very intensely. So there’s not much benefit for getting out ahead on it.”

During the Obama administration, White House attempts to cut 1031s were blocked, but congressional Republicans rescinded the break for other investments, such as art, as part of their 2017 tax overhaul. At the time, art dealers expressed concern that the change would reduce Americans’ presence in global art markets -- though high-profile U.S. buyers have made eight- and nine-figure purchases since.

Now, Sam Middleton, a real estate broker whose family has specialized in selling Texas land for more than a century, says losing 1031 exchanges would be a crippling blow to the market for family estates and family farms. He says about half of his firm’s deals involve 1031 exchanges.

“It’ll kill my business,” Middleton said. “For the large ranches, and for the smaller properties, too, the $5- to $10 million ranches for people who just want a place to get away for the weekend. It’s a very important part of the finances.”

His Chas. S. Middleton and Son firm is currently handling deals involving some of the state’s most storied properties: the Matador Ranch, operated by a subsidiary of Koch Industries Inc.; and the 6666 Ranch, which is being purchased by a group of investors including Taylor Sheridan, the actor and director who created the TV show “Yellowstone.” Middleton said he did not know whether either group planned to use a 1031 exchange. Spokespeople for Koch Industries and Sheridan didn’t respond to requests for comment.

Middleton is also brokering the sale of part of the 260,000-acre La Escalera ranch south of Fort Stockton, Texas. San Antonio construction magnate Gerald Lyda benefited from a 1031 exchange when he bought the property in 1992 using his capital gains from selling a New Mexico ranch to cable television billionaire Ted Turner. In an interview archived at the University of Texas at San Antonio, Lyda said the transaction’s details were too complex for him, so he “spent over a hundred thousand dollars getting it done right through professionals.”

Lyda died in 2005; his widow and other family members have run La Escalera as a hunting ground, farm and Black Angus cattle ranch, while earning additional income leasing the property’s energy and mineral rights.

Now they’re among the largest land owners in the U.S., according to the Land Report, and they’re selling 35,000 acres at an asking price of $41 million to billionaire real estate mogul Stan Kroenke, Middleton said. Kroenke, who married into the Walton family of Walmart Inc. fame, owns hundreds of retail shopping outlets, as well as the Los Angeles Rams, the Colorado Avalanche NHL franchise, the Denver Nuggets NBA team and Britain’s Arsenal F.C. soccer team. A spokesman for Kroenke declined to comment for this story.

A cottage industry of lawyers, brokers and intermediaries has developed to allow smaller investors to reap tax savings from 1031 transactions. Tens of thousands of small investors each year put their capital gains in pooled investment vehicles, called Delaware Statutory Trusts, to purchase properties and develop real estate. A study funded by the real estate industry and based on voluntary data from buyers and sellers estimates that the average purchase price of properties bought using 1031 exchanges is $500,000 and that 88% of all exchanges ultimately lead to a taxable sale.

“Section 1031 encourages real estate transactional activity, and in doing so, is a powerful stimulator of the U.S. economy,” said Suzanne Goldstein Baker, co-chair of the government affairs committee at the Federation of Exchange Accommodators, which lobbies to preserve the policy.

While some publicly traded companies disclose their 1031 activity in broad terms in SEC filings and investor calls, most private companies that use the rule make few details public. In Trump’s case, specifics came to light during a legal battle in which he accused his partners of selling the properties for less than they were worth. Eric Trump and Trump Organization General Counsel Alan Garten didn’t respond to questions seeking comment on the company’s use of the rule.

The family of Trump’s son-in-law, Jared Kushner, also benefited from a 1031 transaction that will take the sting out of their plan to sell a building for less than they paid for it. In 2007, as the U.S. property market was reaching an apex, Kushner Cos. sold more than 16,000 apartments for $1.9 billion. That included about $1 billion of capital gain, Charles Kushner, Jared Kushner’s father, said in a December email to Bloomberg News. “As it is common practice in the real estate industry, we looked to take advantage of the 1031-exchange provision of the tax code,” the elder Kushner wrote.

The family then purchased a Chicago office tower for $275 million, allowing for the deferral of that much of the capital gain. Thirteen years later, the company now has an agreement to sell that Chicago property, too. Last year Kushner Cos. was in talks to do so for about $180 million, though the closing of the deal has been delayed, two people familiar with the transaction said.

It’s never a good deal to sell properties for less than their purchase price, but in this case, the 1031 rule will allow Kushner Cos. to continue to defer capital gains from the 2007 sale equal to the value of the Chicago building’s eventual sale price. “We intend to use the same 1031-exchange provision of the tax code to defer” taxes on that amount as well, Charles Kushner wrote, adding that the $28 million in cash that his company will take out of the building is greater than the $17 million it put in.

A spokeswoman for the company said last week that the sale is expected to close later this year.

Biden may find that Trump is something of an unwitting ally in his attempt to roll back the tax break. By eliminating the 1031 break for transactions involving equipment and art, Trump’s 2017 tax law neutralized some prior support.

For now the real estate industry doesn’t seem too concerned.

“They throw this in in every first salvo of budget or tax negotiations, and it historically has always come out, I think that will happen again,” Joe McBride, head of commercial real estate finance at Trepp, said on a recent episode of the data-and-analytics company’s podcast. “Let’s be serious. Every Democrat in Congress probably has some sort of real estate investments going on or they have many wealthy friends who do and wealthy lobbyists who do. So it would surprise me if this actually does go through.”