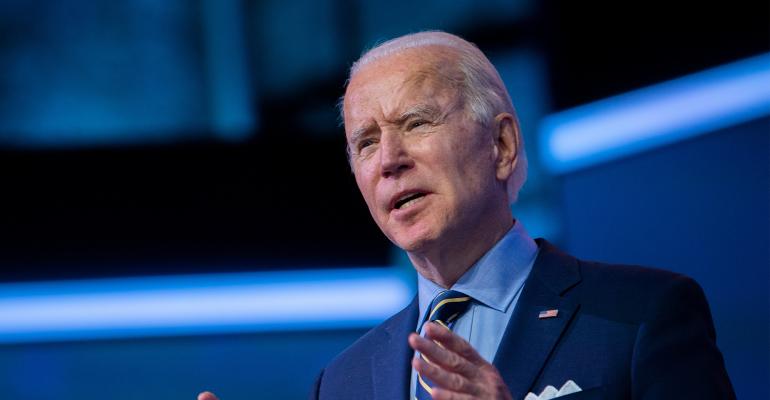 The president’s proposal is not only plagued by practical problems, but also undermines one of the core goals of a progressive tax system.

(Bloomberg Opinion) -- In his upcoming budget, President Joe Biden proposes reviving the wealth tax, a concept popularized by his rivals in the Democratic presidential primary two years ago. The proposal — now dubbed the “Billionaire Minimum Income Tax” — includes a few improvements over the 2020 version. Nonetheless, it remains a convoluted mess whose primary benefit could be achieved by simply eliminating a loophole in the current tax code.

A core difficulty faced by early wealth tax proposals is uncertainty over whether they are constitutional. The Constitution stipulates that any direct tax on citizens be levied such that each state pays the same amount per capita, an onerous requirement that makes it almost impossible to impose a wealth tax. The 16th Amendment, however, made income taxes legal. So, rather than levy a 2% tax on wealth each year, as Senator Elizabeth Warren envisioned, Biden’s plan would levy a onetime charge of 20% whenever an asset increases in value.

This structure is similar to the familiar capital gains tax, with one significant wrinkle: The tax is owed regardless of whether the underlying asset is sold.

The problem is that the taxpayer may not have enough cash on hand to pay the tax. To mitigate this, the president’s proposal allows taxpayers to pay over time — up to nine years from when the tax first goes into effect. An additional provision allows owners of illiquid assets to defer their payments for even longer periods, but with interest.

There is also the question of what happens if the value of the asset falls. Consider an early investor in the dot-com boom who saw her paper wealth evaporate as the market crashed. Would she have received a credit against any future taxes owed?

The proposal also puts very long-term investors — the type who are inclined to ignore the booms and busts of the market — at a disadvantage. They may be forced to sell at the peak, but they may not have the means to buy back during the trough. So they necessarily become more focused on the short term, with an eye toward recouping enough cash gains to at least cover their tax liability.

This isn’t a mere technicality. It goes to the heart of what a progressive tax system is trying to accomplish. To the extent someone keeps her wealth in investments, instead of spending it, she is providing the economy with the tools and equipment it needs to increase productivity and wages. That is precisely the kind of behavior a capitalist system should encourage.

The current system encourages this by not taxing investments; instead, the more ostentatious their lifestyle, the more taxes the wealthy pay. The theory is that it is better to tax this largely unproductive consumption than to tax capital gains, even if they allow great wealth to accrue.

Biden’s proposal undoes that trade-off, but awkwardly. Even liberal economists acknowledge how punitive strict enforcement of a 20% tax would be on the longest-term investors. The only virtue of this approach is that it would prevent the ultrawealthy from avoiding capital gains taxes entirely, as many do now by holding on to their assets until they die.

At that point, their assets are subject to the inheritance tax — but so are any cash gains that have already been realized. The loophole to the estate tax is that if the heirs then sell their inherited assets immediately, they owe no capital gains tax. They pay capital gains only on the amount the asset increased in value since they inherited it.

This feature, known as the step-up in basis provision, encourages heirs to liquidate their inheritance rather than keeping it invested in the economy. By eliminating this provision, Congress could reap most of the benefits of Biden’s proposal without further complicating the tax code and discouraging long-term investment strategies. This is the approach Congress should take.

To contact the author of this story:
Karl W. Smith at [email protected]