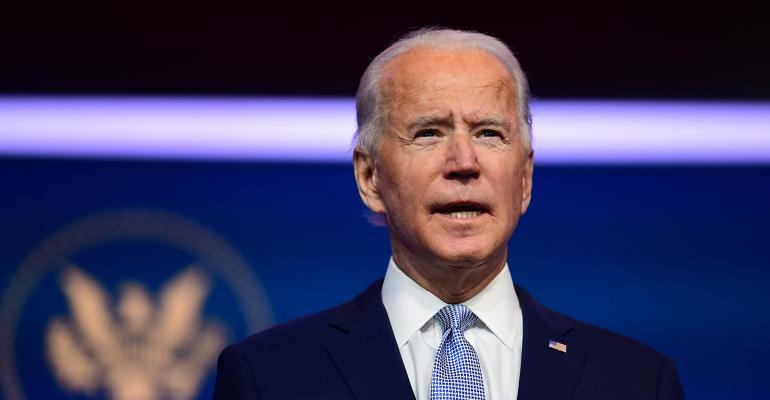 Biden Aims at Top 0.3% With Bid to Tax Capital Like Wages

President Joe Biden's plans to double the capital gains tax for those earning $1 million or more would affect only about 0.32% of American taxpayers.

(Bloomberg) -- President Joe Biden wants to end the preferential U.S. tax treatment of investment income that has benefited the nation’s wealthy as he seeks to fund a sweeping new social-spending program. But he will need to overcome a major political hurdle in Congress to do so.

The White House plans to propose almost doubling the capital gains tax rate for those earning $1 million or more, to 39.6%, according to people familiar with the proposal. That wouldn’t affect many. Only about 0.32% of American taxpayers reported adjusted gross income of more than $1 million and capital gains or losses on their returns, according to Internal Revenue Service tax return data from 2018.

The move would send the top federal rate on the appreciation in assets sold by the rich as high as 43.4% when including a surtax to help pay for Obamacare. And it would upend a century-old precedent of under-taxing investment relative to wages and salaries.

White House Chief of Staff Ron Klain emphasized in a tweet Friday that the proposal, which Biden “campaigned on extensively, changes the tax rate for less than 1% of Americans (in fact, less than 1/2 of 1% of Americans).”

Related: Wall Street on Tax Plan: ‘It Will Incentivize Selling This Year’

Surging stock and property prices over the past year only strengthened the Biden team’s determination to follow through on campaign pledges to demand higher taxes from the best-off. The president is betting the initiative will be popular enough to win passage in Congress, where he can’t lose a single Democratic vote in the Senate and only a handful in the House, since Republicans are likely to be united in opposition.

“If a 1% fall in stock prices is all that you get from a really major increase in capital gains taxes that’s not a big problem,” Nobel economics laureate Paul Krugman said on Bloomberg TV. “Biden has an ambitious agenda” and to help pay for it, “some significant tax increases are going to be part of the story,” he said.

Biden campaigned on equalizing the capital gains and income tax rates for wealthy individuals, saying it’s unfair that many of them pay lower rates than middle-class workers.

The new marginal 39.6% rate would be an increase from the current base rate of 20%, the people said on the condition of anonymity because the plan is not yet public. A 3.8% tax on investment income that funds Obamacare would be kept in place, they added.

Biden is expected to release the proposal next week as part of the tax increases to finance social spending in the forthcoming American Families Plan.

Other measures that the administration has discussed include enhancing the estate tax for the wealthy. Biden has warned that those earning more than $400,000 a year can expect to pay more in taxes. The White House has already rolled out plans for corporate tax hikes, which go to fund the $2.25 trillion infrastructure-focused American Jobs Plan.

“It’s going to cut down on investment and cause unemployment,” Chuck Grassley of Iowa, a top Republican on the Senate Finance Committee and former chair of that panel, said of the Biden capital-gains plan. He lauded the result of the 2017 tax cuts, and said, “If it ain’t broke, don’t fix it.”

White House economist Heather Boushey countered on Friday that research on the 2017 tax reductions showed that “we did not see that bump-up in investment” advertised about the plan.

GOP lawmakers on Thursday called for repurposing previously appropriated, unused pandemic-relief funds to help pay for their counteroffer infrastructure plan. The group underlined opposition to tax increases, other than a potential revamp of the levies that go toward highway funding in a way that would mean higher taxes on electric vehicles.

Biden will detail the American Families Plan in a joint address to Congress on April 28. It is set to include a wave of new spending on children and education, including a temporary extension of an expanded child tax credit that would give parents as much as $300 a month for young children or $250 for those six and older.

Biden’s proposal to equalize the tax rates for wage and capital gains income for high earners would greatly curb the favorable tax treatment on so-called carried interest, which is the cut of profits on investments taken by private equity and hedge fund managers.

The plan would effectively end carried interest benefits for fund managers making more than $1 million, because they wouldn’t be able to pay lower capital gains rates on their earnings. Those earning less than $1 million may be able to still claim the tax break, unless Biden repeals the tax provision entirely.

The capital gains increase would raise $370 billion over a decade, according to an estimate from the Urban-Brookings Tax Policy Center based on Biden’s campaign platform.

For $1 million earners in high-tax states, rates on capital gains could be above 50%. For New Yorkers, the combined state and federal capital gains rate could be as high as 52.22%. For Californians, it could be 56.7%.

“It’s enough to bring fear into the taxpayers’ hearts, whether they are a Republican or a Democrat,” Christopher Boyett, a partner at law firm Holland & Knight who advises high-net worth individuals on tax planning, said of the Biden plan. “People are taking this seriously. It’s a high-anxiety time.”

Congressional Democrats have separately proposed a series of changes to capital-gains taxation, including imposing the levies annually instead of when they are sold.

“There ought to be equal treatment for wages and wealth,” Senate Finance Committee Chairman Ron Wyden, an Oregon Democrat who’s the chamber’s top tax-writer, told reporters in a phone briefing Thursday. “On the Finance Committee we will be ready to raise whatever sums the Senate Democratic caucus thinks are necessary.”