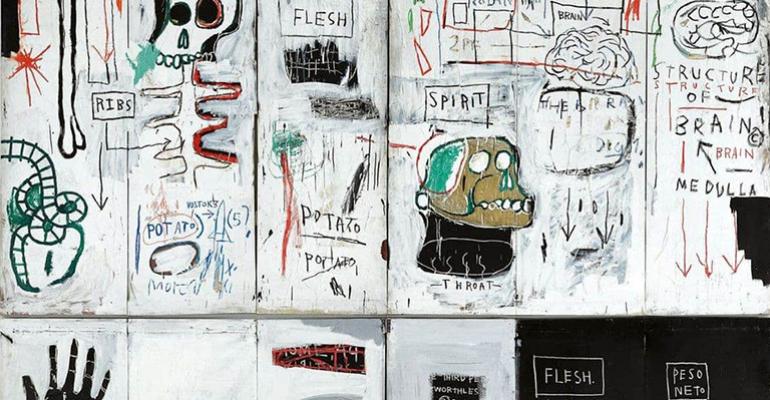 “This action arises from a greedy, malevolent, fraudulent, bad-faith and (unfortunately) successful scheme to financially devastate the Estate [of Dolores O. Neumann] and, indirectly, Belinda [Neumann-Donnelly], by destroying the value of the Estate’s most valuable asset—Jean-Michel Basquiat’s masterpiece, ‘Flesh and Spirit’” the suit, filed in New York State Supreme Court, states. So began the latest lawsuit surrounding last month’s sale of a major Basquiat work.

The painting sold for $30.7 million at Sotheby’s last month—essentially for the auction house’s asking price—but Belinda Neumann-Donnelly, representing her mother’s estate, claims that it would have sold for 10s of millions of dollars more had her father, Hubert Neumann, not brought a lawsuit to block the sale.

Belinda further alleges that for many years, her father, whose family owns one of the most valuable private collections of 20th century art in the United States, “has been fraudulently buying and selling art owned by a trust for which he had no authority to act.” Her complaint states that Hubert was never granted letters of trusteeship over such trust and, as a result, “he has destroyed the provenance for all of that art.”

As for Flesh and Spirit, Belinda contends that her mother purchased the Basquiat work in 1983 with money she received from her parents and that she retained sole ownership of it at the time of her death. Belinda’s complaint states that she, as preliminary executor for her mother’s estate, had the right to sell the painting as directed by her mother’s will.

However, on the eve of auction, Hubert sued to block the sale of the masterpiece, alleging that it violated an agreement he had in place with Sotheby’s granting him marketing approval rights on the sale of any works from the “family collection.” A New York judge definitively rejected Hubert’s request after finding that he was a “stranger to this piece of art” and had “absolutely no right or even any interest in” the work.

By then, Belinda states in her suit, the value of the painting had been severely damaged because her father’s “effort to sow confusion in the marketplace” had created uncertainty about the estate’s right to sell the painting and scared away potential bidders.

Allegations of Fraud and Deception

Both of the suits highlight a contentious family dispute peppered with allegations of fraud and deception.

Belinda, whose complaint says that her mother had been separated from her father for 29 years, claims that her father emotionally and physically abused her mother. The complaint provides that her father’s “abuse of Dolores was so great that she went out of her way to ensure that he never reaped the benefit of having been married to her.”

Dolores executed a will shortly before her death that explicitly disinherited Hubert “to the fullest extent permitted by law, because he ha[d] been physically abusive to [her] for decades and has threatened [her] life.” The will instead gave the bulk of Dolores’ estate to their daughter Belinda and provided the couple’s other daughters, Melissa and Kristina, a modest share of the estate.

Hubert has denied Belinda’s accusation and, in his complaint, alleged that the will was the product of undue influence and is therefore invalid.