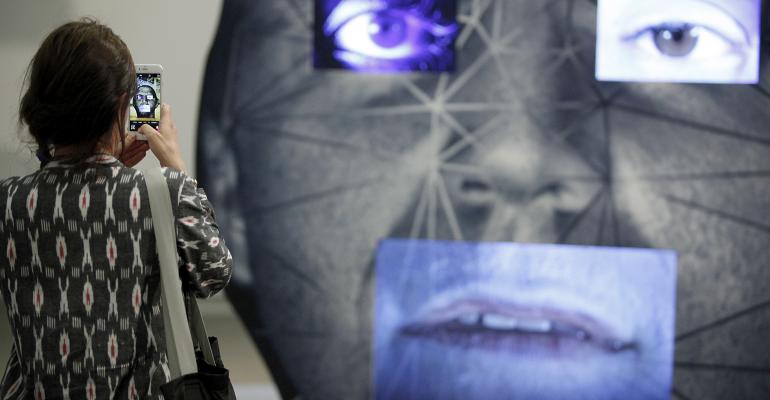 Starting on Monday, wealth managers and financial advisers will rub shoulders with the art world elite amid more than 3 billion euros ($3.4 billion) worth of works up for grabs at Art Basel.

(Bloomberg) --For a few days each June, the epicenter of the art trade shifts from New York to Basel, a small city on the border of France, Switzerland and Germany. There, the world’s top modern and contemporary fair, Art Basel, attracts scores of billionaire collectors.

Starting on Monday, wealth managers and financial advisers will rub shoulders with the art world elite amid more than 3 billion euros ($3.4 billion) worth of works up for grabs, according to insurer AXA Art. UBS Group AG, the lead sponsor of Art Basel since 1994, expects to host 3,000 clients at its lounge at the fair, which runs through June 18. Representatives of Morgan Stanley, Bank of America Corp., Citigroup Inc. and Vontobel Holding AG are also planning to attend and entertain clients -- or snag new ones.

While strolling the aisles filled with works by Pablo Picasso, Francis Bacon or the latest hot young artists, bankers may bump into billionaire money manager Steve Cohen or Russia’s Roman Abramovich, who have attended in the past. At the fair last year, Liu Yiqian, Chinese taxi driver turned billionaire, bought a 36-foot-wide work by Gerhard Richter, priced at 3 million euros.

“In the last several years, more art has been bought as an investment than ever before,” said Bob Mnuchin, whose New York gallery is showing a $12 million painting of a gun by Andy Warhol at its booth. “Other assets seem to be less certain to people, so art, which has an international, not national identity, seems like a more comfortable place to be."

At night, the mega-wealthy can be found at Les Trois Rois, a 336-year-old hotel overlooking the Rhine River, where galleries and auction houses host lavish dinners and the bar stays open into the wee hours.

But being among them isn’t enough.

“You have to be able to offer content,” said Dan Desmond, a private wealth adviser at Morgan Stanley. “No one is going to Basel to have dinner with their banker unless that banker knows about art.”

The good news for financiers is that art is increasingly seen as an investment and not just a passion. The global art market has more than tripled in value since 2003. Last month a painting by Jean-Michel Basquiat that was bought for $19,000 in 1984 sold for $110.5 million in New York.

Family offices and rich investors are flocking to fairs as a one-stop place to shop -- there will be 4,000 artists exhibited this week. While there, financial companies see creating special experiences for customers as a tool in deepening relationships.

“They see an opportunity to mingle and be associated with 0.001 percent,” said David Schrader, who recently traded a career on Wall Street for Sotheby’s.

To make sure wealth managers know their art, some banks offer training and have in-house experts. At Citi Private Bank, two members of its art advisory group have Ph.Ds in art history and the others have worked at either a museum, a gallery or auction house, according to  Suzanne Gyorgy, the firm’s head of art advisory and finance.

UBS clients will be able to take a break in the company’s private lounge where 20 artworks will be on display from the bank’s corporate collection, including a new acquisition by artist Shahzia Sikander.

"It has given us a common vocabulary with our clients,” Steve Schroko, managing director and head of private bank and trust solutions at UBS, said of the company’s collection.

Morgan Stanley is organizing a dinner to introduce clients to executives of Art21, a nonprofit organization known for its films on contemporary artists. The gathering will also honor artist Omer Fast, whose work is featured at the fair.

Making the trip to the small town -- with a medieval cathedral at its center -- is also about efficiency. Evan Beard, a national art services executive for Bank of America’s U.S. Trust wealth-management unit, is going to Basel for 24 hours with several colleagues. It’s easier to connect there in one swoop with clients who live in London, San Francisco and New York, said Beard, whose firm finances more than $5 billion in art loans.

The fair is “the Super Bowl of the art world,” he said. “Art Basel has become the biggest planet in this galaxy and has the strongest gravitational pull. You can’t avoid it.”