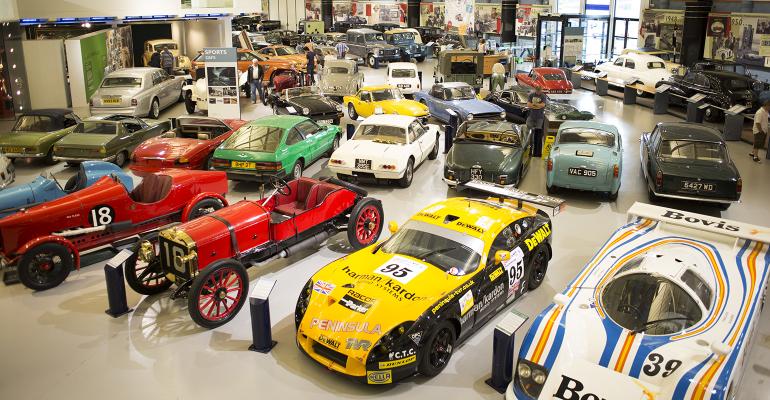 The Art of Managing Collections

Logically grouping and organizing the assets is key.

Simplifying complexity is a critical first step to effectively planning for collections. It is most useful to aggregate assets with similar characteristics into groups, then organize these groups based on knowledge of tax and market forces and the owner’s desires.

The Internal Revenue Code will characterize or “type” the owner for subsequent tax treatment as if the assets are sold today. This IRS Code recognizes four distinct types of taxpayer based on the role that the taxpayer plays prior to a transaction: collector, investor, business investor and dealer. The opening presumption of the IRS is that all taxpayers are collectors—unless the taxpayer can prove otherwise. Collectors face the highest capital gains tax and fewest deductions. A qualified expert can help the owner position himself to obtain the most desirable tax status.

Market forces are determined by general standards of taste, critical acclaim, the vagaries of provenance and authenticity, and the role the item plays in the culture.

Once each asset is aggregated into a logical group, a qualified expert can develop guidelines for the owner in order to:

1) reduce the risk of the owner slipping back into the undesirable “Collector” tax status;

3) prevent the inflation of estate and gift taxes by the IRS through audits.

The owner and the expert together can aggregate items into groups based on the owner’s current objectives for the ultimate disposition of the assets. Focusing on the owner's goals “as of the moment” we group the items according to the owner's ultimate intentions for each group. A properly constructed plan can provide a disciplined framework while still allowing for alternative scenarios to accommodate changes in the owner’s goals over time.

Example 1. For 40 years Ms. P. has collected and restored 22 grand pianos dating from the 18th and 19th centuries. Three of the pianos are regularly leased out, six are available for sale, and 13 are part of Ms. P.'s personal collection and are neither leased out nor for sale, and she currently intends to gift them to a specific music conservatory after her death. She intends for the three leased and six for-sale pianos to be “kept in the family.” Based on Ms. P.'s goals, together we aggregated these 22 pianos into three groups:

A) Business Investor, for the three pianos that are regularly leased out and will remain in the family;

B) Collector, for the 13 pianos she will neither lease out nor sell and will donate to the music conservatory at death; and

C) Investor, for the six pianos she is willing to sell.

Some of the pianos are in two groups, as shown below. 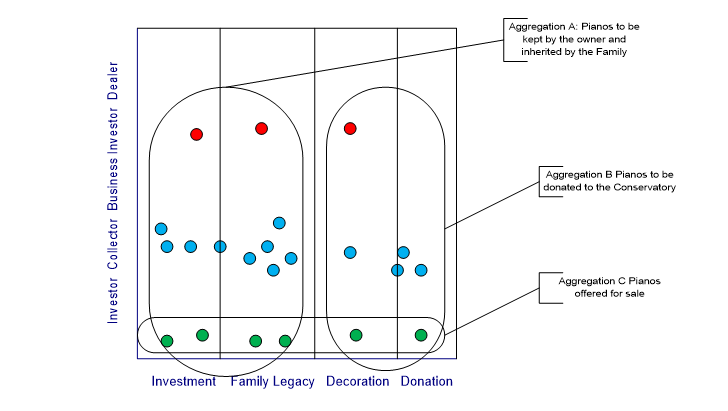 By using these classifications, Ms. P. will avoid paying the maximum income and estate taxes that she would otherwise face if treated as a Collector by the IRS.

The plan depends on keeping records. For example, for the six pianos for sale in Group C to be considered an investment, Ms. P. must keep records showing listing with dealers and other prospective agents, records showing that offers to purchase have been seriously considered, and records showing a history of buying and selling pianos.

Additionally, the aggregations allow for better management of the costs of maintaining the collection. Since Ms. P. never intends to sell or offer for lease the 13 pianos set aside for gifting to the music conservatory, there is no need for her to schedule these pianos for loss on their P&C insurance. In contrast, she should schedule the other nine pianos because she has a financial interest in them.

Example 2. Over 70 years, Mr. B. collected 7,000 old coins, some of them quite rare. His collection included U.S. coins, World coins minted outside of the U.S. and ancient coins. Since he never sold a single coin, the IRS would classify him as a Collector. Mr. B. did not expect to live much longer and none of his heirs had any interest in coin collecting, so he intended to donate his collection to promote numismatics, especially among younger collectors. Together we created an operating private foundation into which the collection would pass at Mr. B.'s death.

We aggregated Mr. B.'s 7,000 coins by source (U.S., world, and ancient coins) and by the role each coin plays in his collection. The roles include: i.) key coins, which carry a numismatic premium; ii.) semi-key coins, which play a role in completing a coin type series but are not as rare as key coins; iii.) “fad” coins, which are popular due to design, eye appeal, etc.; and iv.) significant coins, which are of a quality to be “type” coins.

Mr. B.'s collection was divided into two groups, Group 1 includes coins that were graded and “slabbed” into a plastic case, so enhancing their commercial value. These slabbed key coins and semi-key coins were to be sold at auction as part of the settlement of Mr. B’s estate. Group 2, the more significant coins, were digitally imaged; and, with the proceeds from the sale of the slabbed coins, a website and online reference catalog were developed for the world coins of significance. The fad coins were to be given, through local coin clubs, as prizes to young numismatists for papers, collecting and other events to promote the hobby. 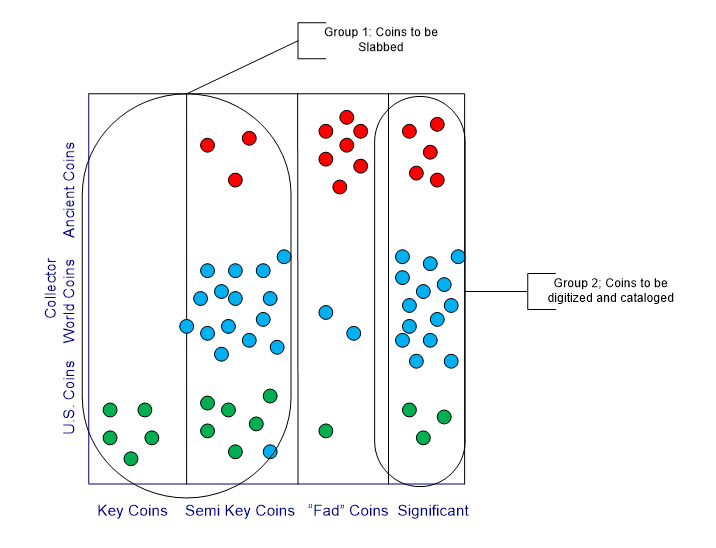 These two examples involved neither 1) collections that would be accepted by cultural institutions en toto, nor 2) owners who could afford to heavily endow their collections. Through aggregation and expert management, a collection can be refined to be acceptable to a cultural institution, can pay for itself and can leverage charitable gifts to preserve family ownership, where that is one of the owner’s goals.

In each example, the inventory number, or other shorthand way of describing the item, defines the role the item plays in the collection and the rules or guidelines for the management of the group based on the goals of the owner. The complexity of the collection is further simplified because we know exactly which specific items to: 1) sell, if liquidity is required in the estate; 2) donate, now or at death; and 3) gift, either over time or at death. We then can draft a plan to: 1) allow for the costs of selling items to be a deduction as an estate administration expense, hence reducing estate taxes; 2) leverage the charitable donations through the use of charitable trusts; 3) inform and prepare the beneficiaries for ownership after the collector’s death; and 4) keep the owner’s collection alive and vibrant.

Management of artwork and other collectibles can be simplified by aggregating assets based on the role that the owner plays for income tax purposes and their goals in life and at death. Further, to manage collections effectively, we need perceptive market analysis with the ability to sort significant trends from fads, we need detailed expertise with income and estate taxes peculiar to tangible assets, and last but not least, we need to be sensitive to the feelings and emotions peculiar to the collector and heirs. All this makes for a tall order, so seeking specialized expertise in advance of need is probably the only way for the typical collector to maximize the value of his or her collection.

Matthew S. Erskine is the managing partner at Erskine & Erskine.