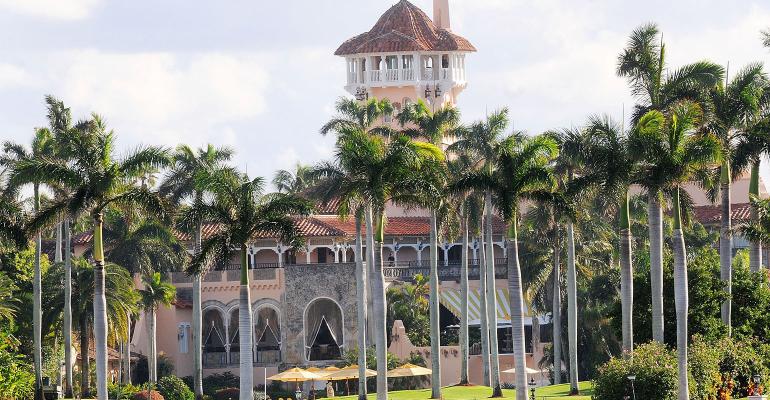 Anyone Can Be a Member at Mar-a-Lago

All you need is enough money.

(Bloomberg) --For all the outsized lore about its wealth, privacy, and byzantine social mores, Palm Beach, Fla., is an almost ridiculously thin strip of land, at times measuring barely 400 feet across.

Mansions, most of which are surrounded by hedges just high enough to indicate their colossal size, line up one next to the other on the edge of the beach. Parts of the island are so narrow that it’s only one-lot deep, which affords double-sided views of Lake Worth Lagoon and the Atlantic.

Drive north along the barrier island’s single road, though, and the land widens. And on this broader swath is Mar-a-Lago, the onetime residence of cereal heiress Marjorie Merriweather Post and now a private club owned by President Donald Trump.

In many ways Mar-a-Lago is the antithesis of the area’s traditional WASP-y clubs—the Beach Club, the Bath and Tennis Club, the Sailfish Club. The Everglades Club, Palm Beach’s oldest and founded in 1919 is what Nicholas Golubov, research director for the Historical Society of Palm Beach, called a bastion of “the old, Palm Beach elite.”

Trump’s business model in Palm Beach, by comparison, has been a beacon of inclusion. As long as potential members had the $100,000 entry fee (bumped up to $200,000 in January), there was a good chance that they’d be accepted. In a further departure from Palm Beach taste, Trump allowed non-members, as well as members, to rent spaces for bar mitzvahs, bat mitzvahs, weddings, and charity galas. Anyone can party at the new Winter White House, as long as they can afford it.

“I think it’s the best thing Trump did in his whole life,” said Laurence Leamer, the author of the book Madness Under the Royal Palms: Love and Death Behind the Gates of Palm Beach. “He opened up this island. He also had Jews and gays and African Americans— he even had the first gay wedding.”

A Point of Contention

Mar-a-Lago has been a flash point between Trump and Palm Beach locals ever since he bought the estate in 1985. The property had previously sat unoccupied for more than a decade: When Post died in 1973, she willed the estate to the U.S. government as a “winter White House,” but successive presidents Nixon, Ford, and Carter never took her up on it. “The Palm Beach beau monde is both baffling and uninteresting,” wrote Martin Amis in a 1979 essay for Tatler, adding that the town is “an enigma that you don’t particularly want to solve.”

Four years after the property was returned to the Post foundation in 1981, Trump negotiated a cut-rate price reported to be $8 million and moved in with his then-wife Ivana, an outsider amid an impenetrable wall of old-money elitism. “[The community] didn’t like brash Donald Trump at all,” Leamer said.

There were a series of lawsuits, threatened and real, in the 1990s between Trump and the town of Palm Beach. Claiming that he was being unfairly targeted because he represented an open-door policy in a closed-door town, Trump reportedly sent the Palm Beach town council copies of the movies A Gentleman’s Agreement and Guess Who’s Coming to Dinner.

In 2006, the town fined Trump $1,250 per day for an oversize flag on the club grounds; after a countersuit and a settlement, Trump agreed to donate $100,000 to charity, according to the Sun Sentinel. Even as he was running for president, Trump filed a lawsuit claiming that the Palm Beach airport’s flight path over his estate was a form of harassment. (He later dropped the claim.)

Most Palm Beach clubs have unapologetically restrictive membership policies, but resist any notion that those policies have anything to do with race, creed, or color. “That’s an old-fashioned view, certainly of our club,” said John Newman, general manager Sailfish Club. “We have no discrimination in our club; members have to be sponsored by a current member, but we have all faiths in our club.” (The Bath and Tennis, Beach, and Everglades clubs declined to comment for this article; Mar-a-Lago did not respond to requests for comment.)

Even beyond its semi-open door policy, Trump went further in an effort to make Mar-a-Lago the most attractive club on the island. The Everglades might have a retractable roof and its signature coconut cake, and the Bath and Tennis might have spirited bridge games and an in-house hair salon. Mar-a-Lago has buffets that are almost baroque in the number of options. Dinners are served on Post’s original china, all presided over by a painting of Trump dressed in an approximation of tennis whites.

Most of Mar-a-Lago is shielded behind a hedge, but as you drive around a bend on the two-lane South Ocean Boulevard (speed limit: 30 miles per hour), the property opens up, its rolling lawn sweeping from the massive, turreted Mediterranean mansion to its beach-side pool, which is ringed by yellow-and-white-striped umbrellas.

Turn through the club’s (relatively) unobtrusive white gate, flanked by decorative tiles, and visitors proceed up the palm-lined drive to the 110,000-square-foot home’s ornate, quasi-Moorish, quasi-gothic stone entrance, which is adorned with an elaborate wrought-iron railing. Inside, the entryway has a series of stone crowns mounted on the walls, as well as a rather baronial, hand-painted, beamed ceiling.

Dozens of similarly decorative rooms from the original home are available to members, including the “Spanish room,” with its gold-leaf ceiling, and the “Dutch Room,” which was made from the wood of a schooner and tiled in—you guessed it—blue and white Dutch tiles. A more recent edition is the club’s massive ballroom, decorated in a Busby Berkeley version of Versailles, which can seat more than 800 guests.

The overall effect isn’t subtle, and that seems to sit fine with members, who reportedly include billionaire industrialist William I. Koch, New England Patriots coach Bill Belichick, and real estate titan Richard LeFrak. Whether or not members are similarly sanguine about the increased security, protesters, and scrutiny brought by the president’s repeated recent visits is less certain.

Trump made his fourth visit to the estate as president this weekend; Jeff Sessions, his attorney general, was also photographed at the club. Three weeks ago, Trump hosted Shinzo Abe of Japan there and created a kerfuffle as the two seemed to react, alongside fellow diners, to a ballistic missile test in North Korea. Trump has kept the club in the spotlight with the news he’s building a helipad on its 17-acre property, indicating that he intends to continue to use the retreat frequently while in office.

For some of the town’s residents, Mar-a-Lago’s—and Trump’s—reputations are a deterrent. For others, it’s the reason to go. “I know people who refuse to go to Mar-a-Lago, they think it’s the worst,” said Leamer, the author. “But to me, it’s the most exciting club in Palm Beach, by a long shot.”