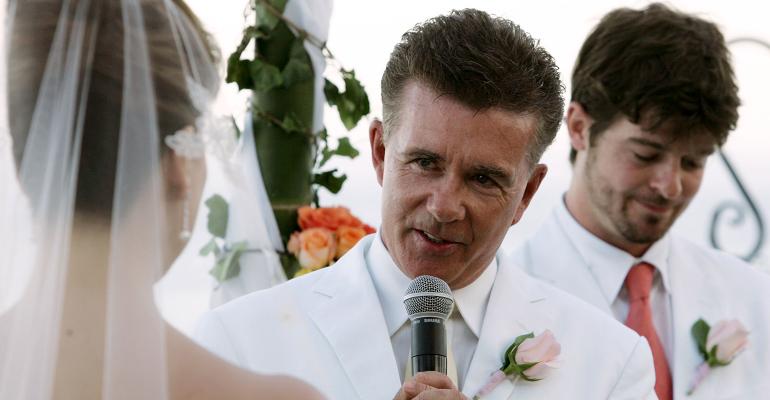 Brennan and Robin Thicke may be blurring the lines of fiduciary duty.

In the most recent installment of celebrity estates gone awry, Alan Thicke’s widow, Tanya Callau, is reportedly claiming that Thicke’s sons are recklessly spending money from his trust and have yet to hand over her portion of the inheritance. The latest allegations are part of an ongoing dispute between Callau, Thicke’s third wife, and his sons from a previous marriage, Robin and Brennan, who are co-trustees of his estate.

According to documents obtained by TMZ, the sons didn’t approve of a burial site monument arranged by Callau and refused to reimburse her for it. Meanwhile, she claims, Robin was reimbursed $105,000 for a memorial bash the night before Thicke’s burial that she wasn’t on board with. Callau also believes she’s being unfairly charged for expenses and taxes that aren’t her responsibility. And if Robin and Brennan fail to comply with her demands to be more transparent with the administration of the estate, she’s allegedly threatening to take them to court.

Would Callau prevail if she does in fact file a lawsuit? As our readers well know, trustees owe a fiduciary duty to the beneficiaries. That means that they have to act in the beneficiaries’ best interests and will need to account for all of the activities of the trust. According to Jonathan S. Forster, an attorney and shareholder at Weinstock Manion in Los Angeles, who isn’t affiliated with the case, “If [the sons] are breaching their duties or otherwise misspending trust assets, they could be liable for damages. That being said, it is quite common for trustees to withhold making distributions until after the estate tax return has been filed, which is oftentimes 15 months after the date of death. This is particularly true in contentious relationships.”

Although we don’t know exactly when or if the estate tax return has been filed, given that Thicke passed away back in December 2016, Callau appears to have reasonable grounds to bring an action and a judge could potentially rule in her favor if her aforementioned allegations are found to have merit.

Callau already has one victory under her belt. Last September, she prevailed in court after a judge rejected a petition filed by Robin and Brennan to block Callau from challenging her prenup, finding that there’s no indication that Callau was planning to take such action.

Great thought and care is required whenever dealing with a blended family, such as this one. According to Robert Strauss, attorney also at Weinstock Manion in Los Angeles: “This is especially the case where the client would like one family member to be in charge of another family’s member’s assets and even more so where the client would like the different family members to become co-owners of certain assets together, all of which is made even more challenging when it can be reasonably anticipated that the family members may not get along and work well together.” Though we can only speculate whether Thicke could have anticipated his family not getting along in this case, Strauss went on to say that “this unfortunate fight underscores how vital it is to create a comprehensive, well-integrated and clear estate plan,” including the prenup.

As we previously reported, it seems that in this case, Thicke did seem to have a comprehensive estate plan in place (including the aforementioned prenup Callau signed, although the circumstances under which it was signed might raise some eyebrows). Nevertheless, taking extra caution when working with clients who have mixed families is sound advice, as perhaps they can particularly benefit from a no contest clause, outside trustees or other additional measures.