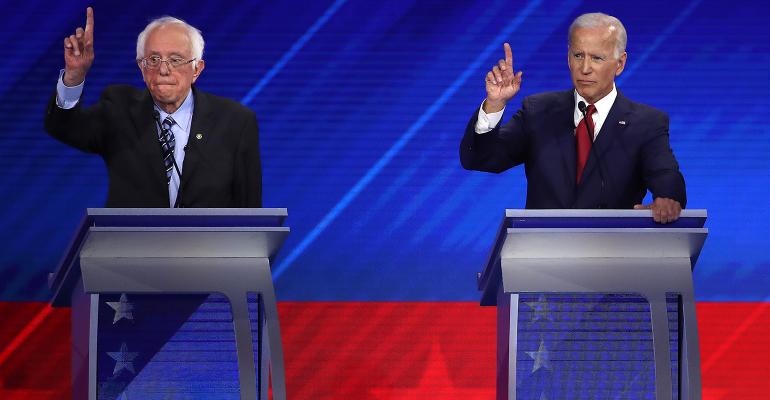 Will proposals to tax and redistribute wealth see the light of day?

Presidential election seasons help to elevate issues and policy proposals, for better or for worse, and this year is no exception. Unfortunately, we’ve seen a slew of proposals to tax and redistribute wealth according to certain, often arbitrary thresholds, and they’ve gained support from several candidates, at both the presidential and congressional levels. However, whether those ideas see the light of day will be based on the outcome of the election, which we’ll address here. But let’s start with the proposals.

The first of these tax proposals we’ll call the “been there, done that” bucket. In here are changes to the estate tax, including lowering exemption amounts, raising the rates and eliminating stepped-up basis; increasing income tax rates; and mucking around with taxes on investment gains. We’ve seen these proposals before, and should the next president be a Democrat, we can expect to see any number of these changes proposed early on.

The other more interesting bucket we’ll call the “fashionable” bucket. In here are new ideas catapulted to national conversation because of social drivers, like making the uber wealthy pay for grandiose policies.

The wealth tax is an example of this. A version of it was proposed by almost every viable Democratic candidate this election season but not without substantial criticism. To tax something, you must put a value on it, and in some cases—like art and stock in private companies—value can be subjective.

And what about wealth that isn’t owned, but controlled? For example, what about the assets that a donor earmarks for charity by transferring those assets to a family foundation or donor-advised fund but still exercises some measure of control over? Well, UC Berkeley economists Emmanuel Saez and Gabriel Zucman urge not to leave those honeypots untouched.

Why do we care what they say? Because they’re the key architects of the wealth tax that both Sens. Warren and Sanders claim, so they have influence. And after this election, we’ll either have one of the proponents in the White House or both agitating for a wealth tax as sitting U.S. senators.

Let’s be clear. Taxing assets earmarked for charity would be a devastating blow to civil society. The past 10 years have seen a steady drop in the number of donors to charities, and the Tax Cuts and Jobs Act (TCJA) contributed to that trend. Charities also tell us that the TCJA caused a drop in overall giving. So, levying additional tax on the resources on which those charities, and respective communities, rely would exacerbate both trends.

But there’s precedent, and that’s what has charities and donors worried. As part of the TCJA, Congress passed a tax on university endowments, which, however you may feel about the largesse of these universities, are clearly charitable assets. But students pointed to their skyrocketing debt load and made the case that, well, those institutions' endowments just have more than they need, and Congress reacted with a punishing tax.

So a wealth tax could happen. But is it likely? It depends on the outcome of the election.

Status quo. Assuming the election doesn’t change the balance of power in Washington, Sens. Sanders and Warren will remain in key leadership positions from where they can continue to shake things up and propose additional taxes on the wealthy. Majority Leader Mitch McConnell should be able to stop most wealth taxes from passing in the Senate, notwithstanding what happens in House Speaker Nancy Pelosi’s chamber.

So, they’ll have a megaphone for their proposals but no real path to get them enacted.

Democrats win the White House. We can expect a wealth tax to remain center stage because the current top-tier candidates have proposed some version of a wealth tax, and other policymakers are demanding it. Buttressing their expanded power, Leader Pelosi will likely allow a slew of hearings in the House of Representatives highlighting the economic inequality that could be addressed with wealth taxes.

In the Senate, Leader McConnell just may have to agree to some taxes depending on what they’ll  be used for, like new infrastructure spending, which tends to be a bipartisan issue.

At the same time, we can expect Republicans to push back on a straight wealth tax, quoting former Obama Treasury Secretary Larry Summers. To be fair, Summers has other ideas to rebalance wealth and income inequality that he views as more effective than a wealth tax.

Democrats win the White House and the Senate. Buckle up for a bumpy ride. At best, we won’t get a wealth tax as the candidates are proposing, but they’ll pass steep taxes on higher income individuals, claim success and move on. At worst, the assets of the wealthy, maybe even including those earmarked for charity, will be tapped to pay for progressive policy proposals.

Republicans win the House. This seems to be the least likely outcome and probably not worth mentioning, but Democrats in Washington are plenty nervous about Senator Sanders as the potential Democratic nominee. And that’s because many of those Democrats who won in 2018, elevating Nancy Pelosi to Speaker, are in districts that Trump won in 2016, meaning swing districts where an avowed socialist candidate on the ticket might be viewed as a huge negative.

If this comes to be, we’re looking at another round of tax cuts and the wealth tax will be a distant memory. That is, until the next election.