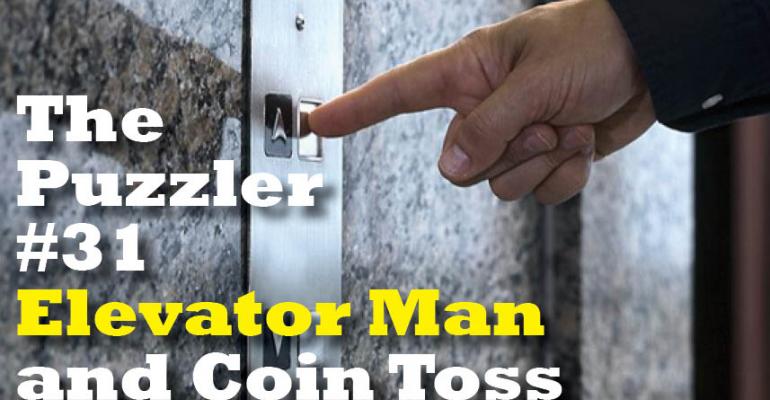 Think you’re smart? Try these brainteasers that recruiters use in actual job interviews.

Please e-mail your solution to John Kador at [email protected] using the subject line "Elephant Man." Deadline is August 1, 2012. One entrant with the correct answer (or a creative alternative) will receive a signed copy of John Kador's How to Ace the Brainteaser Job Interview. Good Luck to all.

A couple of advisors for a big wirehouse are attending a company picnic. Bill says, “How many people do you think are here?” Lois looks around for a minute and says, “Looks like the entire staff is here. I’d say about 1,100 people in total.”

Bill says, “You’re very good with numbers. Would you like to make a bet?  If we flipped a coin 10 times, do you think there’s anyone at this picnic who could call it correctly 10 times in a row?”

Lois says, “I suppose there’s a chance, but the odds say it’s got to be a pretty small chance.” Bill replies, “I think there is a chance. In fact, I’ll bet you $1,000 to your $10 that it can happen at this picnic, that there’s one person who could guess a coin toss correctly 10 times in a row.”

Should Lois take this bet?


See solution at the bottom of the page.

To recap: Four stockbrokers have just built new offices and are in the process of moving in when they realize that they have all neglected to purchase the same critical product. They all rush off to the hardware store. Later they meet up and compare their purchases.

We received over 75 responses to this puzzle. Responses ranged from light bulbs to mailing boxes. Not quite. This issue’s winner is Jacob W. Ruggles, managing partner, KMJ Financial Group, Whitehall, Pa., who writes: “Each stockbroker purchased their respective office/suite number(s). The first stockbroker purchased the number two, the second purchased the number three, the third purchased numbers one and four, and finally the fourth purchased numbers one, zero and six. Evidently, they all paid the same price per number: $8.00!”


Congratulations to Jacob Ruggles, who will receive a signed copy of my book How to Ace the Brainteaser Job Interview.


Solution to coin toss:  No, it’s a sucker bet and Lois will lose. Bill’s victory is a matter of mathematical certainty. Any crowd with at least 1,024 people will ensure that one person tosses a coin correctly 10 times in a row. Think about the 1,024 people in terms of 512 pairs. Each pair tosses a coin, resulting in 512 winners. Take those winners and divide them into 256 pairs. With 256 people flipping coins, there will be 128 winners. You do that nine times and you’re down to two people. The winner of that coin toss will have tossed correctly 10 times in a row.