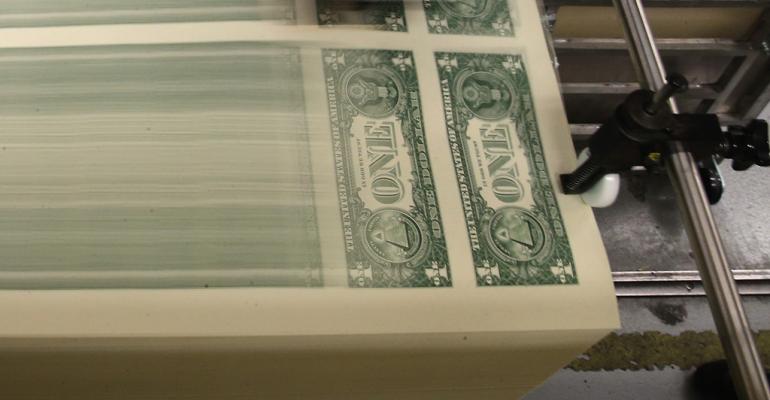 Why the $50 Trillion Cash Hoard May Not Prevent a Crash

Just because there's more cash in the financial system doesn't necessarily mean that it's available to buy securities.

(Bloomberg Gadfly) --There’s been a lot of discussion about how much cash investors are holding these days.

BlackRock puts the figure at more than $50 trillion, a figure that includes a host of different metrics, from central-bank assets to financial-firm reserves and consumer savings accounts.

Other measures show a similar trend. Private-equity firms are amassing great piles of liquid securities, with Blackstone saying that nearly one-third of its assets are in cash. Fund managers in general have boosted reserves as a share of their portfolios to levels that match the highest since 2001.

So what is the meaning of this trend toward bigger cash cushions? Several weeks ago, my response was to say that all this money will support asset values going forward. That may have been too simplistic.

Just because there's more cash in the financial system doesn't necessarily mean that it's available to buy securities, nor that it'll prevent a repricing of debt and equities that have been propped up by years of unconventional monetary policies. In fact, it could even indicate more risk out there, as one reader astutely noted. Fund managers may be holding more cash to offset a bigger pool of leveraged derivative bets, which may or may not be sufficient to compensate for the risk.

Some investors have explained their motivations for boosting their cash-like assets. One big reason is that many are worried bonds and stocks will continue to move in tandem. For years, both government debt and equities have generally rallied together on the heels of the Federal Reserve's efforts to suppress borrowing costs.

"We're going into a much more tricky asset environment," said Ben Melkman, a former partner at hedge-fund firm Brevan Howard who left to start his own firm, in a Bloomberg Television interview. "The same way we've seen everything rally together, everything could sell off together."

In such a scenario, bonds that are thought of as haven investments won't provide the buffer against equity losses that they have traditionally, BlackRock's Russ Koesterich noted on Bloomberg Television Tuesday. So many investors are holding cash as a hedge instead of highly-rated government bonds.

Others are preparing to pounce on bargains that may arise in a possible reversal. KKR, for example, has been selling distressed energy debt to lock in gains.

All this cash in the financial system will probably mitigate the risk of a similarly catastrophic systemic collapse, akin to what we experienced in 2008. But that doesn't mean that prices can't decline substantially before the cash starts stepping in.

Investors are certainly skittish right now, as evidenced by their elevated liquid reserves. Their fear may be well warranted, at least in the short term.