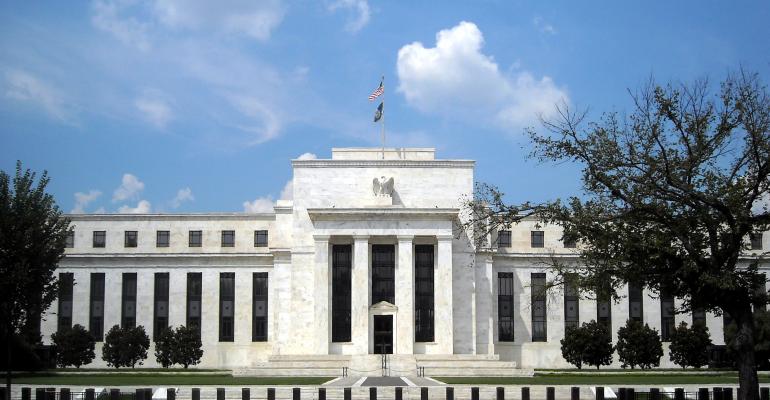 What Trump Will Mean for Interest Rates: Mohamed A. El-Erian

Judging from the initial market reaction to the presidential election, the robustness of this rather consistent gap between official and market projections of interest rates, could well be tested in the months ahead.

(Bloomberg View) --For more than two years, markets have priced in a lot less monetary tightening than was signaled by the Federal Reserve's “blue dots,” which represent the expectations of individual members of the Open Market Committee for the future path of interest rates.

The surprise election of Donald Trump is likely to affect this divergence for two distinct reasons, and the market implications are different depending on which of the two dominates in the months ahead.

An interesting picture emerges from comparing the median of the Fed's blue dots with what’s implied by the pricing of forward interest-rate contracts. After tracking each other rather closely, a noticeable gap began to appear in the first quarter of 2014. It widened and persisted, even though both lines have trended lower with quite a few bumps along the way.

Though a definitive analysis has yet to explain why the Fed has consistently signaled higher interest rates, several reasons have been suggested. These include excessive economic optimism at the central bank -- which has also led to repeated downward revisions in growth projections -- as well as differing sensitivities among Fed officials and market participants to spillovers from international developments and changes in the value of the dollar. And because the markets’ view has been validated by outcomes, some have even suggested that traders were leading Fed policies rather than the other way around.

Judging from the initial market reaction to the presidential election, the robustness of this rather consistent gap between official and market projections of interest rates, could well be tested in the months ahead -- for two reasons.

First, traders have quickly embraced a reflationary economic scenario based on the content of Trump's immediate post-election remarks, and in particular the pro-growth elements of his economic approach (including infrastructure spending, corporate tax reform and deregulation), as well as his lack of emphasis on the protectionist measures featured in his campaign that would expose the economy to stagflationary pressures in the short-run (such as tariffs on China and Mexico, and the dismantling of the North American Free Trade Agreement).

Content has been reinforced by tone. In his acceptance speech early on Nov. 9, the president-elect sounded an inclusive and conciliatory message that was reinforced by the comments of senior leaders of both political parties, including Hillary Clinton, House Speaker Paul Ryan and President Barack Obama.

The less-confrontational tone along with the focus on a pro-growth agenda has bolstered market sentiment, leading to a surge in stocks and setting a new record for the Dow Jones Industrial Index. In response, and even though it is still early days, some analysts already are inclined to revise upward their economic projections for the U.S., with beneficial spillover effects for the global economy.

Depending on how the president-elect proceeds from here, such expectations may not be the only factor leading to the repricing of interest-rate markets that already have included a spike in 10-year Treasury yields to 2.14 percent. A second factor has to do with the post-election signals from some of Trump’s economic advisors who seemed to question the effectiveness of prolonged central bank stimulus and expressed concerns that such measures were creating a “false economy.” These indications followed complaints during the campaign about the independence of the Fed and the competence of its leadership.

If such signals become more frequent in the weeks ahead, and it is not certain they will, the potential convergence in interest rate expectations would take on a different complexion. By triggering market concerns about the operational autonomy of the Fed, an attribute that has benefited the U.S. economy, higher bond yields would likely be accompanied by weaker stocks, thereby risking headwinds to economic growth.

Trump’s ascent to the White House is more than a seismic political shift. It has already moved markets and is influencing expectations about economic prospects. If he continues to emphasize the positive elements of his economic agenda, refrains from the actions that risk stagflation, and if all this is reflected in a constructive implementation effort with Congress, his administration has the potential to encourage interest-rate convergence consistent with higher economic growth and greater financial stability.