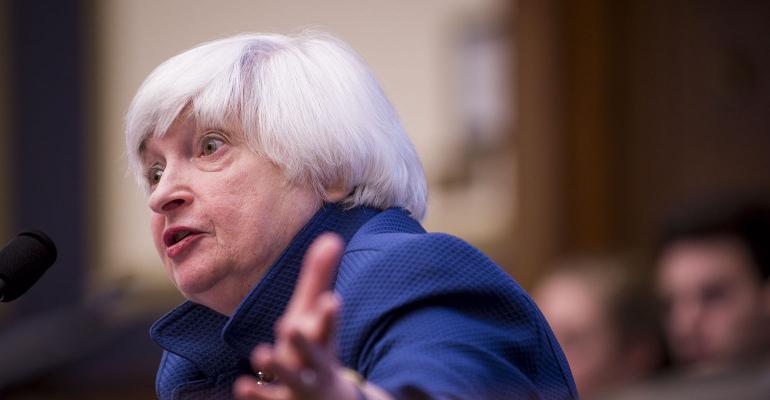 It's not just a U.S. problem. Yields on Eurozone, U.K. and Japanese benchmark bonds are all close to historic lows.

Interest rates are low, but is this a problem? After all, in times gone by the worry was that rising interest rates killed off economic expansions. You know the story: inflation picks up as economic slack diminishes, central banks slam on the brakes, and recession follows. Since the global financial crisis, however, interest rates (and inflation) have been notable by their weakness, not their strength—and yet policy makers are still unhappy. Why?

The U.S. Federal Reserve (the Fed) is certainly concerned. Both headline and core U.S. inflation—stripping out volatile food and energy prices—have declined recently, and are running below 2 percent. Most measures of pay growth remain very subdued, despite an unemployment rate of only 4.4 percent. Survey-based indicators of longer-term inflation expectations are also stable. So the Fed looks to be comfortably meeting its dual mandate of maintaining stable prices and maximizing employment. But the central bank’s decision makers continue to take the view that “economic conditions [will] evolve in a manner that would warrant gradual increases in the federal funds rate.”

Why is the Fed worried? For a number of members of the Fed’s decision-making committee, the fact that ‘real’ activity measures are strong is enough to merit further rate rises. Unemployment is, after all, solidly below the Fed’s estimate of the rate at which pay pressures start to build. The world economy is also in reasonably good health. On this reasoning, a pickup in wage and price pressures could be just around the corner—and any delay to rate increases risks falling behind the curve. For others, financial-stability concerns weigh heavily. Low interest rates could damage stability by encouraging excessive risk taking in the search for higher returns, or by squeezing financial companies’ profitability. Some members may also be hoping to refill the policy locker ahead of the next economic downturn. If interest rates are still low when another shock hits, the economy could fall into a "liquidity trap"—an inability to cut interest rates enough to return the economy to potential.

The Fed may also have other, longer-term, concerns. After all, U.S. long-term interest rates are also close to all-time lows. These rates reflect both investors’ expectations of future inflation and the expected path of real (inflation-adjusted) interest rates. On the former, credible central-bank inflation targets and low rates of recorded inflation may have stabilized anticipated inflation at relatively low levels—which is not a bad thing. On the latter, however, expectations of lower future real interest rates may be a symptom of a number of developments that have (on the Congressional Budget Office’s estimate) halved the economy’s growth potential from pre-crisis norms—and this is less welcome.

Disappointing productivity growth, slowing labor-force expansion and an aging population may all have contributed, in part by reducing the number of business opportunities that firms can profitably undertake. Heightened economic and political uncertainty may also have prompted companies to delay investment decisions. Firms may additionally be hesitating to invest in long-standing business models in the face of potentially disruptive new technologies. So if long-term growth prospects are weaker, and there is the risk of a vicious cycle of low growth and weak investment, this suggests that the liquidity trap could remain in play for some time to come.

And if low interest rates are a problem, the U.S. is not the only economy in the firing line. After all, yields on Eurozone, U.K. and Japanese benchmark bonds are close to all-time lows. And as Fed Deputy Chair Stanley Fischer has recently pointed out, interest rates in economies from South Korea to Israel have fallen by as much as 400 basis points since the financial crisis. Why has the decline in interest rates been so widespread? One answer is that many of the factors driving down interest rates in the U.S. have also affected other countries—including demographic changes and the disappointing performance of labor productivity. Another is that the global economy is highly integrated, so we would expect developments in one part of the world to influence other countries. The buildup of a “global savings glut,” for example, is often credited with keeping global long-term interest rates low even as U.S. policy rates rose in the pre-crisis period.

So if low interest rates are a global phenomenon, and a potentially problematic one, what should policy makers do? The answer depends partly on the phenomenon’s persistence. Some of the factors bearing down on trend growth could dissipate. This is particularly true for the emerging markets, where demographics are more favorable and there is scope for labor-force expansion via increasing access to education and female participation. For some of these countries, improved welfare safety nets could also reduce the incentive to save, shrinking the savings glut. In the advanced economies, there is the possibility of an upside inflation shock—if the supporters of rate increases based strong real activity are correct—which could reset investors’ expectations of future central-bank behavior. The developed world’s disappointing productivity performance could also turn around if, as occurred in the 1990s, innovation diffusion leads eventually to a pick-up in investment.

What are the options?

But if the factors dragging down interest rates are as persistent as some central bankers fear, there are essentially two options. First, they can ensure that monetary policy is set in as clear and effective a manner possible, whether this is the level of interest rates or balance-sheet adjustment. "Good" policy can, on this argument, boost confidence in the stability of the growth outlook, reducing the incentive for precautionary savings and encouraging investment. Easier said than done, perhaps, but the second option may be harder still. From Janet Yellen to Mark Carney, central-bank governors have been pretty vocal in pointing out that monetary policy is not a cure-all. Policies to boost economies’ long-term potential—and therefore long-term interest rates—are more likely to come from governments than from monetary authorities. So far, their pleas have largely fallen on deaf ears. Could it take that next economic downturn—the one that is already worrying Fed decision makers—to force the hand of politicians?

Lucy O’Carroll is the chief economist at Aberdeen Standard Investments.