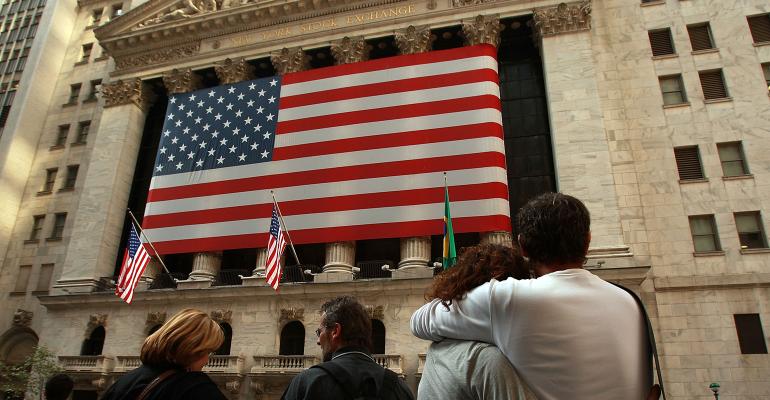 The changing outlook shows how pessimistic the bond market has become as hopes for reflation have faded and the Trump administration fails to deliver on its fiscal-stimulus promises.

(Bloomberg) --Wall Street is falling further and further behind in assessing the direction of the $14.1 trillion Treasuries market.

In March, the consensus was for 10-year yields to be well on their way to 3 percent by now. Inflation and economic growth would take hold, and the Federal Reserve would potentially tighten three times in 2017 -- perhaps even four. Or so the argument went.

Fast forward to the present, and the 10-year yield is barely above 2 percent, a key psychological level, which means going back to the drawing board yet again. Forecasters now see 10-year yields rising to 2.48 percent at year-end, according to the latest Bloomberg poll. The projection for the end of this year is the lowest since November, just like yields themselves. As for clearing 3 percent? Wait until 2019. “I always say if you can’t forecast, you forecast frequently,” said Dimitri Delis, senior econometric strategist in Chicago at Piper Jaffray & Co. His year-end prediction for the 10-year yield has been 2.1 percent since March. “We’re in a disinflationary environment that will be with us for several years. That’s what’s been keeping the 10-year rate trending down.”

The changing outlook shows how pessimistic the bond market has become as hopes for reflation have faded and the Trump administration fails to deliver on its fiscal-stimulus promises. For analysts swept up in those expectations, which pushed the 10-year yield to a two-year high of 2.64 percent in December, it’s been a scramble to revise forecasts lower. For those who wagered that structural forces like an aging population and slow productivity would win the day, 2017 has been about as expected.

The Fed’s preferred inflation gauge has declined for five straight months since climbing to 2.2 percent in February, the highest reading since 2012. At 1.4 percent as of July, it’s well below the central bank’s 2 percent goal.

That’s a stark contrast with policy makers’ “ dot plot,” which implies roughly four quarter-point hikes over that period. To some strategists, the divergence signals that the market has gotten too pessimistic, meaning yields are bound to rise.

“We are probably getting to the low end of where we’ll go on this run down,” said Steve Barrow, a London-based strategist at Standard Bank. “Cooling in the North Korean situation, balance-sheet normalization and a rate hike leads me to think that yields will be a little bit higher.”

Barrow’s forecast in March was for the 10-year yield to increase to 3.4 percent by the end of 2017, among the highest in Bloomberg’s survey. His latest estimate is for 2.4 percent.

He’s come around to the view that if yields climb, they’ll do it slowly. He doesn’t see the 10-year yield touching 3 percent until about a year from now, at best. And if some unforeseen global conflict arises, you can toss that call out the window.

“If I’m significantly wrong on where that rate will be, it won’t be because it’s substantially higher, but substantially lower,” he said. “Then that’s really more a geopolitical issue.”